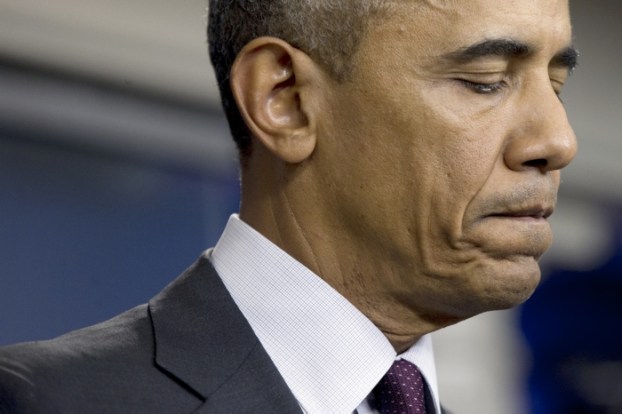 President Barack Obama pauses as he speaks in the Brady Press Briefing Room at the White House in Washington, Thursday, Oct. 1, 2015, about the shooting at the community college in Oregon. AP photo

Hurricane Joaquin dumped large amounts of rain on the East Coast, but another “force of nature” flooded the country with so much rhetoric it was difficult for most people to keep up.

Before barely any facts were known, there was President Obama on camera (when isn’t he?) making a 12-minute address — a relatively short time for him — about the school shootings in Roseburg, Oregon. The president referred to himself 28 times, according to Grabien.com, again proving that whatever happens in this country, or the world, it really is all about him.

He talked about the need for “common sense” gun laws, and yet in the case of the Oregon shootings, as in so many other similar tragedies, he never mentions the responsibility and moral guilt of the shooter.

Someone intent on killing other human beings will not be deterred by more gun laws. Law-breaking is what criminals do; otherwise they would be law-abiders, a word that applies to responsible gun owners. And those “gun free zones” are just advertisements to potential killers not to expect armed opposition to their shooting spree. One might as well replace a sign warning that your home has an alarm with one that says the door is unlocked, come in and take what you like.

Perhaps the president might consider telling us what law, short of gun confiscation, would prevent, or substantially reduce, gun violence. He won’t, because as he admitted, he wants to “politicize” the Oregon shooting.

And what of the mentally ill? The Oregon shooter’s neighbors recognized that something was a little off about him, but no one said anything to authorities. Would more gun laws have broken their silence? Every last gun in the shooter’s arsenal, according to reports, was legally acquired. That’s with gun laws we have in place already. Would another law or two or three have made a significant difference?

Responding to reporters’ questions at the White House Friday (with each answer lasting 10 to 12 minutes), the president said he would not sign another continuing resolution to avoid a government “shutdown” now to come just before Christmas. He chastised Congress for its failure to pass a budget, ignoring the real obstructionists, the Democrats, with their filibusters and manipulation of Senate rules.

And the president called for an increase in the debt ceiling so we can “pay our bills.” But in 2006, when he was a senator from Illinois and George W. Bush was president, Obama voted against raising the debt ceiling. At the time he said, “The fact that we are here today to debate raising America’s debt limit is a sign of leadership failure. It is a sign that the U.S. government can’t pay its own bills … I therefore intend to oppose the effort to increase America’s debt limit.”

If the president were serious about paying down the debt, he might start with a Government Accountability Office report released recently that reveals improper payments to “deceased individuals or those who use deceased individuals’ identities” made by 124 programs across 22 government agencies. The GAO estimates these improper payments, which it says is a pervasive problem across government, totaled $124.7 billion in fiscal year 2014, an increase of nearly $19 billion over fiscal 2013.

New job figures came out last week and the president commented on them. He said 142,000 new jobs were added in September. He conveniently ignored these Bureau of Labor Statistics figures: a record 94.6 million Americans not in the labor force (the lowest participation rate since 1977 during the Carter administration).

If President Obama were paid according to the number of words he uses, he would be a multi-billionaire. If that pay were reduced by the number of untruths he told — from “climate change,” to federal spending and the debt ceiling and budget, to the supposed effectiveness of more gun laws — he would be broke and in debt, like the nation he so poorly leads.

By Paul Stam Special to the Post The writer is responding to a recent column about the death penalty: Mr.... read more