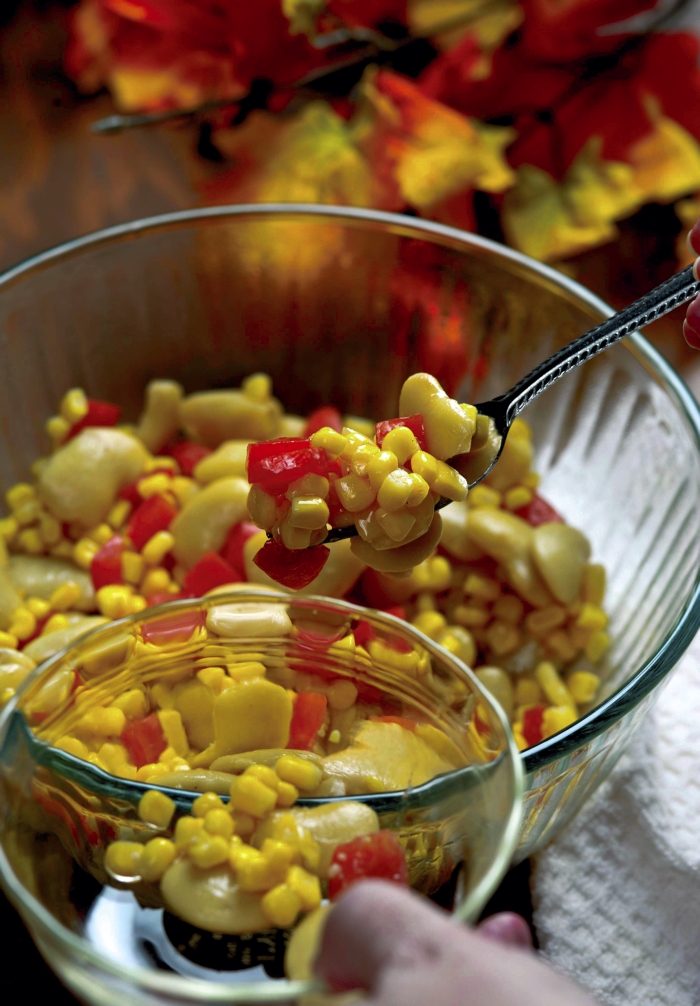 JON C. LAKEY / SALISBURY POST Big ol' butter beans in a cool corn salad is such a soothing comfort food it will make you want take your shoes off. Wednesday, September 30, 2015, in Salisbury, N.C.

Fall seems like the right time for beans — the kind you soak overnight and cook up with flavorful vegetables and meat.

Harvests of beans and peas wind down by fall, and we’re blessed with a bounty of options. The Savor the South cookbook series devoted one of their volumes to “Beans & Field Peas’ knowing how important those crops have been in the South for generations.

Author Sandra Gutierrez grew up in Latin America, where beans are also an important part of the diet.

In her longtime home of North Carolina, Gutierrez discovered how important beans are, a staple of so many tables.

Southerners may have memories of hulling peas on the front porch or just eating classics like pinto beans with onion and cornbread.

Gutierrez makes a point to include beans and peas, known as legumes, into her family’s daily diet because they’re healthy and everyone enjoys them.

She remembers the minestrone she tasted in Rome, Cuban black beans and rice in Miami and a bowl o’ red in Houston.

It was the wide variety of Southern peas that surprised her, though she’d eaten pigeon peas and black-eyed pea fritters  She learned to talk about pot likker, instead of her native caldos.

The poor of Brazil, Africa or Italy, along with Southerners, relied on peas, beans and grains for most of their food. Enslaved African Americans introduced or brought in traditional beans and peas, either with the slave traders, or later, when owners noticed their slaves would not eat. Gradually, the food crossed over to the tables of the landowners.

George Washington, no less, gets credit for bringing 40 bushels of seeds, including field peas, to his land in Virginia. Thomas Jefferson was a pea eater, and wrote about how to plant and cultivate peas. His table was often graced with black-eyed peas and lima beans.

Funny how those old ways are returning, as the local foods movement grows and diets change, with less emphasis on meat.

Beans have plenty of fiber and are full of potassium and vitamins A, B and D, as well as folic acid.

In the early days of cultivation, beans, corn and squash were grown together, forming a trinity Native Americans called the Three Sisters. In new, chemical free, sustainable gardens, the same method is used, relying on the stalks of corn for bean poles and squash as a ground cover to keep weeds down.

Early settlers of America ate succotash, a combination of the three. The nitrogen of the beans helped the corn grow.

Gutierrez writes that all beans, from green beans, string beans, fancy haricots verts to favas, belong to the same family. Peas, though, are from a different family not related at all to beans. Gutierrez asserts that canned green beans in the supermarket taste nothing like homegrown varieties.

She learned that being able to cook field peas (not green, so-called English peas) and biscuits was the standard by which Southern cooks are judged.

For Southerners, there are four kinds of peas — black-eyed peas (cowpeas), crowder peas, creamer and field peas. Within that group are hundreds of varieties of all shapes, sizes and colors.

Black-eyed peas date as far back as 8000 BC in Africa. Crowder peas become creamy when cooked, and can come in many colors, dried. Cooking generally changes the color to brown.

Hold on to your spoons — creamer peas usually refer to things like butter beans, which are beans, not peas.

The smallest of all is the field pea, often served with another vegetable.

Her collection of 51 recipes shines a fresh light on this varied staple of ordinary life, featuring classic southern, contemporary and international dishes.

Sandra A. Gutierrez is the author of Latin American Street Food and The New Southern –Latino Table. A well-known culinary instructor, she lives in Cary.

Most southern salads are simple to make, and this one showcases the flavors of summer. It offers a perfect trifecta of flavors (sweet, nutty and slightly acidic), colors (red, yellow and green), and textures (creamy, crunchy and soft). Every time I make it, I wonder how such an easy recipe can yield such a delicious dish. Try it, and you’ll see what I mean. If you let this salad rest for an hour or so before serving, the tomatoes will release their juices and add to the flavor of the dressing. Use fresh corn, scraped directly from the cobs, and fresh beans, if you can.

Place the beans in a pot and cover with water by two inches. Bring to a boil and cook for 5 minutes, skimming off the foam that rises to the top; cover, reduce the heat, and simmer for 35–40 minutes or until tender

Meanwhile, fill a bowl with iced water. When the beans have finished cooking, drain and immerse them in the ice bath until cool. Drain the peas and transfer them to a large bowl; add the corn and tomatoes.

In a small bowl, whisk together the vinegar, salt and pepper. Whisk in the oil and pour the dressing over the salad; stir until combined.

Nutty beans meet vibrant citrus and spicy chiles. Then they’re topped with sweet, plump shrimp, yielding a salad that features the colors of autumn. Speckled butter beans are among the most beautiful members of the lima bean family (Phaseolus lunatus). When dried, they are a purplish-brown color, mottled with pinkish spots. When cooked, they produce a dark pot likker, and although they lose their speckled appearance, they retain their beautiful color. It’s not as crazy to call this salad a ceviche as you may first think. The beans are cured in the same citrus and chile dressing used in traditional Peruvian ceviches, and in Latin America this qualifies as one. Ají amarillo peppers are found pickled, in jars or cans, in most Latin American stores. If you can’t find them, use fresh jalapeños instead. Shrimp are measured by how many are in one pound and the ideal shrimp for this recipe are large and plump. Not all shrimp turn pink when cooked (it depends on the variety); make sure you cook them well but take them off the grill when they begin to curl (a sign of doneness). For a vegetarian option, simply omit the shrimp.

To make the ceviche, in a medium bowl, combine the beans, lemon juice, onion, cilantro, ajíes, salt and pepper; mix well and chill for at least two hours (up to overnight), stirring occasionally.

To prepare the shrimp, peel and devein them, leaving the tails intact. Place 6 shrimp on each skewer. In a small bowl, combine the garlic powder, cumin, salt and pepper; sprinkle the mixture over the shrimp, making sure to coat them well.

Heat an outdoor grill or indoor grill pan until very hot. Grill the shrimp for 3 minutes on the first side or until they’ve turned opaque; turn and grill for 3–4 more minutes or until cooked through. Transfer the bean ceviche to a large platter and top with the shrimp skewers.