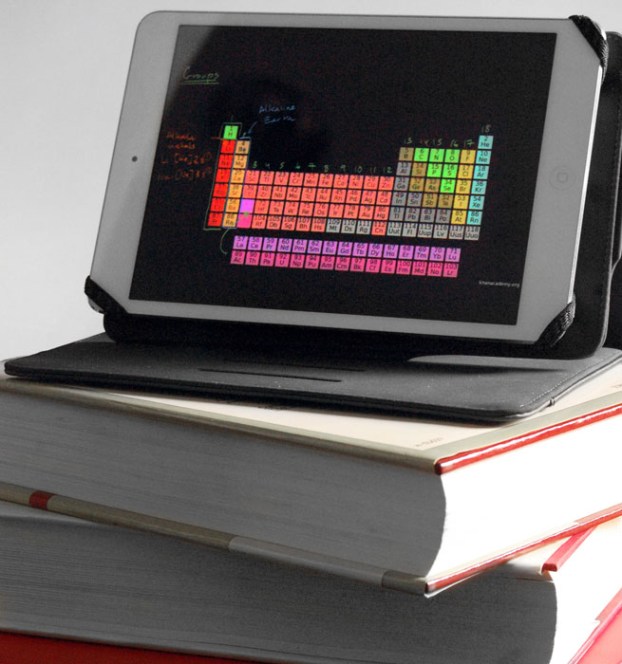 An iPad app displaying an interactive lesson on the periodic table of elements is seen on a stack of books. More classes are using digital applications instead of traditional textbooks. Photo by Andy Mooney, Salisbury Post.

The students in Renee Fox’s middle school math class are helping cats back to their owners and playing on number lines the hallways.

Welcome to the new way of learning math.

Students in the Rowan-Salisbury school system are using fewer textbooks and more techbooks, digital textbooks that the students can access on their iPads.

The techbooks are offered through Discovery Education, an organization that provides educational digital content to schools.

“That is a complete online interactive platform,” Feimster said.

Fox, a teacher at West Rowan Middle School, said students are able to practice numbers using games with objectives like getting a cat back to its owner. In the game, students have to plug in the correct positive or negative number to move the cat towards its owner.

“It’s not just, ‘Here’s your textbook on digital where you flip pages.’ It doesn’t even feel like a book,” she said.

Fox also set up a number line in the hallway where students could physically move themselves up and down the line to practice positive and negative numbers.

Students said they liked that they did not have to wait for a teacher to give them feedback.

“It tells you if you got it wrong and it tells you what you should fix, then it gives you more things to practice,” one student said.

“The kids now are so used to, with gaming and computer access, looking up things that they’re interested in,” she said. “This is kind of right in their wheelhouse.”

Miller said students are more engaged and participatory in her classroom.

“There’s nothing better than looking around and seeing the kids actively engaged in the learning that you wanted to take place anyway,” she said.

Fox said the techbooks are a great starting point for teacher planning.

“It shows us what (students) should have learned previously to get them where they need to be and where are they going ahead,” she said.

The techbook gives teachers a list of learning objectives for their students, along with conceptual understandings and misconceptions, Fox said.

Fox said the different activities the techbooks suggest are things she never would have thought of.

“I didn’t have to search in three, four, five different places to find this awesome, engaging activity. It was all in one place for me,” Fox said.

Miller has been teaching for 22 years, and she said she is reinvigorated by the techbook.

“I’ve tried lots of things that I’ve never tried before and I’ve really enjoyed it. It’s kind of a new inspiration,” she said.

Miller also said that using the new technology in the classroom can be intimidating, but it is worth effort.

“You think, gosh, this can work. It might be a little scary for me, but it’s not for the kids,” she said. “It’s right where they want to be.”

Although having iPads in the classroom may be cause for some distractions, Miller said teachers just have to monitor what their students are doing, just as they always have.

“You always had kids then too who would try not to do what they were supposed to do. You know, the student that looks like they’re taking notes but they’re actually drawing pictures,” she said.

“Students have gotten much better about knowing the boundaries as far as what they should and shouldn’t be doing and the consequences if they are not doing the proper things,” she said.

Miller said that although it was a transition for her, the good outweighs the bad when it comes to techbooks.