Storms leave some flooding, damage, but not as much as feared 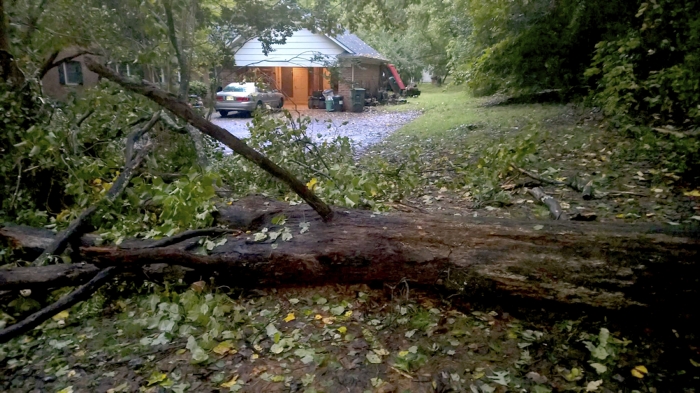 SUBMITTED PHOTO Weekend rains produced some flooding and downed trees, as in this neighborhood near Salisbury, but no major disruptions were reported.

As the East Coast breathes a sigh of relief at Hurricane Joaquin’s turn away from shore, the storms that moved through Rowan County early Saturday morning have subsided.

But they have left behind downed trees, canceled events and frayed nerves.

Rowan County Chief of Emergency Services Frank Thomason said that, overall, less rain has fallen over the area than was predicted.

“The rain has fallen in sufficient quantity, and heavy enough at times, to cause some minor flash flooding of a few streets around the county, but nothing major,” Thomason said in a phone interview Saturday evening.

A handful of trees have fallen on houses around the county, Thomason said, causing structural damage, but no injuries that he was aware of.

Falling trees remain the biggest hazard of the storm for the foreseeable future, he said.

“The ground is soggy-saturated, just completely full,” Thomason said. “Any amount of wind makes it a lot easier for trees to go over. I would expect us to continue to see additional reports of trees falling.”

In eastern Rowan County, some 1,500 Duke Energy customers were reportedly without power Saturday morning. Thomason said power had been restored by Saturday night.

“We’ve had a handful of traffic accidents across the county. Some of those have resulted in injuries, but no fatalities that we’re aware of,” Thomason said.

Many Events Called Off

Festivals, fairs and sporting events throughout the Piedmont were canceled this weekend due to the threat of severe weather.

Along with the early closure of the Rowan County Fair, this weekend’s Autumn Jubilee was called off for the first time in its 35-year history and will not be rescheduled.

In a phone interview Saturday, Don Bringle, of Rowan Parks and Recreation, said he knew that this was a disappointment to many people.

But it’s impossible to have a rain date for Autumn Jubilee, Bringle said, because of the size of the event.

“A lot of the crafters that follow us year after year will be somewhere else next weekend. They go from festival to festival,” Bringle said.

In all, 180 crafters and 12 food vendors were scheduled to take part, Bringle said.

“I truly regret that we had to cancel, because it affects a lot of people,” Bringle said. “I know families use this as a reunion, and you see a lot of the same faces year after year. It’s just a bad situation.”

Even so, Bringle said, since North Carolina declared a state of emergency, calling off the event was the right choice to make sure no one was hurt.

In the meantime, Bringle said that any school groups, daycares or churches interested in purchasing some of the 1,800 face-painting pumpkins that would have been used Autumn Jubilee can buy them at cost.  Interested groups can call the Dan Nicholas Park office starting Monday, 704-216-7800.

A flash flood watch remains in effect until Monday morning, but things are looking up.

The National Weather Service is predicting rain showers to continue through Monday, with new rainfall of between three-tenths and three-quarters of an inch possible.

The rain is expected to taper off by Monday night, with sunny skies and highs in the 70’s predicted to return by Tuesday.