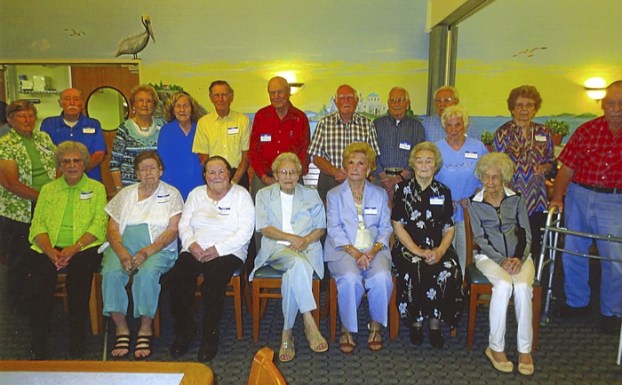 Norman and others shared information about class members who were sick and unable to attend. He welcomed our special teacher Jean McCombs. After the blessing everyone enjoyed a wonderful meal.

Norman also provided entertainment for the group. He and other shared stories and experiences of our times together at Rockwell High.

It was decided to have next year’s reunion at Blue Bay.

The South Rowan High School Class of 1962 celebrated its 53rd reunion on Sept. 19 at the Club at Irish Creek in Kannapolis. Following the social hour, Dr. Frank Martin welcomed the group.

Wayne Spears gave the invocation. After the meal, a memorial service to remember the 43 classmates lost by death was presented by Modena McCreary Weaver and Dickey Menius.

Patsy Hudson Parnell recognized special guests for the evening, former English teacher Mrs. Jane Faggart and husband, J. B. Faggart. Brenda Walters Welch read responses from classmates that were unable to attend. Wayne Spears led discussion on the next reunion. Door prizes, donated by classmate, Ralph Baker, were awarded to winners of the Remember When contest and the Reunion Superlatives.

Classmates were presented with directories prepared by Pam Turner Martin. The evening concluded with the class enjoying music, dancing, and a photo booth provided by Virtual Sounds.

On Saturday, Sept. 26, the Rockwell High School Class of 1959 held its 56th reunion at the fellowship hall of Organ Lutheran Church which was decorated with pumpkins and fall foliage by classmate, Christine Bame Graham. Forty two persons attended, of which 26 were classmates.

Following dinner John N. Trexler presented a program of comic relief which encouraged the group to remember the good times of 56 years ago, but also to enjoy our lives today as we “age gracefully.” We were reminded that it is important that we “not forget each other” and always remember how unique our class group is since we were the last class to graduate from Rockwell High School.

Carolyn Cauble Hartung read a poem as the group remembered classmates Karen Bostian Watkins and Gailya Fowler Kluttz, who had died during the past year. Classmates who had lost close family members were also remembered.

Get well cards were prepared for classmates and spouses unable to attend the reunion.

Door prizes were awarded and it was agreed the class would meet on Saturday, Sept. 24, 2016 for the 57th reunion.

Members of the Brown-Fisher families met at the Old Stone House, home of the late Michael Braun/Brown, on Sept. 19 for their annual reunion. Most of the Browns attending were descendants of Michael Brown, Sr.

President Stephen Brown welcomed the 85 members and friends. Attendees enjoyed a lunch of grilled hot dogs and hamburgers with all the trimmings, prepared by board members Larry C. Brown and Sarah Z. Brown.

Family with most members attending : The Ribelin family, nine members.

The first Fisher family reunion was held in 1916. 2016 reunion will be the 100th anniversary of the first reunion.

If you are interested in visiting the Rowan Redbuds Garden Club, call 704-754-8905 for more information.

B&P Antiques, 502 N. Long St., is hosting a craft and gift show benefit in memory of Jennifer Wolford, who died because of domestic violence in 2015.

The event will be Saturday, Oct. 10 from 9 a.m.-3 p.m. (rain date Oct. 11). Crafters, artisans and vendors are invited to participate. Call 704-636-6004 for table prices and reservations. All proceeds will go to support Rowan County families affected by domestic violence.

The Concord Spider Band Alumni Association is hosting an Alumni Night and re-dedicating the CHS band room to Ray Landreth.

The ceremony will be held on Friday, Oct. 30 at 6 p.m. in the a CHS band room before the football game. All CHS band alumni and family and alumni parents are welcome. Alumni are invited to join the band in the stands to play during the game.

To register or with questions email Jennifer Shatley at jshatley@icloud.com

Included in this year’s event will be horse training demonstrations, riding demonstrations, an equine massage demo, pumpkin painting (while supplies last) and face painting for the kids and the Hunt for the Golden Horse Shoes of Pantheon. New this year will be local vendors and a troupe  of authentic belly dancers.

The highlight of the day is the formal presentation of the Pantheon Arabians at 1:15 p.m.

During the party, the barn is open and all the horses are in their stalls for visitors to see and pet. Farm staff will be on hand to answer questions. There are several foals this year as well.

The event is free to the public, including the food. RSVP is requested for planning purposes by either a call or text to Billie Sullivan at 704-677-0853.

Introductions of the three speaker were done by Dorothy Funderburke, Rosalind Mitchell and Genny Reed.

The theme of the event was “Promoting love through confession and forgiveness, reconciliation and non-violence.”

There were nine denominations present and 20 churches represented.

Researching the horse’s role in the American Civil War

ARDEN — Joe Elliott is currently collecting poems, letters, sketches, essays and other writings about the horse’s crucial but much underappreciated role in the American Civil War.

More than a million horses died in the bloody four-year conflict, yet their vast contribution and sacrifice is often overlooked or ignored. Elliot’s plan is to compile the list of titles into a collection to be shared with educators and readers, to bring attention to this piece of history.

By Jennifer Nicholson Rowan Public Library The kids have been in school for about five weeks now; and yes, moms... read more