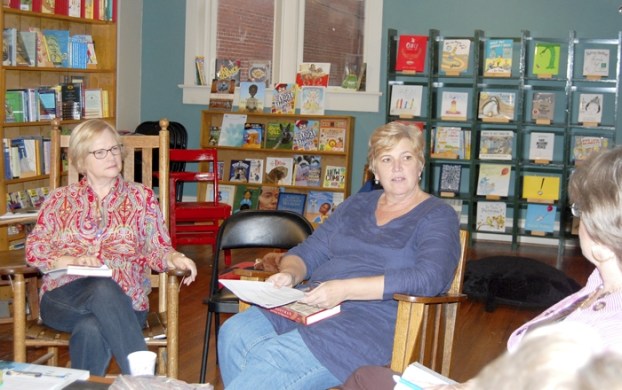 About 10 people gathered in the back of Literary BookPost for the first session of Jenny Hubbard’s new book club, The Last Tuesday Book Club, on Sept. 29. Hubbard and the group discussed “Trespass” by Rose Tremain, a book they all enjoyed, despite its dark tone.

Last Thursday, eight people gathered for Wendy’s Book Club, featuring Wendy Beeker, who works at the store and was recently in “Calendar Girls.” Beeker chose Alice Hoffman’s “The Marriage of Opposites.” Her club will be on the first Thursday of each month.

Hubbard, a former high school and college English teacher, said, “It was a chance for me to be back in the classroom, so to speak,” and she guided the club much as a professor would during class, asking questions, pointing out answers, drawing people out to tell her what they thought.

The one-hour format, from 11 a.m.-noon, would work as an early lunch hour for readers, who could easily bring a brown bag lunch. The seating is comfortable and drinks are available.

Others in the group had been teachers or worked in the schools, sharing a love of learning.

Hubbard had recently discovered Tremain, a much awarded British author and Francophile. “Trespass” is set in France. Many of her books are historical. Her most recent is a collection of short stories, “The American Lover,” published in America early in 2015.

Hubbard liked the structure of the book, which started in present tense, then moved to the past tense. Padgett appreciated how quickly the structure drew her in. Hubbard pointed out the characters were all motivated by things that happened in their childhood. “They’re defined by their past.”

And the discussion followed that path, as Hubbard pointed out all the characters are trespassing and being trespassed against. One of the readers pointed out the interview with Tremain in the back of the book, in which she talks about how people cope with the trespass of death, since few believe in an afterlife. Hubbard asked, “Could this be about her own exploration?”

Hubbard continued, “You’ve heard to write what you know, but Rose Tremain writes what she does not know. She seeks the strange, the unfamiliar to illuminate her novel.”

Wendy’s approach to the book club was to start the discussion and get everyone involved.  She used the reader’s guide from the publisher to spark conversation.

The group that joined her included Betty Mickle, who should win an award for most bookish in Salisbury. Others included a couple of former teachers, Cindi Graham and Robin Hendrick; JoAnn Nelson, Deanna White, who’s new to the area; Dr. Jessie Blumenthal and Wendy Williams.

All of them said they had a passion for reading. Beeker told them she wanted to get people out of their comfort zones with the books she picks. In “The Marriage of Opposites”  Hoffman explores how opposites work, so Beeker asked the group about the most obvious opposites in the book. It is historical fiction about the mother of painter Camille Pissaro.

Race and religion, wealth and poverty, searing heat and bitter cold are some of the opposites Hoffman writes about.

Mickle compared it to the works of Isabel Allende; Beeker to Gabriel Garcia Marquez. The discussion turned to identity, when it’s formed and how it molds who you are and what you do.

Readers talked about how vividly Hoffman describes Pissaro painting in an old barn, so vividly they could see the colors as if they were looking at the painting.

Beeker said the book was so engrossing that when she finished it, she wasn’t sure where she was.

They also discussed the strong women in the book who were powerful within their families and small sphere, but were denied any real power in the world.

In Beeker’s quest to challenge book club members, she chose “Out Stealing Horses” by Per Pettersoon for the Nov. 5 meeting.

She said: Saying “yes” to the dress I know this column is called “He said, She said,” but this month,... read more