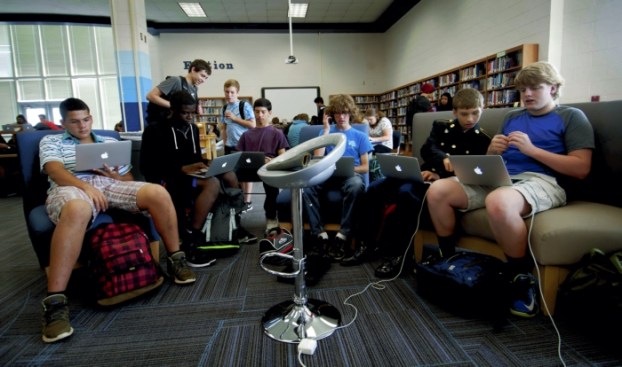 JON C. LAKEY / SALISBURY POST West Rowan students use their laptops in the media center during the Power U time period. West Rowan High school students take part in a program that started at the beginning of the school year which opened up several areas of the school for lunch and study. Power U allows the whole student body to break for lunch at 11:30 for one hour. Students can take advantage of the time to complete school tasks, seek assistance for problems and socialize and of course eat lunch. The media center has become a popular spot for students who can purchase salads and simple wrap sandwiches and sit in a cafe style. The concept feels simular to a college campus. Wednesday, September 30, 2015, in Mt. Ulla, N.C.

“There’s very little nonfiction left in any of our schools. They can get all that online,” she said.

Dictionaries, encyclopedias, atlases, almanacs and informational science books are all being converted to their e-book counterparts, according to Feimster.

Feimster said one positive of having the books digitalized is that reference books can be updated on a more frequent basis, which ensures that students are receiving the most current information.

She said the schools have subscriptions to Big Universe and Discovery Education, two programs that offer digital resources for classrooms.

“These are much more updated than going to the shelf in the 500 section of the media center and finding a book because they’re updated all the time,” Feimster said.

The school system also has access to the public library’s resources, through which every student can have a free digital library card.

“That’s one of the nice things about the students having iPads and laptops, is that they can access hundreds of thousands of e-books for free, anywhere,” Lawrence Persinger, media coordinator at Rockwell Elementary School, said.

Persinger said his media center has done away with 90 percent of its reference section, but did keep some dictionaries just in case the students needed them.

“There are going to be times when they might need a dictionary and they don’t have their iPad charged up or they forgot it,” he said.

Along with other renovations, the Rockwell media center has the Wonder Bus, a purple and pink Volkswagen, in it that has been repurposed into a space for students to have a cozy place to read.

The media center at West Rowan High School has also gone through changes.

Leigh Graham, media coordinator for the high school’s media center, said that along with reconfiguring the space to accommodate more seating for the students, the school has added the Falcon Bistro in a corner that serves healthy lunch options like sandwich wraps, salads and, soon, smoothies.

“The furniture that we purchased, we purchased it with the thought of getting students together to collaborate. They like coming in here,” Graham said.

Graham said the idea that media centers have no paper books is a misconception. In fact, the media centers at Rockwell and West Rowan had plenty of books lining their walls.

“We’re still really focused on literacy and I have a lot of kids who like to read,” Graham said.

Graham said students need places where they are able to communicate freely, and they cannot do that in traditional, quiet libraries.

“It helps them to bounce ideas off of each other and come up with new things,” Graham said.

Every day, West Rowan has a Power U hour in which students can do things like eat lunch, attend club meetings and participate in study sessions. During Power U, the media center can be seen buzzing with students. Some eat lunch together, others work on homework and projects and many choose to just talk and relax.

And over at Rockwell, students use the resources in the media center during the Genius Hour for research projects of their choosing.

Despite all of the technological changes, Persinger said he does not think paper books will ever be completely gone.

“Even today’s younger students, they love having the iPads and the laptops but I think there’s just something about being able to physically turn a page,” he said.

Storms leave some flooding, damage, but not as much as feared

By Hugh Fisher hugh.fisher@salisburypost.com As the East Coast breathes a sigh of relief at Hurricane Joaquin’s turn away from shore,... read more