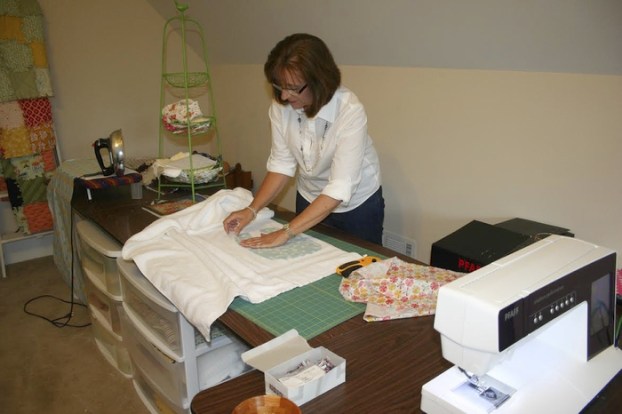 Angela works in a corner of her bonus room. Susan Shinn/For the Salisbury Post

Flossie Jean: Bibs and burp cloths made by hand in Rowan Since she was not quite ready to retire, Angela Graham started a home-based business, Flossie Jean, which offers bibs and burn cloths. ‘Chic Necessities for Today’s Baby’ is her business slogan. Susan Shinn/For the Salisbury Post When Angela Graham retired a year ago, the former Salisbury Academy librarian knew she wanted to do something different.

“I wasn’t ready to be retired full-time,” she admits. “I was a little bored, and I needed to be creative.”

So she bought a new sewing machine.

Angela’s mom taught her to sew, and she decided to fashion a home-based business around this talent. She settled on the idea of making baby bibs and burp cloths. They don’t have to be a certain size, she reasoned, and they’re easy to make.

Her daughter, Ashley Phipps, helped her design her business cards and rack cards — cards that tell the story of her business. She named her business after her mother, Flossie Jean.

And she started sewing.

Angela buys fabric just a little bit at a time. A yard makes about six bibs.

“I don’t buy from the big box stores,” she says. “I buy from fabric stores to get a better quality of fabric. I want my items to be boutique items. I do want them to be more unique and more personalized.”

Plus, she says, “There’s always a constant flow of new fabric.”

Angela buys fabric from her favorite designer, Tula Pink, and others. She favors graphic, not baby-ish designs. She doesn’t mind doing custom requests.

She found vintage motorcycle fabric for a baby whose dad was a motorcycle enthusiast.

If you’d like an item monogrammed, no problem, Angela says. She works with Bizzy B’s for that finishing touch.

Locally, her designs are available at Caniche, 200 S. Main St.

“I think they’re adorable,” says Lesleigh Drye, Caniche co-owner. “They’re practical, and the best part is that they’re made with love right here in Salisbury.”

Lesleigh says that Angela’s products follow the shop-local trend. “People are always interested when they see it’s local. We love supporting local business and I think other folks do, too. We’re really happy to be a part of that.”

“I love her things!” says Penny Moss, a co-worker of Angela’s from Salisbury Academy. “They are gorgeous! To me, her products look like they come from an expensive boutique.”

Penny has purchased bibs and burp cloths as shower gifts. “It almost makes me want to have a baby so I can use them — almost!”

Penny says that the items are well made. “You know you are getting quality. These gifts are made with love, and Angela puts her whole heart into each item.”

Angela is also trying to break into the Winston-Salem market. Her daughter, Ashley, and husband Devin live in Winston, and daughter Lauren lives here. Husband Gary works for Duke Energy.

When her daughters were young, Angela sewed all their clothes.

“That was just what people did,” Angela says. “In a way, it was custom-made, but we didn’t think of it that way. A lot of people don’t make things any more, so these gifts are special.”

Angela dreams of her products in South Carolina and maybe even to Georgia. For now, she spends about six hours a day at work. That’s on a disciplined week, she says. “Even on a non-disciplined week, it’s always on my mind.”

Angela has a Facebook page, and is toying with the idea of making custom changing pads. She’s made a few.

“I still think they need a bit more crafting,” she says. “I’m still working on those.”

When she’s not sewing, Angela enjoys gardening, running, and spending time with her family.

She’s gearing up for the Christmas gift season, and she’ll be part of a Christmas show in December at Wake Forest, as well as the Christmas bazaar at Forest Glen.

The unemployment rate in Rowan County dipped slightly in August from the previous month, according to figures released last week... read more