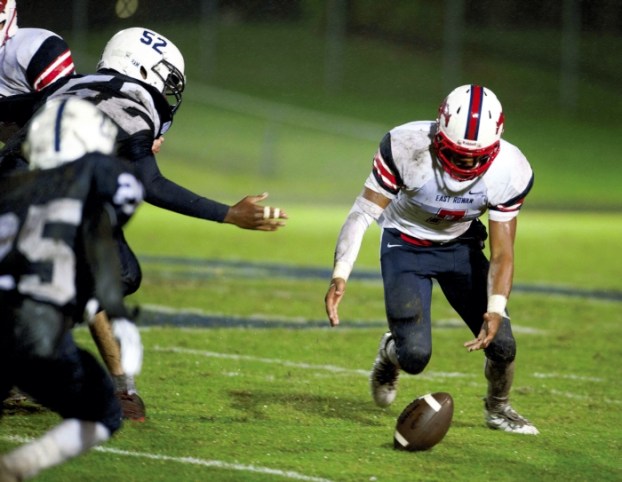 HARRISBURG — East Rowan’s football team hasn’t taken care of the ball this season in dry games, so there wasn’t much hope of limiting turnovers in a surreal contest played in the grip of Hurricane Joaquin.
East fumbled seven times and lost five. That was a stat that proved fatal in a 20-7 South Piedmont Conference loss at Hickory Ridge.
“We just keep shooting ourselves in the foot, and we can’t overcome it,” East coach Kenneth McClamrock said. “The sheer number of turnovers is unbelievable.”
East (1-5, 0-4 SPC) has lost the turnover battle 27-13 this season and lost it 5-1 on Friday.
Weather conditions were considerably worse than awful. Rain, mud, chilling wind — and then more rain and mud. It was miserable.
“I’ve never played in a game on a night like this,” Hickory Ridge QB Greg Waslo said. “Not just the rain, but the cold and the wind. Conditions were sloppy.”
Hickory Ridge is primarily a running team, with Waslo even more dangerous as a runner than passer. East, on the other hand, generally relies on its aerial attack.
“We knew going in that it was a night where both teams would have to run,” Waslo said. “We felt like that was to our advantage because we’re very good at running the ball. East is good at throwing the ball, but whenever they tried to throw tonight, the ball slipped out of their hands.”
McClamrock was well aware the field would dictate a battle of ground games and defenses, and he was OK with that.
“We came in with the idea of establishing the run from the start,” McClamrock said.
The Mustangs tried. Keith Tillman carried 15 times in the first half. He had a 16-yard run and one 8-yard burst, but Hickory Ridge won the tussles in the trenches and handled Tillman’s other 13 carries.
East had only three first downs in the first half, with one of those on a roughing the passer penalty.
Hickory Ridge scored a quick touchdown when Waslo escaped a tackle and steamed down the right sideline on a 52-yard scoring dash.
“I think I was able to score because their defenders couldn’t get good footing,” Waslo said. “They probably would have caught me.”
East shut out Hickory Ridge (4-3, 4-1 SPC) the rest of the half, with Wesley Porter, Christian Bennett, Jake Gregory, Bravon Goodlett, Bryson Johnson and Deiontae Gallman standing out.
“Our defense was lights-out, and that’s the third game in a row they’ve played well enough for us to win,” McClamrock said.
Hickory Ridge coach Marty Paxton said the Mustangs’ defense presented unexpected problems.
“They stumped us some in the first half, but football is all about adjustments and we eventually adapted to what they were doing,” Paxton said. “East brought it tonight and they made some tough hits, but our guys did a nice job of holding onto the football. One turnover on a night like this (Goodlett recovered a fumble) is very good.”
East took a serious soaking from the rain at halftime, and then the Mustangs watched Hickory Ridge settle the outcome in the early stages of the second half.
East lost a fumble shortly after the third quarter commenced. Linebacker Carter Edwards made the recovery and Jaylen Rudisell cashed in with a touchdown run for Hickory Ridge.
When East immediately fumbled again, Edwards pounced again. His second recovery set up a scoring run by Remington Peters, and the Ragin’ Bulls led 20-0.
“We gave them two touchdowns with short fields on the fumbles,” McClamrock said. “That was the difference in the game.”
Max Wall was limited to return duties in the first half, but he provided the Mustangs’ offense in the second half. He had runs of 12 and 13 yards and then broke a 15-yard scoring dash that finally put East on the scoreboard with 1:14 remaining.
Statistically, it will not be a memorable night for the Mustangs, but players like Porter, Bennett and Goodlett, who played their lungs out, can tell the story 10 years from now about how they faced a hurricane and fought for 48 minutes.
Rudisell and Waslo combined for 191 rushing yards, and Hickory Ridge stayed in contention in the SPC.
Paxton pulled a crumpled quote out of his pocket after the game. He’d used it to fire up his team before they went out to battle the elements and the Mustangs: “The road to athletic greatness is not marked by perfection, but the ability to constantly overcome adversity and failure.”
“That came in the mail today from N.C. State, and I’d say it came at the right time,” Paxson said. “We faced some serious adversity, but we did a great job of capitalizing on their mistakes.”

CHINA GROVE — West Rowan and Carson engaged in a defensive slugfest for most of the game last night but,... read more