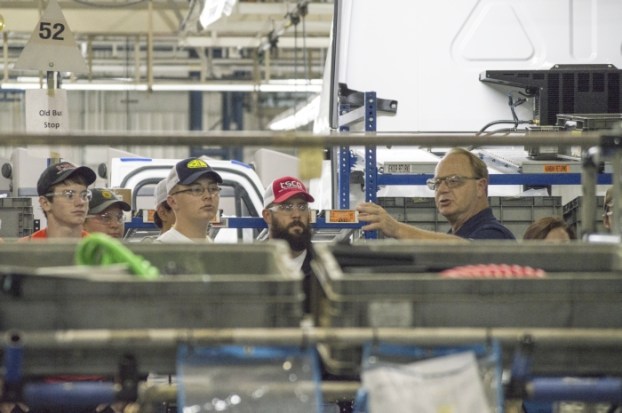 Welcome to the plant Students streamed through the Cleveland plant as part of a guided tour and heard presentations from local companies. National Manufacturing Day wrapped up with speeches from Cleveland Plant Manager Henning Bruns and U.S. Rep. Virginia Foxx, R-5. During speeches and an ensuing news conference, company officials and politicians stressed the importance for America’s youngest generations to consider manufacturing careers.

Cleveland’s event was one of more than 2,300 across America on Friday.

Foxx said that about 5 million jobs in America are vacant. With a lack of qualified workers, many employers aren’t able to fill open spots, she said.

“We’re trying to make it easier for you than it’s been in the past by providing you the opportunity to get the skills,” Foxx told the students.

She stressed students shouldn’t discount the value of a career in manufacturing. Bruns said employees at Freightliner aren’t limited to assembly jobs. With experience, employees can move into supervisory roles.

In a report by the Manufacturing Institute this year, only 37 percent of those surveyed recommended a career path in manufacturing. Respondents with an increased degree of industrial familiarity were twice as likely to recommend a manufacturing career path than those without exposure, according to the report.

Nielsen said the Cleveland plant hires about 20 new employees each week, and finding qualified employees isn’t easy. For every 1,000 applicants, only 150 or so are considered qualified, he said.

“People get a college degree and their employer has no idea what they can do,” Foxx said. “The truth is, they can’t do much.”

The solution is certifications, both at the university level and in community colleges, she said. Certification programs increase relevant job skills and enable employers to more easily find qualified candidates, according to Foxx.

“The needs of the culture are changing more rapidly than, in many cases, the education system has been able to adapt,” Foxx said.

As the culture changes, Freightliner has begun to adapt. For local students who aren’t financially able to attend college, Nielsen said the company could pay for tuition at any college. Employees must work for 90 days with the company before becoming eligeable.

“You don’t have to give up on college just because of your economic position,” Nielsen said.

Attorneys talk professionalism: Is there a Rowan County way?