Despite stormy weather, many turn out for “go bag” scavenger hunt” 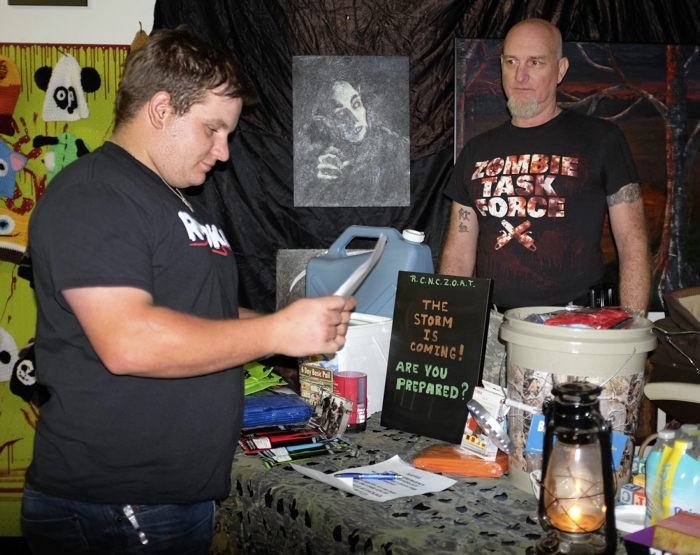 SALISBURY — Survival enthusiasts and fans of “zombie apocalypse” stories might already have a “go bag” full of essentials in case civilization threatens to collapse.

For those who didn’t, Friday’s ReadyRowan Go Bag Scavenger Hunt was a chance to get some of the basics, for free.

“It’s kind of perfect that we have this stormy weather, because the whole theme is emergency preparedness,” said Mollie Ruff, of Downtown Salisbury Inc.

Thirty-three downtown businesses were slated to take part, although some chose to close early due to weather.

The event’s sponsors – businesses, local utilities and Rowan County emergency responders – donated the survival items, including ponchos, compasses, glow sticks, bottled water and other essentials, which shoppers could pick up by visiting the shops and restaurants.

Ruff said these were “legitimate survival items, based on research and recommendations.”

At USA Made Blade, which sells knives and other goods, Scott Whittington gave away the small handheld can openers known to many as “P-38s.”

“Being prepared for bad situations is something I’ve talked to groups about,” Whittington said. “You never know what could make a difference, what little thing could save your life.”

At Dead Ed’s clothing shop, shoppers got free industrial-strength glow sticks and a chance to enter a raffle for other survival gear.

Rob Dalton, who was helping out at the shop, said he’d survived hurricanes in Florida and had seen how quickly supplies disappear in emergencies.

“All these things they’re giving away are beneficial,” Dalton said.

A block away at Growing Pains Family Consignment, manager Christina Gordon handed out maps of North Carolina – a complement to the compasses handed out elsewhere. She said about 150 people had come to her shop for the event.

Gordon said having a map makes sense in an emergency. “Think about it. The GPS isn’t going to work, you’re not going to have your cool little phones,” Gordon said. “You’ll need this, if something really does happen.”

“It’s just good to start that conversation with families with young children,” Ruff said. “If there’s an emergency, if there’s a fire in the house, what do we do?”

Despite the bad weather, many business owners and staff said crowds had been respectable.

“Rain or shine, these stores need business,” Ruff said. “They need people to support them and shop local.”