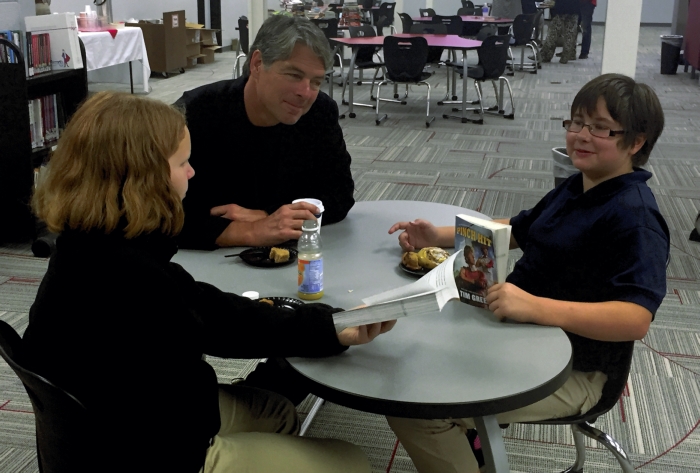 Tim Green sits with Rozalyn Walton (left) and Taylor Deal (right) at the breakfast before Green's talk on literacy on Friday. Walton and Deal's class from China Grove Middle School won the drawing for the free breakfast with the author. Amanda Raymond/Salisbury Post

Tim Green went from tackling football players to tackling kids — with cliffhangers at the end of the chapters of his best-selling sports novels.

He spoke to all of the fifth-graders in the Rowan-Salisbury School System about the importance of literacy and signed books for students.

“I hope that they’ll understand the importance of two things,” Green said regarding the presentation, “education and character.”

Green said he believes reading encourages empathy in children, as well as helping them do better in all of their school subjects.

“They can make themselves better people and better students,” he said.

During his talk to the fifth-graders, Green kept the students engaged and even laughing by modulating his voice and telling funny stories from his life.

He talked about his time in school and in the NFL, while always pushing the importance of education and reading, and read an excerpt from his new book, “Kid Owner.”

“So we started looking for an author that may have a football book, and then this pops up,” she said.

Green played for the Atlanta Falcons for eight years. During that time, he went to law school and published his first book. Green was also a television broadcaster for FOX NFL Sunday and other shows.

Green has visited more than 1,000 schools, according to his website.

Classes also had the opportunity to win a free breakfast with Green. Teachers had to add energizers, any type of physical activity, to their classroom routine, Feimster said.

“It can be as simple as get up, do some jumping jacks for 30 seconds and sit down,” she said.

For every day a teacher did energizers with their class, their name went into a drawing. The schools picked out winners for their individual school, and then the district picked from there.

“Essentially, I would just make them stretch,” Ervin Mabry said about the energizers her class does, “but a lot of our activities when we do lessons, I would try to incorporate movement in those.”

Ervin Mabry said some of the boys in her class had already read some of Green’s books, and for those who had not, she began to read “First Team” to the class.

Student Taylor Deal said she started reading Green’s book “Pinch Hit” on the bus on the way to the breakfast, and she was already on chapter eight.

“He knows how to change off from different perspectives and leaves you with a little bit of a cliffhanger,” she said.

Rozalyn Walton, also a student, said even though the books feature sports, non-sports fans would enjoy them, too.

“The books are very well-written, and some people who really like sports, it’d be awesome for them. And then people who aren’t really into sports, they can start to know more about it,” she said.

The speaking fees from Green’s school visits are used to buy books for kids in underserved communities.

Green said he feels like he is making a difference in children’s lives by writing his books.

“Nothing feels quite like getting kids excited about reading,” he said.