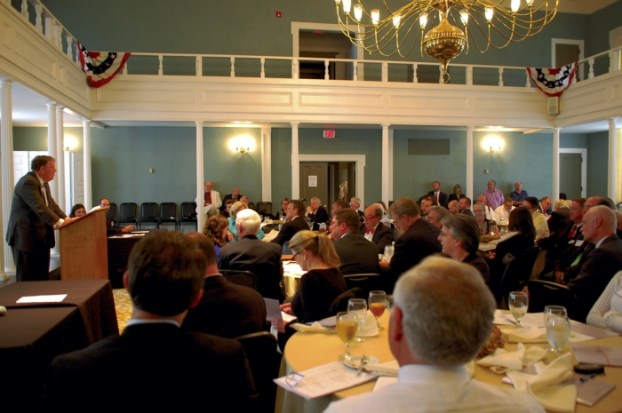 Attorneys talk professionalism: Is there a Rowan County way?

SALISBURY — Retired Superior Court Judge John Holshouser regaled members of the Judicial District 19-C Bar Association Friday afternoon with stories of “fisticuffs” breaking out between opposing attorneys — long-ago days when court was entertainment and lawyers were the actors on stage.

When the 1854 Rowan Museum building still served as the Rowan County Courthouse, Holshouser said in giving the bar members some history, Judge Cloud would send the sheriff across the street to a saloon so he could bring back spirits “for the refreshment of the court.”

Over time, things have dramatically changed, and the Judicial District 19-C Bar spent the afternoon talking about professionalism and how it is practiced today in Rowan County courts.

Salisbury attorney David Post also spoke on the importance of pro bono work and his efforts to establish the nonprofit Center for Access to Justice.

But the day’s special guest was N.C. Supreme Court Chief Justice Mark Martin, who by virtue of his position oversees the Chief Justice’s Commission on Professionalism, which was established in 1998.

The commission is one of 14 in the country, and North Carolina’s was among the first. Martin led off the program reviewing how excellence, integrity, civility and service to others are hallmarks of professionalism in law.

“We are in a sense all public officials,” Martin told the audience of about 100 people, most of whom belong to the local bar, “and it’s critical to conduct ourselves with integrity at all times.”

For attorneys, Martin and others in the program noted, high ethics and standards have to be followed while providing the best defense to their clients and within an adversarial environment — lawyer vs. lawyer. It demands treating one another with honesty, dignity and respect and communicating in absolute candor, Martin said.

The chief justice reminded those in the audience that theirs was a self-regulating profession and that practicing the law is a privilege, not a right. A few cannot be allowed to damage it for all, he added.

“We are the guardians of the rule of law,” Martin said.

“Rowan County is fortunate because we get along most of the time,” Wagoner said. It was an opinion shared by several others in the room.

Assistant District Attorney Barrett Poppler, serving in Rowan County since 2011, said he has practiced in other counties where attorneys can’t even get through the calendar in a professional manner.

“The real good thing about the bar here is that everybody gets along,” Poppler said. “A wildly different atmosphere is not good for anyone.”

He noted how attorneys have to take adversarial positions against one another but at the end of the day, they also must be able to look each other in the eyes, shake hands and say to each other he or she did a good job.

Wagoner also has observed courtroom atmospheres far different than what she sees in Rowan County. In other jurisdictions, she said, “you can cut the tension with a knife.”

Brown credited them with setting the kind of model which he described as following the golden rule and tending to your knitting.

Professionalism in the golden rule terms is being respectful to all and giving your peers every professional courtesy, Brown said. Tending to your knitting is a case of rereading statutes so you’re up with the law and knowing what’s in the file, he said.

Acting professionally doesn’t mean you don’t have passion in representation of a client, several speakers said Friday. But defense attorney Darrin Jordan said the adversarial role with prosecutors has not kept the two sides from being civil.

District Attorney Brandy Cook and her staff have been consistently professional, Jordan said. He acknowledged heading to court in years past “when you’ve said, ‘I don’t want to deal with that DA today.'”

Cook said she thought it was important in maintaining standards of professionalism for attorneys not to get personally involved in their cases. “If you do that,” she said, “you lose perspective.”

When asked what could be improved in Rowan County courts, both Cook and Poppler said communications on both sides of the fence — from the DA’s office and from defense attorneys — could be better.

Cook used the example of defense attorneys filing motions late in the day on a Friday in advance of a case to be heard the following Monday. “It can be frustrating,” she said, especially when the motion could have been filed weeks or months ahead of the court date, when the DA’s office has subpoenaed many witnesses to be present.

Defense attorney Gregory Jones spoke of the importance of seeking out the bar counselor — Jordan serves that role for the local bar — in help with ethical questions.

Jones said he tries to follow the Golden Rule approach. He also believes in not taking things personally and being prepared when he enters the courtroom.

Jones said it’s also important to be respectful and professional with law enforcement and court personnel in general.

Jordan said, “we have a good bar.” He added later, “I think we have a Rowan County lawyer way.”

Post is modeling his Center for Access to Justice after a similar program in Brevard County, Fla. He’s underwriting the costs initially, and he envisions its becoming a clearinghouse matching local attorneys with indigent clients who need legal assistance.

By Post’s calculations, Rowan County has 30,000 citizens who would qualify for legal aid, and if Rowan County attorneys would give 50 hours of pro bono work a year (about an hour a week), it would be the equivalent of having six full-time lawyers for the poor.

Post is hoping to put a board together and find a volunteer administrative assistant. He has bought a green recreational vehicle as a mobile office, and he also hopes in a year’s time that an awards program can be set up to celebrate the local attorneys with the most pro bono hours.

Post said the attorneys together “can make the lives of everyone in Rowan County richer.”

Ketner also encouraged the bar members to do pro bono work and not forget about the Lawyer on the Line program. But Ketner’s biggest plea was for the local bar to establish a BarCARES program for its members.

The short-term, confidential intervention program focuses on improving the mental health of attorneys faced with personal problems. Ketner said he knows of three suicides among local attorneys, and without a BarCARES program, “the risk is just too high and the cost is just too great.”

A mother remembered: ‘People never knew the pain she was in’

SALISBURY — Christie Reavis has her mother’s ashes now. She hopes to place them in an urn garden at a... read more