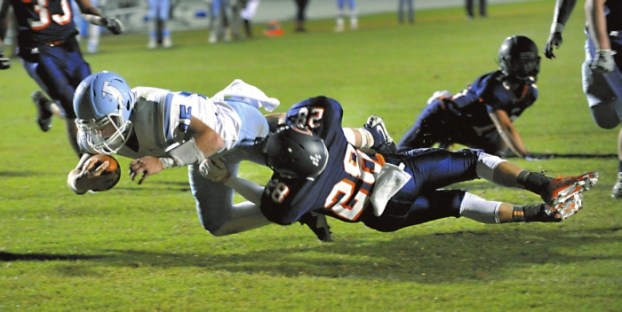 West's Kasey Otto 15 dives into the endzone for a TD with Carson's DJ Fulcher 28 hanging on. photo by Wayne Hinshaw, for the Salisbury Post

CHINA GROVE — West Rowan and Carson engaged in a defensive slugfest for most of the game last night but, as they have done so many times this season, the visiting Falcons used explosive big plays to rack up a win.

None was bigger than an electric 95-yard touchdown pass from Kacey Otto to Juwan Houston late in the first half that propelled the Falcons to a 28-7 South Piedmont Conference win over Carson Thursday night.

The Cougars (3-3, 1-3 SPC) had just trimmed a 14-0 West lead in half with 2:45 left in the first half and seemed to have some momentum for the first time in the game. The Falcons (5-1, 4-0 SPC) found themselves backed up to the five after a pair of penalties on second down. West proceeded to stun the large crowd and the Cougar defense when Otto dropped back in the end zone and hit senior wide receiver Houston in full stride down the left sideline to produce the back-breaking 95-yard scoring play.

Suddenly the momentum had completely shifted again as West took a 21-7 lead into halftime then rode the strength of their defense in the second half to secure the win.

“No, I have never thrown one that long in my career,” Otto said. “and honestly I get goosebumps just talking about it now. That was a key play for sure and he (Houston) made a great play on the ball and he’s got some wheels.”

Falcon head coach Joe Nixon agreed it was a turning point in the game and admitted he had kind of drawn the play up “in the dirt” right before the team pulled it off.

“I have to tip my hat to the players,” he said. “We had great protection. Kacey stood in the pocket and Howard made the big play.” It is uncertain if the long bomb is a school record but none has been more crucial to the outcome. “We have been big playing people all season,” Nixon said. “And, hopefully our guys will keep it up. Our defense was terrific tonight as well.”

Defense was the name of the game for the most part in a contest moved up to Thursday to avoid pending heavy rains this weekend. Five times in the contest the teams were halted on downs after driving deep into enemy territory. The final one by the West defense came late in the fourth period after they had gone ahead 28-7 on a TD pass from Bryant Young to Kam Caldwell.

Carson moved down to the Falcon 20 behind the running of Dylan Livengood but a sack of quarterback Cole Sifford for a 10-yard loss ended the threat and the game.

Sifford, a 5-6 sophomore, was thrown into the fire last night as he came up from the jayvee squad to direct the offense while regular starter Owen White recovers from a concussion. It was Sifford’s first varsity action and he did manage to pass for 68 yards despite being sacked four times by the Falcon defense, including three by Falcon defensive terror Derrick Moreland (6-3, 280)

“It was a lot of fun but it is a whole lot different from JV ball,” Sifford said. “Everything is much faster but it was a good experience for me.”

“Cole played well and did what we needed him to do tonight” Carson coach Joe Pinyan said. “Livengood ran the ball well (101 yards and one TD) and our defense gave us a chance to win. We moved the ball several times tonight but our problem is we just can’t finish. We have to fix that.”

Otto, who played quarterback and halfback in the contest proved the most versatile weapon for the Falcons in the win. He passed for 110 yards, ran for 117 yards and one TD and even caught a 15-yard pass from Young. His 15-yard quarterback draws on fourth down gave the Falcons a 14-0 lead in the second period. The sophomore Young had a strong passing night with a pair of TD strikes, including a 48-yarder to Kortez Weeks to open the scoring on the first play of the second quarter.

Carson will try to find a winning formula next Friday when they host Pinyan’s alma mater, South Rowan. West goes on the road again when they travel to Central Cabarrus next Friday for a key SPC battle.