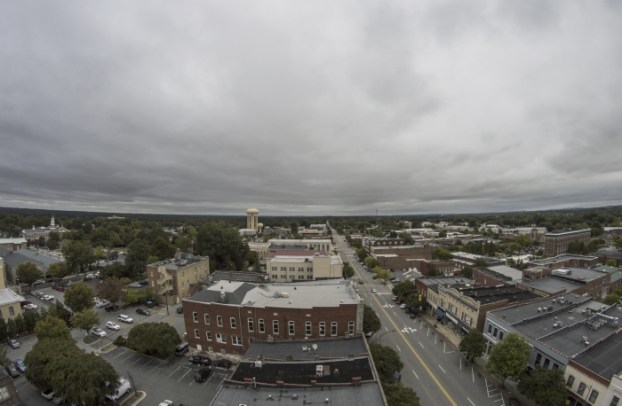 Josh Bergeron / Salisbury Post - Clouds hover over downtown Salisbury on Thursday. Gov. Pat McCrory has declared a state of emergency for all of North Carolina and warned of potential for flooding in advance of weekend storms.

UPDATE 8:30 a.m. The Rowan County Fair has officially closed for the year due to weather.

By Josh Bergeron and Amanda Raymond

With 5 inches or more of projected rainfall, weekend storms could bring localized flooding to parts of the Piedmont and Rowan County, according to local and state officials.

Weekend storms are in addition to any potential rainfall from Hurricane Joaquin, which reached a category four storm on Thursday.

Weather forecasts for Joaquin remain varied and uncertain. In its 3:30 p.m. briefing on Thursday, the National Weather Service estimated Joaquin would remain offshore and not make landfall in North Carolina. Joaquin, however, isn’t the only weather concern. Weather forecasts predict Joaquin will feed moisture into a band of storms over North Carolina.

In preparation for the weather, Gov. Pat McCrory declared a state of emergency on Thursday. McCrory’s declaration will waive hour and weight restrictions for truck drivers — primarily electric crews — responding to the storm, according to a news release.

“We’re hoping for the best, but hope is not preparation nor is it a plan,” Governor McCrory said. “I’ve ordered all state agencies to begin preparation for the severe weather, particularly flooding, that is going hit just about every corner of the state during the next few days.”

Search and rescue teams as well as National Guard soldiers, Highway Patrol troopers and Department of Transportation crews are also preparing for the weather, according to a news release.

Meanwhile, local officials are beginning preparations for the worst.

Thomason said municipalities in Rowan, the Department of Transportation and first responders are aware of the weather conditions.

“Each one of them is making their necessary checks and preparations to make sure that their agencies are able to respond in whatever manner necessary,” Thomason said.

Rain began Thursday and is expected to intensify today, up to five inches in 24 hours.

He said the American Red Cross would open emergency shelters if necessary.

The largest event to be affected by rain is Autumn Jubilee, which draws large crowds of people every year. It’s the first time the event has been canceled in its 36 years. Rowan County Facilities Director Don Bringle said safety and weather concerns were the main reasons for the cancellation. Bringle said the event will not be rescheduled.

Football games were rescheduled to Thursday because of weather projections. Downtown Salisbury’s Zombie Walk was rescheduled to Nov. 7. The finale for “Tickle the Ivories,” the pianos placed downtown for people to play, has been moved to Oct. 9.

The ReadyRowan scavenger hunt scheduled for today will not be affected by weather.

Thomason said Rowan residents should clear out gutters and storm drains, ensuring they are fully functional.

“Even flood waters that do not appear to be swiftly moving is not always the case,” Efird said. “Children shouldn’t be allowed to play in flooded areas.”

Efird said he expects some power outages. If they do occur, Efird said stop lights should be treated as a four-way stop sign.

McCrory has asked citizens to update and replenish emergency kits with bottled water, non-perishable food, a weather radio, copies of important documents, flashlights, batteries and any supplies and medications for pets.

By Sara Drake Rowan Cooperative Extension Tuesday evening was a flurry of activity in the barn at the Rowan County Fairgrounds.... read more