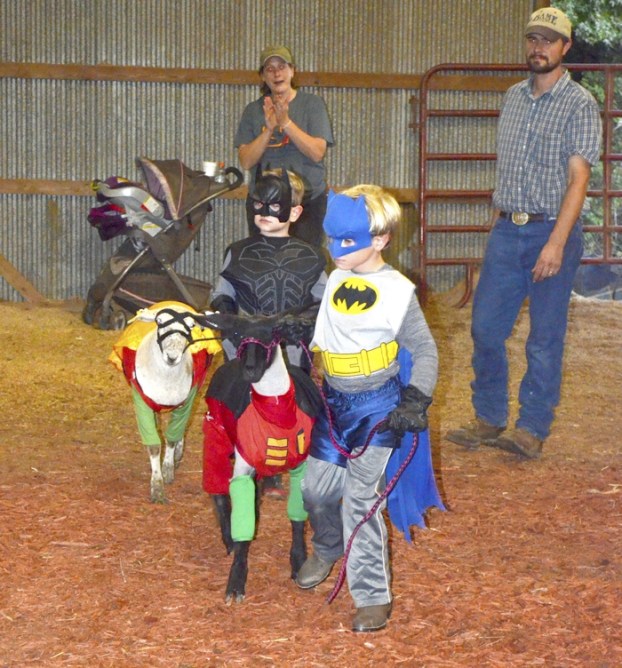 Tuesday evening was a flurry of activity in the barn at the Rowan County Fairgrounds.

All 155 sheep and goat entries arrived and were weighed in. Then the washing, shearing and grooming began to get the animals fit for the show ring.

Some of the lambs made an early appearance in the show ring while they were paraded around in the ever popular Lamb Dress-Up Contest. This year — with 17 entries and more than 20 youth participating — was one of the largest years for the contest.

We had superheroes, firefighters, a pirate, scarecrows and many more. The dress-up contest is judged by audience applause, and it took three cheer-offs to determine the winners. In first place was “Seeing Double – Batman and Robin” with Luke Bame and Guy Deal and their lambs.

Minnie Mouse, who was played by Jamie Welday, and Daisy Duck, Jamie’s lamb, placed second. Rounding out the top three were Audrey Oliphant as Dorothy and her lamb as the Scarecrow.

You won’t want to miss the Dairy Cow Dress-Up on Friday night at 7 p.m.  The livestock shows at the fair wrap up on Saturday with the Dairy Cow show beginning at noon.

Students get homework help and much more at church program

Getting homework help is as easy as walking two blocks from their school for some Granite Quarry students. Granite Quarry... read more