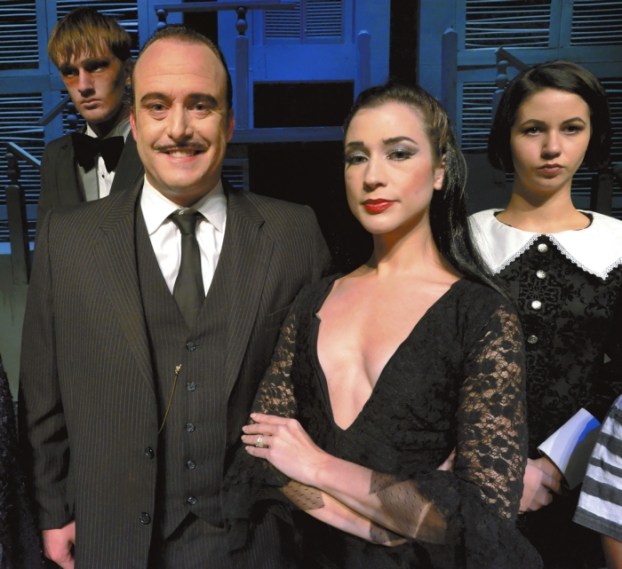 Addams Family: in front Gomez (Josh Wainright) and Morticia (Emily Ramirez); in back are Lurch (Wayland Pressley) and Wednedsay (Emily Olszewski). Photo by Wayne Hinshaw, for the Salisbury Post

The Meroney Theatre becomes creepy and kooky next Thursday

Come meet the family — we’ll leave the lights off for you! Wednesday Addams (Emily Olszewski), the ultimate princess of darkness, has grown up and fallen in love with a sweet, smart young man from a respectable family. A man her parents have never met.

And if that weren’t upsetting enough, she confides in her father and begs him not to tell her mother. Now, Gomez (Josh Wainright) must do something he’s never done before — keep a secret from his beloved wife, Morticia (Emily Ramirez). Everything will change for the whole family on the fateful night they host a dinner for Wednesday’s “normal” boyfriend and his parents.

The Addams Family is a magnificently macabre musical comedy, created by Jersey Boys authors Marshall Brickman and Rick Elice, with music and lyrics by Andrew Lippa. PPT’s production of The Addams Family, which opens at the Meroney Theater next Thursday, is directed by Reid Leonard, with choreography by Tod A. Kubo and musical direction by Jenny Carroll.

The show is based on the iconic characters created by Charles Addams in his single-panel gag cartoons that first appeared in The New Yorker magazine in 1938. Over his nearly 60-year career, Charles Addams maintained his position as one of the most celebrated cartoonists of all time.

75 years later, The Addams Family still thrives as a pop culture phenomenon, with characters appearing in commercials, merchandise, movies, the popular 1960s television show, and a Broadway musical, which featured Nathan Lane as Gomez and was nominated for 2 Tony Awards and 8 Drama Desk Awards including Outstanding Musical.

PPT’s family-friendly production of The Addams Family promises an eye-popping set designed by Reid Leonard, a stellar orchestra conducted by Virgie Taylor, and jaw dropping dance sequences only Tod A. Kubo can deliver.

Come meet the family…We’ll leave the lights off for you!