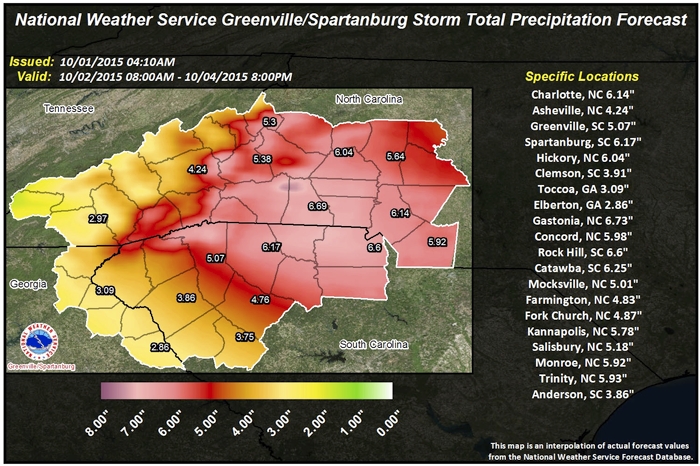 Hyde County on the Outer Banks has issued a mandatory evacuation order. All ferries will change schedules to reflect the evacuation.

From the Associated Press:

The National Hurricane Center in Miami said Thursday afternoon that additional strengthening is expected over the next 24 hours, as the storm moves past the Bahamas, bringing winds, heavy rain, dangerous surf and significant storm surge.

The storm has maximum sustained winds of 130 mph (210 kph) and is moving southwest at 6 mph (9 kph). It is about 70 miles (115 kilometers) south-southeast of San Salvador, Bahamas.

A hurricane watch is in effect for much of the Bahamas and other nearby islands. Forecasters say the center of Joaquin should move over or near portions of the central Bahamas Thursday afternoon and night.

Forecast maps show the storm passing the Bahamas and then making its way toward the U.S. over the next couple of days.

The National Weather Service has issued a flash flood watch for Rowan County and the Piedmont from Friday morning through Sunday evening.

Heavy rain will cover western North Carolina on Friday and continue off and on through the weekend as an upper low remains nearly stationary and hurricane Joaquin moves north near the Carolina coast.

It’s not known exactly what impact the low and the hurricane will have. How the two systems interact will determine how much rain will fall. Several inches of rain appear likely. Periods of very heavy rainfall are expected to produce flash flooding along smaller creeks and streams with significant flash flooding possible, especially in areas that received heavy rain in recent days.

The prolonged period of heavy rain could result in flooding along main stem rivers by early next week. People living near streams should monitor the situation closely over the next 1 to 2 days. Now is the time to decide what you will do if threatened by flood water.

A flash flood watch means that conditions may develop that lead to flash flooding. Flash flooding is a very dangerous situation. You should monitor later forecasts and be prepared to take action should flash flood warnings be issued.

Today, we’ll have a 50 percent chance of showers, mainly in the afternoon, with some fog this morning. The high will be 65, with north northeast wind at 8-11 mph, with gusts as high as 20 mph. A tenth to a quarter inch of rain is possible.

Friday could be the worst day of the next several, with a 90 percent chance of rain, which could be heavy at times. The high will be 58. Winds will blow again from the north northeast at 13-17 mph, with gusts up to 25 mph. A half to three quarters of an inch of rain is expected.

Friday night, expect heavy rain, with a low of 54. Winds from the north northeast are expected to be 18 mph, with gusts up to 26 mph. One to 2 inches of rain is possible.

Sunday’s chance of rain will be 60 percent, with a high near 67. The chance drops to 40 percent Sunday night, with a low of 56.

Monday has a 30 percent chance of showers, with mostly cloudy skies and a high of 69. The low will be 53.

Tuesday will be mostly sunny and 72, with a low of 53 again.

And Wednesday should be sunny, with a high of 73.