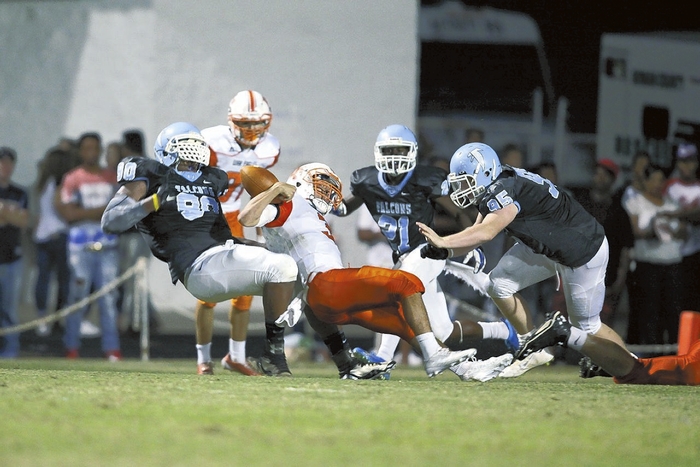 James Sipes/for the Salisbury Post Derrick Moreland (90), left, rips the ball out of Davie County quarterback Chris Reynolds’ possession during a West Rowan win on Aug. 28. Fellow defensive lineman Tyler Wheeler (95) moves in to assist Moreland. The entire West defensive line was selected as one of the two Friday Night Heroes from last week, for its effort in a 28-6 victory over South Rowan.

MOUNT ULLA — Doing the math, West Rowan’s defensive line is 1,070 pounds of trouble for opponents.
The ends are seniors Derrick Moreland (290) and Dearius Phillips (235). The nose guard is senior Justin Evans (270). The 3-technique tackle, lining up on the outside shoulder of a guard, is sophomore Devin Turner (275).
“It’s a good group, and the best thing about them is their experience,” West coach Joe Nixon said. “Three seniors and a sophomore who played on Friday nights as a freshman.”
West Rowan’s Shade 50 defense is familiar and battle-tested. It’s an old-school defense that has stifled spread teams and dismantled triple-option teams — and everything in between. The defensive scheme helped the Falcons win three consecutive 3A state championships not long ago (2008-10).
The Falcons (4-1, 3-0 South Piedmont Conference) are putting up defensive numbers this season that are almost in line with their glory days.
West leads the county in total defense, scoring defense and pass defense and is second to Salisbury in rushing defense. West is second in that category because it allowed Mooresville to rush for 285 yards on opening night. In their last four games, the Falcons have limited teams on the ground.
“We’re just working as hard as we can every day to get better,” Phillips said. “The defensive linemen are close, like brothers. We do everything together. I look up to them.”
West became a consistently good program in 2004, and from 2004-2010, the defense never allowed more than 12.6 points a game. The peak of West’s defensive dominance was in 2010 when it allowed a meager 7.06 points per game — the school record — and shut out six opponents.
Since then, West’s points allowed numbers have drifted in the wrong direction. The Falcons allowed 21.6 points per game when they fell to 6-6 in 2013. Then the 2014 Falcons (8-5) allowed 27.2 points per game, the program’s shakiest defensive numbers since 1998.
But the fear factor may be returning in Mount Ulla. West scored two defensive touchdowns to beat a stout Robinson team, 28-21, and the Falcons held South Rowan to 77 yards in Friday’s 28-6 SPC victory.
Turnovers put South Rowan’s offense in position to build a substantial first-half lead, but West’s defense kept the Raiders out of the end zone. South was inside the West 10-yard line twice in the first half, but settled for field goals.
“Our backs were to the wall most the first half,” Moreland said. “We couldn’t stop them from getting field goals, but we did keep them from getting touchdowns.”
Moreland and Phillips led the charge on West’s first defensive stand of the half.
Sacks by Moreland and Turner stopped South’s second chance at a TD.
South’s Brennan Lambert kicked two field goals to put him team ahead, but it easily could’ve been 14-0, instead of 6-0.
“When South had those chances to score we got 11 hats to the ball,” Moreland said. “That’s what we always talk about doing. Even if you can’t make the tackle, be around the ball, and make something happen.”
West had another stop inside its 10-yard line in the second half, and the Falcons capped the victory with one of their specialties — a defensive touchdown on a fumble recovery by linebacker L.J. Robinson.
The last three weeks, the Falcons have scored three defensive touchdowns. They’ve allowed opposing offenses to score only three TDs in that span.
“Evans and Turner have been very strong on the inside,” Moreland said. “Their work in the weight room made them strong.”
When your defense is scoring as much as the opposing offense, your chances of winning are pretty good, and it’s starting to feel like old times in Mount Ulla.
West’s defensive front four, with backup help from junior Tyler Wheeler (245) and sophomore Craig Mattison (225), is leading the charge. The versatile Moreland, West’s biggest defensive lineman, moves inside at times, so Evans or Turner can get a break.
“We know we’ve got a ways to go,” said Nixon, who is focused on West’s future, not its past. “But we’ll get there. I’m proud of the work these guys are putting in.”