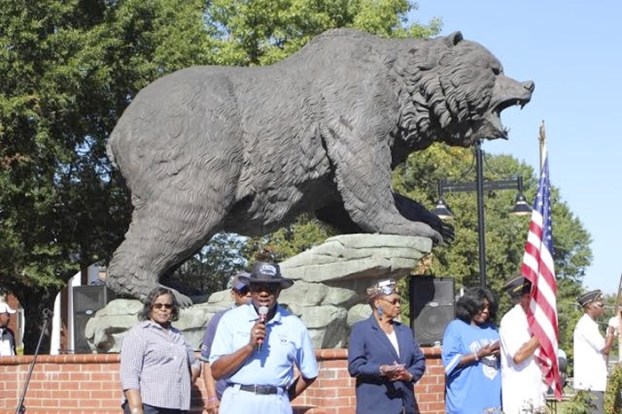 Aaron Willis, center, a high school senior from Durham, visited Livingstone during the West End Classic with his parents. Photo by Gregory Deas

SALISBURY – On Sept. 19, there was a lot of good going on at Livingstone College. An Open House was held for high school students, and the institution hosted the Second Annual West End Classic.

The West End Classic is a football contest so named because it represents a collaboration between Livingstone, the city of Salisbury and members of West End Pride and West End Community Organization. Livingstone played Central International University in this year’s event and thrashed the Cardinals 40-0 inside Alumni Memorial Stadium. Salisbury City Manager Lane Bailey and City Councilwoman Karen Alexander watched the game as guests of Livingstone President Dr. Jimmy R. Jenkins, Sr.

Although the football game kicked off at 1 p.m., the day got started at 10 with a West End Classic parade, which was led by Jenkins and his wife, Dr. Faleese Moore Jenkins.

“This year’s West End Classic was very successful, due in large part to the camaraderie that continues to grow between Livingstone, the city of Salisbury and members of the West End Community,” Jenkins said. “I was pleased with the turnout we had for the parade, and I was certainly pleased with the outcome of the football game. On the academic side, which is of course the most important aspect of everything we do at Livingstone, I thought the Open House was a great way to complement the day’s events.”

The Open House was organized by Tony Baldwin, associate vice president for the operations of student affairs/enrollment management, and included high school students from the Carolinas and Virginia.

“I thought the Open House was a success, and I think it will go a long way toward contributing to our fall 2016 enrollment,” Baldwin said. “The students who visited Livingstone on Sept. 19 were exposed to all facets of college life. They got a chance to talk to some of our professors, they met with Student Government Association representatives, they talked to some of our students who are in fraternities and sororities, they had the opportunity to meet with officials in our Career Services Department and they were treated to the football game. It was a well-rounded day for them.”

Aaron Willis, a senior at Kestrel Heights High School in Durham, was among the students at the Open House. He said one of his high school guidance counselors suggested he consider attending Livingstone because of its enrollment.

“This seems like a pretty nice campus, and the people are really friendly,” Aaron said as a celebration was held at the bear plaza on Livingstone’s front lawn. “I’m excited about going to college, and I’m really interested in majoring in something that has to do with technology. People always say your college years are your best years … and I know the more education you have, the higher chance you’ll have of getting a good job.”

Aaron attended the Open House with his parents, Cassandra and Avery Willis. His mother learned about the Open House through communications with Katrina Jarrett, associate director for the Office of Admissions.

“I told Aaron that attending this Open House was his opportunity to begin experiencing a new journey,” Cassandra Willis said. “My husband and I have encouraged him throughout the years not to get into trouble or to hang with the wrong crowd. We just want the best for him. His dream is to become an NFL player, but we’ve told him no matter what he does in life he needs to get a solid education, and we’ve taught him to always be respectful of his teachers and other adults.”

Aaron’s father didn’t attend college but has always stressed the importance of education to him.  His mother has a bachelor’s degree in social work from UNC Wilmington and a master’s degree in health administration from Central Michigan University.

Aaron didn’t commit to attending Livingstone when he visited on Sept. 19, but he said chances are good he’ll become a Blue Bear.

That’s good news to Baldwin and to Jenkins, who were excited about the day’s events – from start to finish.

“This is a beautiful day, isn’t it?” Jenkins said to commence the on-campus celebration after the parade. “We want to make some noise because this is a demonstration and a symbolization that the West Side is the place to be, and we welcome the students who are here for the Open House.”

“This is a crucial year as we look at what’s been going on in the state,” Wright said. “This institution has been here for more than 135 years, and I’m very proud of it. I’m not a Livingstonian, but I bleed blue.”

Almeader Holt, secretary of West End Pride, also spoke to the crowd. In an interview, she said she’s proud of the West End Classic but wants to see more interaction between Livingstone students and young people in the community – and with Livingstone’s alumni associations.

“You have to keep working at it until you get it like you want it,” Holt said. “Last year was the first year, and this year’s event was a little better. We enjoy the collaboration with Dr. Jenkins and Dr. Alexander, which is exciting because it hasn’t always been that way.”

“I’ve lived in Salisbury all my life, and the campus is the heart of the West End community,” Howard said. “But now that Livingstone is collaborating with the people in the neighborhood, we feel more connected to it and more a part of it.”

Hood Theological Seminary will present its annual Ruben L. Speaks Memorial Lecture Series on Oct. 2 and 3 on the... read more