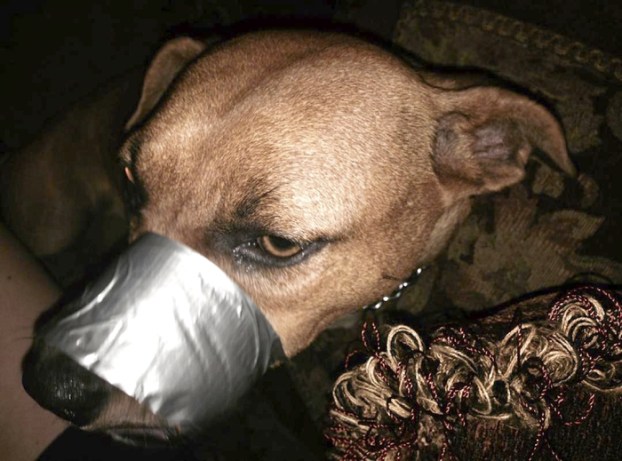 Submitted photo A woman taped her dog's mouth shut because it was barking, then posted the photo on Facebook, earning an animal cruelty charge. Things got a little hairy for a Salisbury woman when what she insists was a harmless prank turned into a rough day.

Like many people, Kimberly Ann Howell, 25, of Long Ferry Road, posted photos of the family dog to her Facebook page. The difference? The photos featured the short-hair’s snout, which had been muzzled with bands of duct tape.

According to the report, the photos were taken down almost immediately as biting comments began flowing in, but an anonymous tip-off to the Department of Social Services stated Howell captioned the photos saying the dog was barking all night, so she closed its mouth.

The case was initially reported to DSS because a small child was present in one of the pictures, but DSS referred the case to the Rowan County Sheriff’s Office, where it was investigated by Detective Ryan Barkley. When Barkley arrived at Howell’s residence, he was met by her boyfriend, who asked, “Is this about the dog?”

The boyfriend said Howell thought “it would be funny” to tape the dog’s mouth and post the photos Monday, and that she “didn’t think it was anything serious.” According to the report, over the past several days, Howell has faced severe harassment online from acquaintances.

According to the Sheriff’s Office report, Howell claims the action was not cruel because the duct tape did not harm the pet. She has since posted photos of the dog in good condition to Facebook.

Barkley examined the dog, a young female mixed breed, and found her to be in good health with no other signs of abuse or neglect. Photos of the incident were still on Howell’s phone. Howell was charged with cruelty to animals. She has been placed under a $2,000 secured bond.

Howell was also served an outstanding order for arrest for failure to appear at a court case for two older traffic charges.  Howell was given a $1000 bond for that charge. Her court date will be Nov. 4.

Barkley consulted with Animal Control about the disposition of the dog involved in this incident. Since there were no apparent injuries or signs of neglect or mistreatment, the dog was left in the custody of Howell, but she was told that a follow-up visit could take place at any time to check on the condition of the dog.