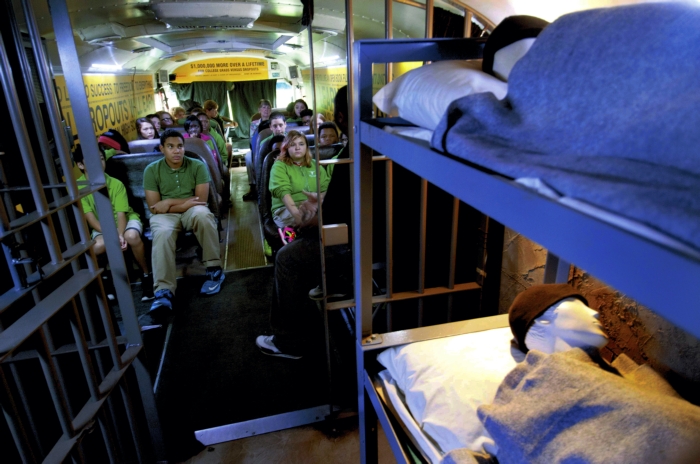 Eighth-graders at North Rowan Middle School got to tour the Alabama-based Mattie C. Stewart Foundation Choice Bus. The converted school bus is one of several that travel to schools all over the country to encourage students to stay in school. The display includes a video which uses the lives of prison inmates as motivation to make choices that will better students’ lives as opposed to running the risk of ending up in a situation where they would make few choices — in prison. The back of the bus holds a replica prison cell, where students get a glimpse into the day-to-day lives of inmates. Jon C. Lakey/Salisbury Post

SPENCER — It’s not every day that students can move from a classroom to a prison cell in a matter of five steps.

Students at North Rowan Middle School saw where bad choices could lead them on the Choice Bus on Wednesday.

The Choice Bus is a learning tool used by the Mattie C. Stewart Foundation to reduce school dropout rates.

Christopher Rice, a presenter for the program, said the bus helps schools encourage their students to graduate.

“We’re an aid for schools – a tool for them to use to help improve graduation rates. And that’s nationwide,” he said.

The bus has travelled to 21 states and has visited more than 2 million students, according to a press release.

“We want to help one kid at one school at one time all over the country,” Rice said.

Camille Mackey, an employee of Communities in Schools, has brought the Choice Bus to North Rowan Middle last year and this year.

Mackey said a lot of the students were excited to experience the Choice Bus.

“They’re excited to see it just to see because they’ve never seen what a jail cell actually looks like,” she said.

Half of the school bus was a classroom with a television screen and speakers set up for a four-minute video. The video, titled “The Choice is Yours,” discussed the reasons why students should stay in school and featured interviews from inmates who did not finish high school.

The video also told students that they could make more money over their lifetime if they stay in school.

Presenters also gave the students information about why education is important for following their dreams and making money in the future.

The other half of the bus is set up to look like a prison cell.

Rice told the students that everything from the prison cell was from real prisons and had the same dimensions.

Anthony Williams, another presenter, said they chose to make half of the bus a prison cell because of the connection among education, choices and prison.

“Our founder, Dr. Stewart, his concept was that there was no difference between the people on the school bus and the jail bus except for the mindset,” Williams said.

The eighth-grade students were able to explore inside the cell and see what a real-life prison cell looked like.

“We’re not here to say that everybody who drops out of high school is going to prison,” Rice said. “But it is a reality that 75 percent of high school dropouts do end up in prison.”

The students also signed a poster that the school could display with the words “The Choice is Mine” on it, on which they pledged to do things like follow their dreams and attend class.

Williams said he hopes the students will use education to achieve their dreams.

“I encourage every kid to follow their dreams and use education as a ticket to whatever they want to do,” Williams said.

The next stop for the bus is at Crest Middle School in Shelby.