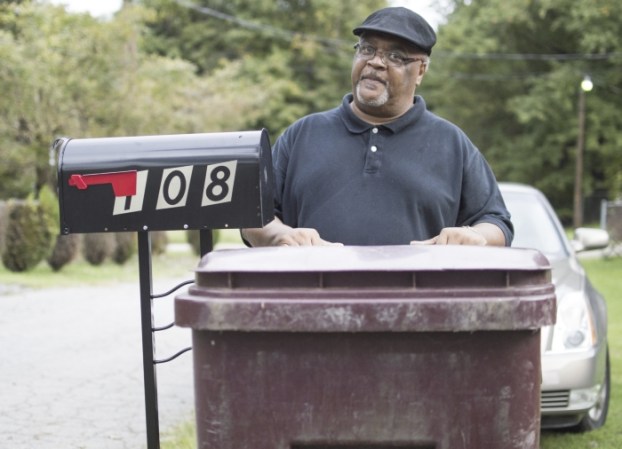 William Thompson stands behind a trashcan at his former residence in East Spencer, where the town overcharged him more than $2,000 in garbage bills. Thompson now lives in Salisbury, but still owns the East Spencer house. Josh Bergeron / Salisbury Post

For more than five years — a total of 63 months — the Town of East Spencer charged Thompson, a former town resident, for three garbage cans. Instead of paying about $16 a month for a single garbage can, Thompson was charged nearly $49 per month. In an email to the town of East Spencer, Senior Management Analyst for the city of Salisbury Mark Drye said Thompson was erroneously charged a total of $2,057.58.

“Not sure exactly how you want to proceed, but we definitely need to do some sort of credit for the customer,” Drye wrote in his email.

East Spencer has paid Thompson back about half of his money, but is refusing to fully refund him. Thompson said he was told by town staff that he should have noticed the mistake sooner. Town staff told the Salisbury Post Thompson received the maximum amount that could be refunded.

Born in Salisbury, he moved to East Spencer 21 years ago. Calling the water rates expensive, Thompson said he’s always been sure to pay his bill for water, sewer and garbage — grouped together on billing statements — on time.

Thompson said the bills seemed high, but always thought it was a problem with his water lines.

“I’ve always complained, but we’ve never been able to figure out what was going on,” he said. “I’ve had water studies done. I’ve climbed up under my house to see if I had any leaks.”

Then, in November 2014, he moved to a house in Salisbury and the cause of his routinely high bills slowly became clear. He still owns the East Spencer house.

When he received his bill for December, the bill again seemed high. This time it was too high, Thompson said. He hadn’t lived in the house during the month of December.

“I had left the water on because it was winter and I didn’t want the pipes to freeze,” Thompson said. “There wasn’t any real, actual water usage. But, it was pretty high. It was almost $50. ”

First, he checked with the city of Salisbury, which handles billing for East Spencer. Thompson recalled being told “that’s just East Spencer’s fee.” Next, he went to East Spencer and says he was told by a town employee that the town’s ordinances required a payment of nearly $49 per month for garbage services.

Thompson asked to see an exact copy of the ordinance, but he hasn’t yet received it.

In April, a receptionist finally revealed the reason for Thompson’s high bill.

“One of the receptionists at Salisbury water asked, ‘Mr. Thompson, what kind of business do you have?” Thompson recalled.

Thompson didn’t have a business.

“Well, why do you need three trash receptacles?” Thompson recalled the woman asking.

City of Salisbury staff told Thompson to return to East Spencer with a single question — what is the price for one trash can?

Again, he went back to East Spencer. Again, he was told a single trash can was $49 per month, he says. Again, Thompson was told East Spencer would produce an ordinance showing the exact cost of one garbage can.

Thompson estimates he’s been to East Spencer’s town hall 25 times in 2015 related to his garbage can bill.

“I was going at least three times per week to try and get some results,” he said.

East Spencer, in fact, charges $16.33 per trash can per month. On the back page of its regular newsletter, the town now lists prices for its solid waste fee. In the August newsletter, waste prices were included for the first time. East Spencer Mayor Barbara Mallet said waste prices are included to allow residents to check for extra charges on monthly bills.

In a meeting with Thompson, East Spencer Planning Director F.E. Isenhour attributed the high monthly costs to being far behind on his water bill.

“That’s impossible, unless we’ve got a mix-up of names or something,” Thompson said.

Following Thompson’s meeting with Isenhour, the town of East Spencer discovered the exact magnitude of cost overages. Since May 2010, the town had billed Thompson for three trash cans. The town owed Thompson more than $2,000, according to the city of Salisbury.

“It’s just been a lot of back and forth to the point where they said, at one point, ‘We’re not giving you anything,’ ” Thompson recalled.

Thompson said his conversations with top town administration have involved Macon Sammons, the former town administrator who now oversees grants and special projects, and all town board members. Sammons could not be reached for comment.

Thompson wants his full $2,057.58 refunded, but he also questions whether other East Spencer residents are being overcharged.

Mallet said the town annually conducts an audit of its waste services. A town board member is assigned to count the number of garbage cans on the streets and compare it with the town’s numbers, Mallet said.

No one representing East Spencer has been able to provide a copy of the annual audit. Town Clerk Anneissa Hyde said she has “never heard of anything like that in my whole life.” Mallet directed questions to Sammons. Jaynes said he would work to gather all of the information relating to the audit, but wasn’t sure if a hard copy of the audit exists.

If others have been overcharged, Mallet said they should let the town know.

“We want to do right by everybody,” she said.

Dick’s Sporting Goods will open its Salisbury Store on Friday, Oct. 9, at the Shoppes at Summit Park. The three-day... read more