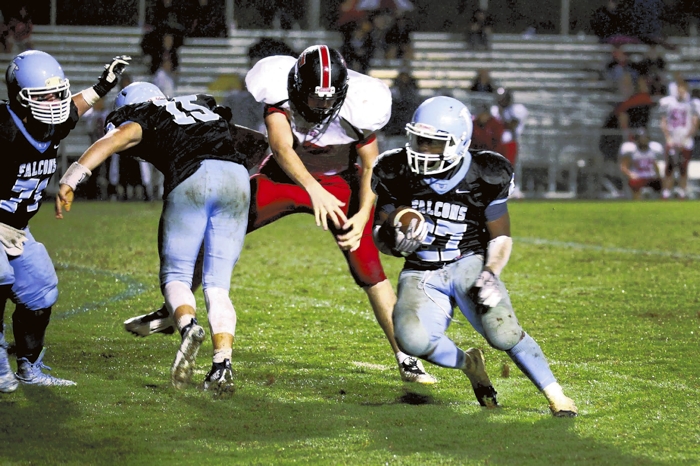 James Sipes/for the Salisbury Post... West Rowan quarterback Kacey Otto (15) throws a block against South Rowan, allowing running back Martavio Rankin (27) an opening on the outside. Rankin rushed for 105 yards in the win over the Raiders.

It used to be a big deal when a Rowan County football player scored 100 points in a season.
At least it was until Wade Moore raised the bar considerably by scoring an unheard of 199 points for West Rowan in 14 games in 2005.
Then K.P. Parks came along at West and showed it was possible to score 100 points in a single month with the perfect storm of a great back and an outstanding supporting cast.
Parks’ 356-point season in 16 games in 2010 likely will stand as the Rowan County record for eternity.
But 2015 has seen a return to a 1960-ish sort of scoring environment in the county. Points have been difficult to come by, even though East Rowan’s Keith Tillman did have a four-TD game against Salisbury.
Six weeks into this season (four Rowan teams have played five games, while North and Salisbury have played six), no Rowan player has scored more than five TDs.
It’s a seven-man tie with five — East’s Tillman, Max Wall and Naquis Caldwell, West’s Jovon Quarles and Kortez Weeks, Carson’s Austin Lear and North’s Xavier Haley.
So can anyone reach the old standard of 100 points?
It’s still possible, but that would mean 17 touchdowns or maybe 16 TDs, plus a few 2-point conversions.
If South Rowan scored more TDs, it’s a year when a kicker could actually lead the county in scoring, but Brennan Lambert has only six PATs to go with his six field goals.

Salisbury
In a 31-6 win against Surry Central, Antwond Glenn rushed for 155 yards on 20 carries, while Willie Clark picked up 67 yards on just four carries.
It was Salisbury’s first effective running game since it beat South Rowan opening night.
“With field conditions the way they were, we made a decision to put our quarterback under center and run the ball,” Salisbury coach Ryan Crowder said. “It doesn’t mean we’re abandoning what we’ve been doing, but we needed to keep things simple. Our offensive line blocked well and Glenn ran hard. He was sticking it in there for 4 yards on ever play and then he was dragging tackles for another 3 yards. If there was a hole he took it, and if there wasn’t, he did a good job of bouncing outside.”
It helped the Hornets that Surry Central was taken by surprise. Salisbury (2-4) had been using a spread offense out of the shotgun in all the film Surry Central had seen.
•••
It was a confidence-boosting win for the Hornets.
“Seeing our offense making first downs and touchdowns really helped out our defense,” Crowder said. “It changed the attitude of the team.”
•••
Safety Darius Jackson had another good game for the Hornets.
Salisbury forced six turnovers and has 23 this season, including 16 fumble recoveries.
“Hornet” Jaylen McDowell picked off his third pass of the season against Surry Central.
•••
Shaquez Strickland, a cornerback, is tied with Glenn for the team lead with three touchdowns. Strickland sped to second punt-return TD of the season against Surry Central. He’s also scored on a fumble return.
•••
The Hornets are off this week. The timing is good, with weather creating havoc and schedule changes.

West Rowan
Because of weather concerns, West Rowan is scheduled to play at Carson tonight, instead of Friday.
West has won eight of nine meetings, with the Cougars breaking through with a 28-21 win in 2013.
•••
Cornerback J.T. Sanders produced two of the biggest plays in Friday’s 28-6 win against South Rowan with an interception and a 71-kickoff return.
South’s Lambert usually kicks off into the end zone, but it was a wet night. Sanders fielded a kickoff at his 3-yard line and returned it to the South 26.
•••
Kortez Weeks had a 42-yard punt return for the Falcons and caught his fourth touchdown pass.
•••
Coach Joe Nixon lauded the play of cornerback Deyquan Byrd against South.
•••
Jovon Quarles suffered an ankle sprain of uncertain severity against South. That was a blow, but sophomore Martavio Rankin responded to an increased workload with a career-best 105 rushing yards.

North Rowan
North Rowan (1-5) lost 35-17 at West Stokes on Thursday but turned in a solid defensive effort.
The Cavaliers allowed 90 rushing yards and 40 passing yards.
•••
Zion DeBose produced his fourth forced fumble of the season. Victor Lyles made the recovery.
•••
Jacob Young kicked his second field goal of the season against West Stokes. He booted one last season as a freshman.
•••
West Stokes shut out North’s leading receivers Desmond Gray and Alonzo Sirleaf, but Trey Stoner had the first TD catch of his career on a pass by Josh Ellis.
•••
Sophomore Xavier Haley pounded out 86 rushing yards for the Cavaliers and went over 500 for the season.

East Rowan
The news at East Rowan during a bye week was in the form of college offers.
Offensive lineman Sawyer Kimmer (6-4, 280) and receiver Caldwell (40 catches, 395 yards, five TDs) received offers from D-II Limestone, which may become a SAC member down the road.
Caldwell had 36 catches for 502 yards and eight scores as a junior.

South Rowan
Marshall Long averaged 56 yards per punt in a 28-6 loss to West Rowan, despite adverse weather conditions.
•••
Coach Daniel Yow praised the play of linebacker Brian Cagler, who turned in a courageous game against the Falcons. He kept battling despite hurting a knee in the second quarter,

Carson
Carson lost 28-6 on Thursday to Robinson.
“They’re good, but I really don’t think they’re three touchdowns better than us,” Carson coach Joe Pinyan said. “We had a 15-play drive and we didn’t get any points out of it, and we didn’t finish a good drive on our first possession. We just made too many mistakes.”
•••
Carson played a jayvee game on Monday and lost to Robinson 24-0. A.J. Banks and Jay Wilkerson ran the ball well for the Cougars.
David Griffin had an interception. Justin Thomason recovered a fumble.
•••
Carson’s varsity is hosting West Rowan tonight at 7:30, with the game moved up a day due to weather concerns.
Carson (3-2, 1-2 SPC) will be playing with a chance to claim its first-ever county championship. The Cougars have beaten Salisbury, North Rowan and East Rowan.
Carson plays everyone in the county and hosts South Rowan on Oct. 9.

Davie
•••
Davie’s CPC game at Reagan has been moved up tonight at 7 p.m. because of weather concerns.
•••
Davie sports historian Brian Pitts informed the Post of two amazing stats from Davie’s 55-14 romp against R.J. Reynolds on Friday.
Davie didn’t have to punt for the first time in seven years, a span of 88 games. The last time it happened was in a 51-6 win against Berry in 2008.
Davie rushed for 370 yards against R.J. Reynolds, the most by the War Eagles since a 2004 playoff win against Purnell Swett when Cooter Arnold and Justin Brown were doing serious damage.
•••
Davie punter/kicker Jonn Young, a West Virginia commit, has been out with a hip flexor, which helps explain why the War Eagles have been going for 2-point conversions frequently.