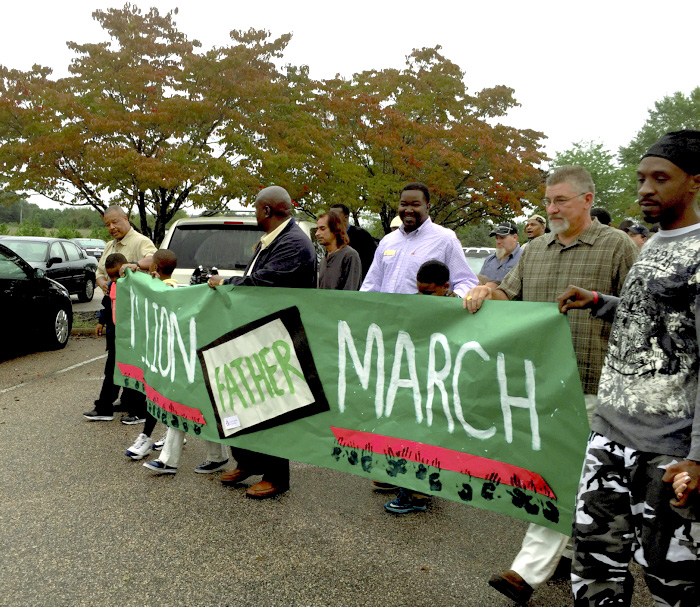 Fathers and father figures came together for the Million Father March at Isenberg Elementary School on Tuesday. Amanda Raymond/Salisbury Post

Local fathers and father figures united Tuesday to march in support of their children’s education.

Fathers, uncles, grandfathers, coaches and other males of the community attended the event.

The men gathered at the school and walked from the bus port around to the front entrance of the school, carrying a green banner painted with the words “Million Father March.”

The website states that The Black Star Project is a nonprofit organization focused on giving disadvantaged African American and Hispanic communities educational services.

“A group of educators and a group of fathers decided that at some point, we as men need to get together and stand up for our kids in school,” Principal Marvin Moore said to the crowd.

Moore also said the men of the community need to take charge of what is occurring in the schools.

The men enjoyed a free breakfast and visited their children’s morning meetings, where students are taught social skills. Teachers were given writing prompts to give to their students to help them write letters to their fathers.

“Some of the prompts were, ‘When I become a father I will …’ or ‘My father’s the best person in the world because …’ Anything to elaborate on that or how they feel,” Krystal Stukes, student support specialist for Community in Schools, said.

Other students created crafts to give to their fathers, like medallions.

According to its website, Communities in Schools is the nation’s largest dropout prevention organization. It provides supportive resources and community-based interventions to students.

Stukes said events like this even help the children who do not have a father or father figure in their lives.

“We’ve got some kids that don’t have fathers … so they put on paper what their feelings were about their fathers, and hopefully the dads coming in can give them an alternate view of what a dad is,” she said.

The men were encouraged to sign up for volunteer opportunities throughout the school year.

“It’s important for a father to be involved in a child’s life,” he said.

Moore encouraged the men to get more involved with their children’s education to show them that school is important.

“Believe it or not, what you tell a kid is strong, but a lot of times what you show them is what they’ll do. And that’s the power in it. You have to show them that school matters,” he said.

Stukes said there will be additional Million Father events throughout the school year, and Moore said he hopes to make the event an annual one.

Moore said he was glad to see men supporting their children.

“I really fought back the tears,” he said. “I love to see men stand together for something.”

Rain and rail line construction make a mess for…