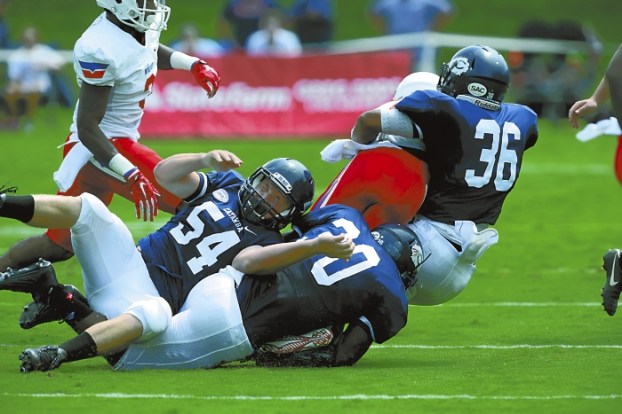 Wayne Hinshaw/for the Salisbury Post ... Catawba long snapper Steven Bartlett (54) helps out on a tackle during the season opener on Sept. 5 against West Georgia. Ed Robinson (30) and R.J. Beaty (36) bring down the punt returner.

SALISBURY — Catawba junior long snapper Steven Bartlett carries a 3.42 GPA in his physical education studies and is well on his way to achieving his career goals of football coach, teacher, and eventually — principal.
Not everyone aspires to be a school principal, and Bartlett was in that camp not long ago.
“There was a time when I couldn’t wait to get out of school and I figured I’d never go back to school again except maybe to see a football game,” Bartlett said. “But I got good advice when I was a senior in high school from my sociology teacher. She told me I worked well with people and I should consider a future in the education business. At first, I didn’t take that advice too seriously, but now I can see it’s what I need to do. I enjoy people and I’d like to shape young people in the right direction.”
Bartlett is a normal-sized guy at 6 feet, 205 pounds, and about 2 pounds of that weight is curly hair.
He graduated from Gastonia’s Forestview High where he was a 48-minute player. He was a linebacker and offensive lineman as well as the long snapper for the Jaguars.
Forestview is a relatively new 3A school, opening in 1998 on the southern end of Gastonia. Besides the traditional Gastonia schools — Hunter Huss and Ashbrook — Forestview’s rivals include Belmont South Point, which is only about three miles away.
“We had some tough high school games, and I played just about every minute on offense, defense and special teams,” Bartlett said.
Former Catawba coach Chris Collins recruited Bartlett. He joined the Indians in 2013 with hopes of competing for playing time at linebacker, but he settled into the specialized role of long snapper as a true freshman. The 20-year-old is now in his third year as the Indians’ long snapper.
“We didn’t have a long snapper on the team when I got here,” Catawba coach Curtis Walker said. “We could see Steven had the ability to snap and his times were very good. He’s been selfless about it. We realize he’d like to play more, but he’s accepted his role and he’s been good at it.”
Bartlett said he’s been a long snapper a long time.
“Way back in Pop Warner football, we needed a long snapper and my dad asked me to try it,” Bartlett said. “I’ve been doing it ever since.”
It’s a specialized occupation that’s given Bartlett an opportunity to compete in Division II football, and he was Catawba’s special teams player of the week in Saturday’s 17-0 loss to Wingate.
In miserable conditions, Bartlett had good snaps on 10 punts.
“On a rainy day, you’ve just got to be even more focused than usual,” Bartlett said. “You’ve got to have a common goal and keep a clear mind. My job was to get the ball to the punter or the holder without any incidents, and that’s all I was thinking about.”
Bartlett also made a solid snap on Catawba’s field-goal attempt, but the damp ball slipped off quarterback/holder Mike Sheehan’s hands.
“Mike told me it was the most perfect snap I’d ever made,” Bartlett said. “It just surprised him that it got back there so quickly.”
Sheehan picked up the ball and heaved a desperate pass, but Catawba missed a scoring chance on a day when it missed all of its opportunities.
Bartlett calls the surprise win at Carson-Newman when he was a freshman the best moment of his college career, but he could have a few snaps that lead to game-winning kicks before he’s through.
Bartlett still has the desire to hit people — he had four tackles as a freshman on punt coverage — but he rarely makes tackles in Catawba’s current philosophy of punt coverage.
“Sometimes I’m the first one down the field on a punt,” Bartlett said. “But my job isn’t to make the tackle, it’s to force the return man to commit to going either left or right.”
While Bartlett hopes to be handing out instructions after he gets his degree, so far he’s proved adept at accepting them.
“The decision to come to Catawba is one I haven’t regretted,” Bartlett said. “I’ve enjoyed the experience on the field and in the classroom, and I’m a better person and better student than when I came here.”