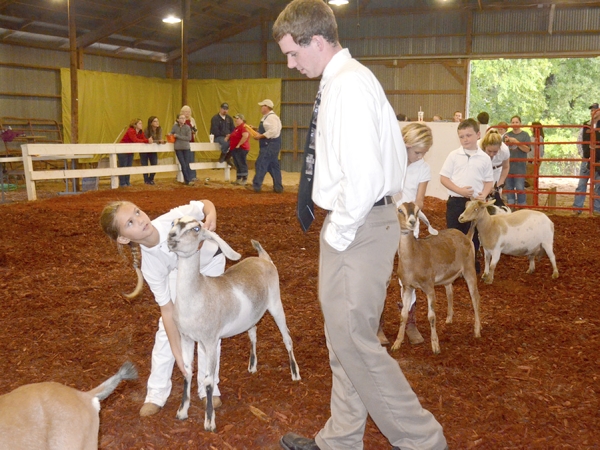 Cooperative Extension Mia Claire Baysinger works to set up her goat, while the judge, Jackson Noble, asks her questions about her goat during peewee showmanship.

This is the fourth year that the Rowan County Fair has hosted an American Dairy Goat Association (ADGA) sanctioned Dairy Goat show. With over 160 entries, the showmanship contest was held on Friday evening, with the show on Saturday.

Jackson Noble from J&M Hideaway Farm has been raising Nubian dairy goats and showing them since 2011. His passion for helping others learn about the dairy industry has inspired him to one day become a sanctioned dairy goat judge.

To become a judge, one must attend a week-long training camp.  During this week, you must judge multiple classes and breeds of dairy goats that have been pre-placed. You must also give written and oral reasons and take a test. Once you have successfully completed this process, you can apprentice judge, which means that you can judge shows with less than 200 entries. Judges must be recertified every two years.

Saturday began with the Junior Dairy Goat Show, followed by the Senior Dairy Goat Show, and then the Dairy Goat Dress-up. Both shows were divided by breed. There are eight different dairy goat breeds — Alpine, LaMancha, Nigerian Dwarf, Nubian, Oberhasli, Saanen, Sable and Toggenburg. Six of the eight breeds were represented at the show.

A recorded grade is also recognized. A dairy goat showing in this category is any goat with only one registered parent or a goat with parents who are both registered, but are of different breeds. Based on numbers at the national level, the most popular breeds are Nigerian Dwarf and Nubian.

After the show, Owen commented that the Rowan County Dairy Goat Show was a “lovely show, with a great group of exhibitors and animals. This is what you want a county fair to be.”

The Dairy Goat Dress-Up had seven entries and was judged by audience applause. Grayce and Kaitlin Moore’s theme of “Save the Udders” in honor of their grandmom and nanny placed first, followed by the Goat Minions of J&M Hideaway Farm in second, and Laney and Lucy Moore with their Lil’ Mountain Monsters in third.