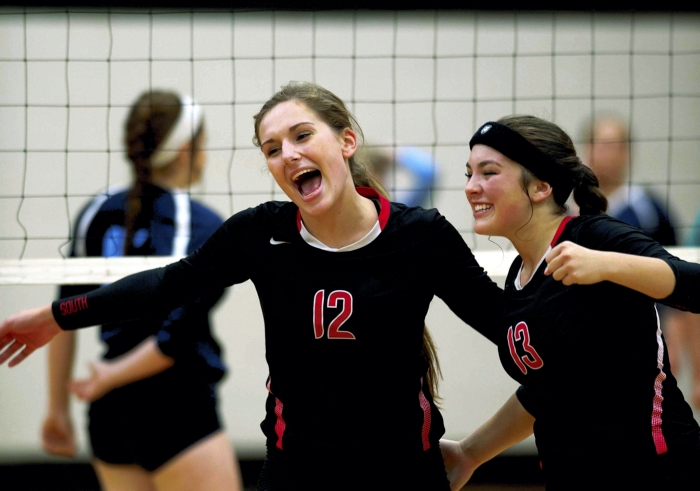 LANDIS — South Rowan’s emotional volleyball series with West Rowan ended with a split.
South won 21-25, 25-16, 27-25 and 25-12 on its home floor on Tuesday and avenged a four-set loss in Mount Ulla on Sept. 1.
“When we’re good, we’re good,” South setter Kylie Labbe said with a smile.
Jan Dowling coached South’s program many years before taking charge of West Rowan’s program prior to this season. The series always been a good rivalry, but Dowling’s job change (she’s a West graduate) raised the level of intensity and emotion.
“When we played them at West, just hearing her voice and knowing she was coaching the other team got in our heads some and I believe that killed us,” Labbe said. “But we played happy today. It was a very good day.”
South Rowan’s new head coach is Pfeiffer graduate Jenna Horne. She was pleased with her team’s comeback from a shaky start.
“We didn’t really change anything, we just stuck with it today and started playing together better,” Horne said. “This was big for our girls. They’ve been thinking about West since we lost to them.”
The hitting of Hannah Moseley and Mady Myers and the defense of Taylor Martin and Khara Fesperman propelled the Falcons to victory in the first set. Moseley had clutch kills to break a 21-all tie and for a 24-21 lead.
Kamryn Stamey and Brandy Parker had three kills each, and Madilyn Jones had back-to-back aces as the Raiders took control of the second set.
The match was decided by a handful of critical points in the third set, and both teams battled for them with their best volleyball of the evening.
Myers had several big kills before a kill by Moseley gave the Falcons a 25-24 lead.
After Horne took a timeout, South tied it on a kill by Stamey.
“We weren’t quitting today,” Stamey said. “We were going to fight this time.”
Labbe, a 5-foot-8 all-county performer, made the difference for the Raiders at the end. Her terrific dig led to match point for the Raiders.
“There’s no doubt this match came down to the end of the third set,” Labbe said. “I just tried to encourage my teammates. They came through.”
South had all serious momentum after pulling out the third set and rolled easily in the fourth. Mikayla Strickland jumped off the bench to produce four aces.
“We just lost our communication,” said Martin, West’s libero. “We stopped playing smart.”
Labbe had 30 assists and seven kills for the Raiders. Stamey had 11 kills. Hannah Lambert, who missed part of the season after reconstructive surgery on all 10 toes, came through with six kills and 20 digs.
“We’re glad we’ve got her now,” Labbe said. “Hannah was great today.”
South libero Abby Fields had 22 digs, while Parker had 20.
Myers and Moseley had 14 kills each for the Falcons. Martin had 35 digs, Fesperman had 22, and Savannah Cline had 18. Braelyn Faust had two solo blocks and three block assists.
South (9-6, 6-6) is sixth in the 10-team SPC, while West (4-12, 4-8) is seventh.
South travels to first-place Cox Mill on Thursday, while West is home against second-place Carson.