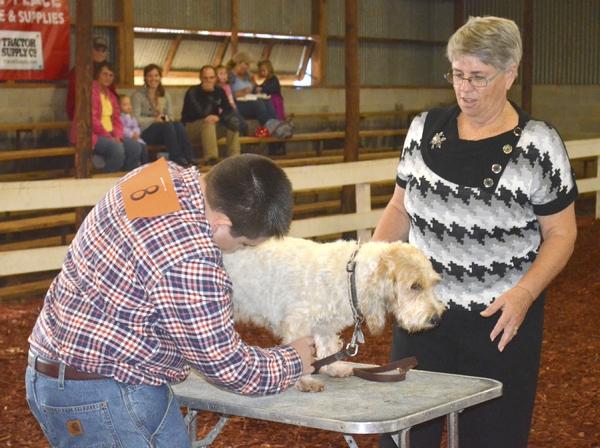 The 4-H Junior Dog Show is held every year at the Rowan County Fair and it is a fun and educational experience that focuses on the youth and their ability to relate with their dogs. This year’s show had 14 exhibitors competing.

Lizzie Brilliant and Honey, a labradoodle, placed first in the sporting class. Sophie Hill and Zeus, a labrador, placed second. In the non-sporting class, Tiffin Jacobs and her French bulldog George placed first.  Placing second and third were Anna Booth and her cavapoo Gracie and Maggy Moore with her corgi/Boston terrier mix Cookie, respectively.

Placing first in the toy class was Gracie, a cavapoo, and her handler, Anna Booth.  In the herding class there were five competitors:  Anna Booth and Vos, a Belgian malinois; Kara Crotts and Nexus, a smooth collie; Wade Moon and Shell, a border collie; Maggy Moore and Cookie, a corgi mix; and Reagan Powell and Stella, a border collie. Moore won first, followed by Crotts in second, Booth in third, Powell in fourth, and Moon in fifth.

The puppy class is for dogs aged 4 months to 1 year old.  Showing in this class were Booth and Gracie, Hill and Zeus, Powell and Stella, and Ben Starnes with his bloodhound Hazel.  Placing first through fourth were Hill, Starnes, Powell and Booth, respectively.

The cloverbud class is for youth ages 5 to 8 years old. Earning first place was Crotts and Nexus, second was Brilliant and Honey, third was Booth and Gracie, fourth was Emery Starnes and Fern, fifth was Moon and Shell, and sixth was Powell and Stella.

Dogs who are over 10 years of age can compete in the senior citizen class.  This year, we had one entry in this class.  Cookie placed first with her handler Maggy Moore.

All of the first place winners then returned to the ring for the Best of Show Award.  Madison Noble and Tessa earned this award.  The show was judged by Lynn Meeks, who loves sharing her passion for dogs and helping youth learn more about showing dogs.

The final two classes of the show were trick and talent.  The trick class consists of commands (such as sit, stay, roll over, bark and beg).  The talent class is something special the dog can do (such as jump through a hula hoop). Both classes are judged by audience applause. Entering the trick class were Booth and Gracie, Crotts and Nexus, and Oster and Pretty Girl. Gracie won the trick class, with Nexus and Pretty Girl tying for second. Entering the talent class was Anna Booth with both Gracie and Vos. Vos placed first, with Gracie earning a close second.

At the conclusion of the show, there was the dog dress-up show. This year, we had one entry. Making an appearance was Sam Oster as Frankenstein and Pretty Girl as a spider.

The ‘very rich’ Grace Littlejohn comes home for a…