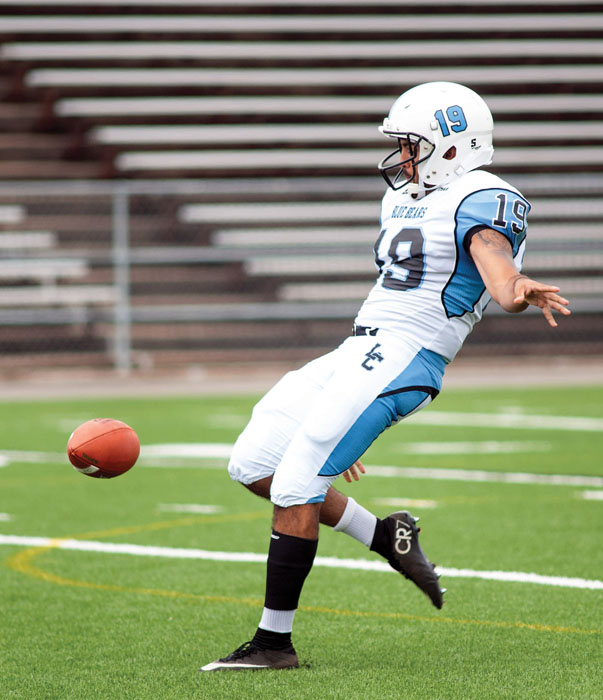 SALISBURY — Livingstone’s trip to Bowie State, 20 miles from Washington, D.C., resulted in a football loss but an educational gain.
The Blue Bears took in the standard tourist sights, including the Washington Monument and the White House.
The highlight for many team members was a stop at the Lincoln Memorial, the venue from which Martin Luther King’s 1963 “I have a dream” speech still echoes. That was the defining moment in a Civil Rights Movement that changed the world.
“We have a total program,” Livingstone coach Daryl Williams said. “We want to provide opportunities for culture as well as football. We’ve got players from junior colleges, from Florida, from California. We’ve got a lot of guys who had never seen their nation’s capital.”
Williams said many players quietly thanked him for the opportunity. In the big picture, the D.C. visit, will stay with the Blue Bears long after they’ve forgotten Saturday’s 45-17 CIAA gridiron setback.
“Seeing the White House definitely was on my bucket list,” senior kicker Leo Manzo said. “The trip was cool. I really like where playing football at Livingstone has taken me.”
Manzo used his strong leg to become a soccer and football star in the small Georgia town of Flowery Branch, outside of Atlanta. Flowery Branch is the town that produced South Carolina and Cleveland Browns quarterback Connor Shaw.
“I was a lineman in Pee Wees,” Manzo said. “But since then, I’ve always been a kicker.”
Manzo attended major kicking camps, but he was still available when he received a standard recruiting e-mail from Livingstone. He’d never heard of Livingstone, but he ended up traveling to Salisbury to suit up for the Blue Bears.
He’s been an importat addition.
“My career highlight, at least so far, was kicking the game-winning field goal against Bowie State last year,” Manzo said.
He was the CIAA Special Teams Player of the Week for making that kick with three seconds left and providing a 36-33 victory.
Manzo is th emain component of the Blue Bears’ kicking game. He handles field goals, PATS, kickoffs and punts. That’s a job that is sometimes divided among two or even three players at the college level.
“I’ve really worked a lot, especially on punting,” Manzo said. “I want Livingstone to have a kicking edge in CIAA games. That’s important to me.”
Manzo earned second team All-CIAA honors last season as a punter. He averaged 42.4 yards on 39 punts, while adding 28 PATs and three field goals as a placekicker.
He’s been even more efficient as a senior. In the two games the Blue Bears have played in which statistics are being counted, he’s 9-for-9 on PATs and 1-for-1 on field goals. His five punts have averaged 45.0 yards and his kickoffs often sail to the end zone.
Manzo is an athlete. He’s capable of making a TD-saving tackle, although if that happens, it means something went wrong.
“I’m not one to shy away from contact, and I’ve got a few assists on tackles here,” Manzo said. “But that’s not the plan. The plan is to kick it well enough that I’m not making a tackle.”
While Saturday’s loss was disappointing, it wasn’t disheartening. Manzo is confident the Blue Bears can put it behind them and move on to this weekend’s home game with Elizabeth City State.
“That’s been one of the changes during my time here,” Manzo said. “Since Coach Williams took over after my freshman year, everybody’s been willing to work very hard. We just have to listen to what he says, and we’ll be fine.”
Manzo is on track to graduate in four years.
“I’m a business major, but one thing I’m looking into is being a kicking coach, maybe a kicking coach here,” Manzo said. “I’d like for Livingstone to always have that kicking edge.”