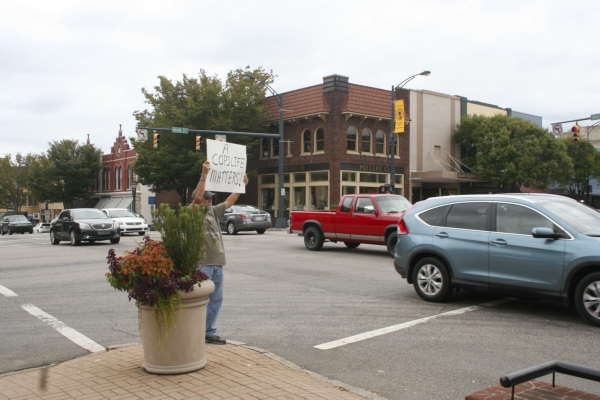 John Bouk holds up his sign on the square in downtown Salisbury. Photo by Susan Shinn

Bouk demonstrates in support of police John Bouk, whose son is a police officer, believes more people need to show support for law enforcement, and he’s leading by example. Photo by Susan Shinn, for the Salisbury Post

One man. One poster. Ninety-five lives.

If you know John Bouk, you know he is passionate about a lot of things. One thing he’s especially passionate about these days is his support for law enforcement. Son Adam is employed by the Salisbury Police Department, and Bouk has been deeply affected by the fact that nationwide this year, some 95 officers have died in the line of duty.

“I’m just sick and tired of all this stuff on TV,” John says.

He decided to do something about it.

On his lunch break each day from the J.F. Hurley Family Y, where he is property manager, John takes a simple, hand-lettered poster and stands at the square.

In large, black letters, he’s written “A Cop’s Life Matters!” He holds it up while the noon-day traffic whizzes by.

So far, he says, the response has been positive. So far, he’s a one-man show. But that’s fine by him. For years, John has been president of Godstock, a local grassroots organization that assists families of critically ill children.

He says his wife, Louise, would be with him, were she not experiencing recent back woes.

So he stands, alone, at the square, or down in front of the courthouse. The law enforcement officers who work there came to the front door last week, smiling and waving and giving him thumbs-up.

He says drivers toot their horns and throw up their hands to wave at him. He says he wouldn’t mind some company.

Someone asked if it were OK to take his picture and post it on Facebook. He said that’d be fine.

“I don’t own a computer,” he says, “but apparently, that Facebook is a big deal.”

John says he can’t understand the people who’ve seemingly been in favor of the recent killings of police officers. He was especially troubled about the sheriff’s deputy in Texas who was gunned down while pumping gas.

“God help somebody who did that to my son,” he says. “I don’t understand any of it. It’s beyond me. I’m just tired of people sitting back and doing nothing.”

“The majority of cops are good people,” he says.

The rash of recent shootings in Salisbury is also understandably troubling to him.

“I’ve always been concerned about my son,” he says, “but now even more so.”

John says there seems to be more concern about how “thugs” are treated.

“And I want you to use that word,” he says. “By God, people don’t care about how cops are being treated.”

Because his son is a police officer, he’s gotten to know other officers in the department.

“My son has a cookout every Fourth of July,” John says, “and I get to meet the officers and their families.”

He hears their stories, and he worries.

That’s why you’ll see him standing at the square, or in front of the courthouse with his simple, hand-lettered poster.