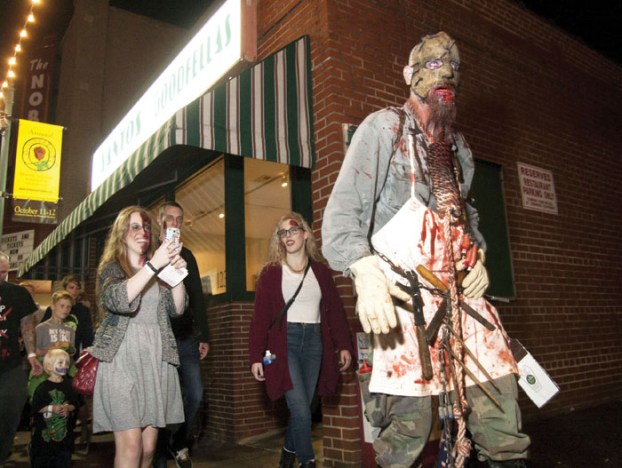 Zombies will return to town this weekend as Downtown Salisbury Inc. promotes emergency preparedness with a dystopian twist.

Last year’s Fifth Annual Zombie Walk attracted an estimated 1,200 visitors and area residents, with participants coming from as far away as Georgia.

This year, Downtown Salisbury Inc. is holding a two-day event expected to attract some 2,000 people.

It starts with Ready Rowan Night‬ on the Town on Friday from 5-9 p.m., with downtown stores staying open late. The highlight will be a giant scavenger hunt throughout downtown to prepare for emergencies and disasters by building your own Family Disaster Supply Kit.

Each family will get a map and a free drawstring “go bag” from the Downtown Salisbury Inc. tent in front of Wells Fargo on South Main Street. (If it rains, the pick-up tent will be moved inside the lobby of the Visitors Center at 204 E Innes St.)

Participants should also be on the lookout for Golden Tickets hidden downtown that can be turned in for Downtown Dollars.

The zombies will come out Saturday from 1-9 p.m., concentrating on a festival area that includes the 100 block of East Fisher Street and the large parking lots off of South Lee Street between East Fisher and East Innes.

The Centers for Disease Control first promoted a connection between zombies and emergency preparedness several years ago, warning of a “zombie apocalypse.” The tongue-in-cheek campaign caught on.

Special guests include Savana Wehunt and Santiago Cirilo, whose acting careers include appearing as characters or stunt doubles in AMC’s “The Walking Dead.”

Tickets will be available for purchase at registration, located on East Fisher Street beside Thread Shed Clothing, 133 S. Main St.  The cost is $10 for adults and $5 for children 12 and under. The ticket covers a four-minute zombie makeover by professional makeup artists, a souvenir glow-in-the-dark event cup and five raffle tickets for door prizes given away throughout the event live on stage.

Participants who bring at least two canned food items to registration can get a $2 discount. The food goes to Mr. Mike’s Food Pantry in western Rowan County.

Glow-in-the-dark T-shirts commemorating the event will be on sale for $12 and $14, depending on size.

A full day of activities is planned. The actual walk will take place from 7:30 to 8:30 p.m. and end with a “Thriller” flash mob. Costume contest winners will be announced at the end.

Ticket proceeds and T-shirt sales will go to benefit Mr. Mike’s Pantry, the Humane Society of Rowan County and Downtown Salisbury Inc., the hosting organization, which is also a nonprofit organization.

For details on the weekend’s events, go to downtownsalisburync.com.

For more information on local emergency preparedness, including how to sign up for special alerts, go to RowanReady.com.

Too cloudy here for supermoon?

Stargazers are about to get a double celestial treat when a total lunar eclipse combines with a so-called supermoon. Those... read more