The ‘very rich’ Grace Littlejohn comes home for a spell 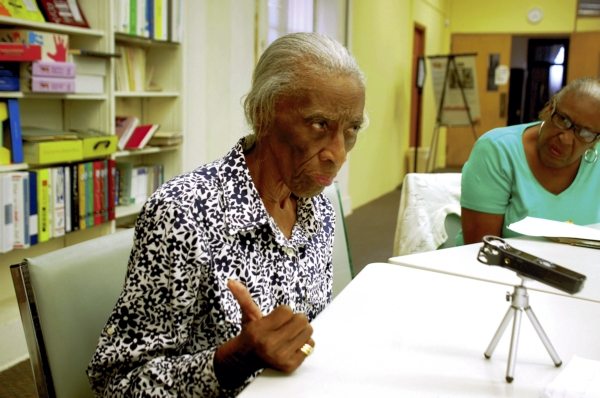 Mark Wineka/Salisbury Post Sitting in the library at the fomer J.C. Price High School, where she attended school in the 1930s, 98-year-old Grace Littlejohn makes a point with an interviewer as her daughter, Alice LaFrieta McMullen, listens in.

SALISBURY — Just mention Dixonville, and the memories flood back for Grace Littlejohn.

“It was an enterprising community,” Littlejohn said, and she doesn’t forget Lincoln School, First Calvary Baptist Church and the Dixonville Cemetery

Before urban renewal pretty much obliterated Dixonville in the 1960s and 1970s, this African-American community was never considered a wealthy part of town, though Grace Littlejohn might take issue with that observation.

“I must say my parents were outstanding,” Littlejohn said. “I consider myself a very rich person.”

Littlejohn, 98, traveled to Salisbury recently for the Dixonville-Lincoln Reunion. She then stayed in town more than a week, while repairs were being made to the Old Concord Road house she inherited at her mother’s death back in 1980. She and her daughter, Alice LaFrieta McMullen, live in Washington, D.C., where Littlejohn forged a long career as an educator.

“All I know is, I’m the driver,” LaFrieta McMullen said.

Gretchen Witt, head librarian of the History Room at Rowan Public Library, sat down with Littlejohn last Friday in the library of the old J.C. Price High School on West Bank Street. Littlejohn attended school here in the 1930s, before going on to Livingstone College for her undergraduate degree.

In 2008, Spencer authored and compiled the book, “Remembering Dixonville and East End Salisbury, North Carolina,” and she often attends the Dixonville-Lincoln Reunions.

She scoffs at the notion that Dixonville and the East End were two separate neighborhoods.

“All my life, I lived in Dixonville,” she said proudly.

Littlejohn also wasn’t a fan of the urban renewal that changed the East End and made Dixonville an often forgotten community, except for people such as Spencer who are trying to preserve what history they can. Lincoln School and the city-owned Dixonville Cemetery are among the few Dixonville landmarks you can actually walk up to today.

Littlejohn’s mother’s house was taken in urban renewal on April 26, 1972, through the government’s use of eminent domain. The family fought it in Superior Court, but to no avail. The government ended up paying $19,500 for the house, and Alice Henderson was one of the fortunate residents who was able to build a new home in about the same spot — the one Grace inherited and has been renting over recent decades.

Still, Littlejohn doesn’t think it was right. In her mother’s case, it took a home she had long paid for. Others in Dixonville were in the same boat.

“They did that when many people were on Social Security,” Littlejohn said. “They couldn’t go out and build another house.”

With a gun in her hand, her Aunt Lilla Butner stood in front of one of the bulldozers at her house in the East End. She eventually gave in, too.

“Some things were not fair,” Littlejohn said. “Sometimes, that happens.”

When she still lived in Dixonville, Littlejohn worked with the Rev. S.R. Johnson, then pastor at First Calvary Baptist Church, on a clean-up, fix-up, paint-up campaign for the community. “Little did I know I was preparing for eminent domain,” Littlejohn complained.

Littlejohn’s Dixonville childhood remains fresh in her memory. Her nickname was “Pet Milk,” and she laughed, remembering that anytime the kids played cowboys and Indians, “I was the Indian,” because of her long hair.

Her parents were Clanton and Alice Ellis Henderson. Among many hats he wore, Clanton Henderson worked as a porter for Southern Railroad. He wasn’t the kind of porter who looked after passenger or sleeper cars. He stayed in Salisbury at the train station and helped tend to matters there.

Clanton Henderson also worked sometimes for Dr. Clement; her mother, for Dr. West. Her father helped out at the Old Hickory Club. In addition, he drove the community’s midwife, Mrs. Boger, to people’s homes when there was a baby to deliver. Her father had a Model T Ford, Littlejohn recalled.

Clanton Henderson discouraged his children from going downtown. Rather, he might bring home four or five boxes of shoes from a store for Grace to try on. After she chose the pair that fit and was to her liking, he took the other boxes back to the store.

Her family lived in what Littlejohn came to describe as “The Recycle House.” Her father had bought much of the timber from a torn-down Colonial home, and Clay Stout built their house on Old Concord Road from the wood and other salvageable materials. It was the one lost to urban renewal.

Alice Henderson would buy the material for her daughters’ dresses and make them herself. “When I went out,” Littlejohn said, “I looked nice.”

Littlejohn said she played and fought in the cemetery as a child, and she and her friends passed through it almost daily as a more direct route to Lincoln School.

The cemetery had hundreds of markers, as Littlejohn remembers it. Only 28 markers or pieces of markers are left, and Grace said she bets “my family probably had 28 people there” just by itself.

Based on interviews Spencer has done through the years and photographs of other places along Old Concord Road, Spencer thinks there was a higher elevation in that area than there is now, and again, she thinks urban renewal had something to do with it. Littlejohn agreed.

Charles Ellis, an uncle of Grace’s, was a principal in the Ellis-Magnum-Fair Funeral Home. He also had a taxi cab and would transport teachers living in Salisbury to the Dunbar High School in East Spencer.

For the eight or so years, while attending Price High School and Livingstone College, Littlejohn had to walk the considerable distance to and from her classes on the West End. She was a classmate of Elizabeth Duncan Koontz’s and said their years at Price High School were positive and happy ones.

“This school gave me a wonderful background,” said Littlejohn, a former national president of the Price Alumni Association, “so it’s great to be home.”

She graduated in 1938 from Livingstone College, where she studied mathematics, natural science and biology. “Really, I was interested in medicine,” she said. Grace met and came to know her first husband, Richard Franklin McMullen, in their math and science classes at Livingstone College.

The McMullens would go on to study at several different universities and colleges. Grace earned her master’s in library science at N.C. College in Durham (today’s N.C. Central University). The lure of tenure and better pay led them to the Washington, D.C., area by 1959.

Grace taught for about seven years in junior and senior high schools before becoming an assistant librarian at Dunbar High School in Washington in 1966, then senior librarian two years later. She retired from the school in 1990 and continued to live in the D.C. area, often coming back to Salisbury to check on her mother’s property and see old school friends.

She chuckled, thinking back to the reputation she had with the students at Dunbar.

“That old mean librarian,” she said. “That’s how I was identified.”

After her first husband’s death, Grace married James Littlejohn, who also is deceased.

The retired educator said she doesn’t understand why schools removed subjects such as home economics and woodworking from the curriculum. If public schools aren’t doing the job they once did, Littlejohn said, she doesn’t put all the blame on the parents, nor does she put it all on the teachers.

But she does think education has somehow been “sabotaged” and acknowledges she doesn’t quite know how to fix it.