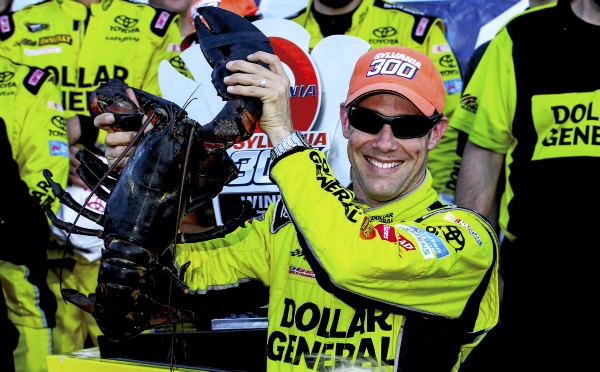 LOUDON, N.H. (AP) — Matt Kenseth pushed Kevin Harvick down the stretch and took the lead for good when the defending series champion ran out of gas Sunday at New Hampshire Motor Speedway in the second race of the Chase for the NASCAR Sprint Cup Championship.

Kenseth advanced to the second round of NASCAR’s playoffs and gave Joe Gibbs Racing its fourth straight win.

Harvick had the dominant car and led the most laps but a gamble to stretch his fuel to the end backfired and he faded to 21st. He finished 42nd last week in the Chase opener and will surely have to win next week at Dover to advance to the second round.

JGR continued to prove it will be the organization to beat in the Chase. Denny Hamlin, the winner last week at Chicagoland, was second for JGR. Chase drivers took eight of the top 10 spots.

The 16-driver Chase field will be cut to 12 after Dover.

“We had to be there to win it,” Kenseth said. “I was giving Kevin everything I had. I thought he had us beat. He had the better car.”

Kyle Busch, Paul Menard, Harvick and Clint Bowyer are the final four drivers on the brink of elimination. They would advance with a victory, but Jimmie Johnson stands in their way at Dover, where he has a track- record 10 victories.

“Dover is a good track for us, a victory would be a good shot in the arm for us,” Johnson said.

Kenseth won for the fifth time this season and stalked Harvick over the final tense laps that ended when the No. 4 Chevrolet had nothing left in the tank.

Harvick was knocked out of the race last week when he connected with Johnson and blew a tire. He later got into an altercation with Johnson in the motorhome lot and shoved the Hendrick Motorsports driver.

Harvick led 216 of 300 laps and heads to Dover with one of the biggest must-win races of his career.

He wasn’t the only Chase driver whose championship hopes are on the rocks.

Busch was the first Chase driver to suffer serious damage when his right front tire blew and he hit the wall. Busch, who the July race in New Hampshire, took the No. 18 straight to the garage.

“It’s killed,” he said over the radio.

Fourth in the standings entering the race, Busch dropped to 13th in points after he finished 37th.

With every point so valuable, his JGR crew hurried to repair the Toyota and he returned to the race more than 30 laps behind the leader.

Brad Keselowski took a big points hit as well, black flagged late in the race after a review showed he jumped the restart while racing for the lead. He stayed on the lead lap but sunk to 25th after the penalty. He rebounded to finish 12th.

“It’s an entertainment sport, not a fair sport,” Keselowski said.

Carl Edwards, the polesitter, was black flagged for running over equipment on pit road. Johnson cut a left front tire with 100 laps left and plummeted from third to 30th.

Even buried in the standings, Gordon refused to rule out Harvick and Kyle Busch as Chase threats.

“You know Harvick is going to be on a tear. Maybe Kyle Busch, too,” he said.