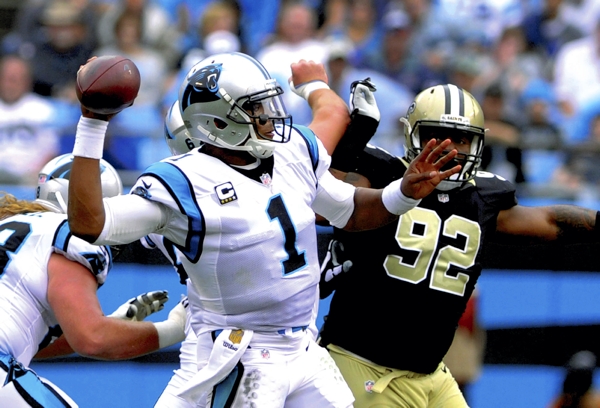 CHARLOTTE (AP) — Cam Newton has the Carolina Panthers off to a perfect start.

In one of the most complete efforts of his five-year career, Newton completed 20 of 31 passes for 315 yards with a pair of touchdowns to tight end Greg Olsen and also ran for a score as the Panthers defeated the New Orleans Saints 27-22 on Sunday.

The Panthers are 3-0 for the first time since reaching the Super Bowl in the 2003 season.

“Outstanding,” coach Ron Rivera said of Newton’s performance. “He made a lot of good decisions.”

Newton’s maturation as a signal caller was on display on a third-and-2 at the Saints 13 with his team leading 20-16 in the fourth quarter.

He walked to offensive line, looked over the defense before standing up and checking into a different play. Newton then faked the handoff up the middle and rolled to his left on a quarterback bootleg and scored easily.

“With that play we have a high tendency of doing something else to show the defense one thing and counteract and do another,” said Newton, who has thrown for five TDs this season and run for two.

It was Newton’s 35th rushing touchdown of his career, tying him with Randall Cunningham and Steve Grogan for seventh-most in NFL history by a quarterback.

Luke McCown, starting in place of the injured Drew Brees, completed 31 of 38 passes for 310 yards, but it wasn’t enough to save the Saints (0-3) from falling three games behind the division leading Panthers and Atlanta Falcons in the NFC South.

It was the first game Brees has missed because of injury since joining the Saints in 2006.

The previous time McCown started was Sept. 18, 2011, a game in which he threw four interceptions in a 32-3 loss while playing for the Jacksonville Jaguars.

He was much better on Sunday, getting the ball out quickly and frustrating the Carolina defense.

“I thought he showed a lot of poise and I was really proud of the way he played,” Saints coach Sean Payton said of McCown, who fell to 2-8 as an NFL starter. “Our margin of error isn’t that (easy) to overcome.”

McCown started fast, completing 14 of 15 passes for 100 yards on the first two drives, using shot passes underneath the coverage. Mark Ingram’s 5-yard touchdown run put the Saints up 10-0 before the Panthers had run their eighth offensive play from scrimmage.

But Newton and Olsen battled back.

The Pro Bowl tight end had eight catches for a career-high 134 yards. The Saints attempted to pack the box defensively against the Panthers, leaving Olsen open repeatedly on crossing routes.

“It just goes to show a lot about the guys we have here,” Olsen said. “There’s a lot of resiliency, and not a lot of panic. We’ve been in some tough situations over the years.”

Panthers cornerback Josh Norman, who claimed he was a top five NFL cornerback this summer, continues to make plays. Norman sealed the game with a leaping interception of McCown in the end zone with 1:09 remaining.

Norman, who squabbled with defensive backs coach Steve Wilks on the sideline over a missed assignment earlier in the game, said he was seeing stop-and-go moves all day and tried to keep his leverage.

“Once I saw the ball release, man, I was loving it,” Norman said. “I saw it, and my eyes got big. I tried to target the ball, and God gave me the wings to fly.”

McCown thought he had a touchdown.

“We felt like we had them on their heels and we wanted to take a shot,” McCown said.

It was the second straight week the Panthers needed a late stand from their defense to seal the victory.

Newton said after the game he was upset over what he felt was a borderline late hit by Saints defensive tackle Tyeler Davison — but was even more baffled by the explanation he said he received from referee Ed Hochuli.

“The response that I got was, ‘Cam you’re not old enough to get that call,’” Newton said after the game. “I’m looking at him like, ‘What? Geez, I didn’t think you had to have seniority to get a personal foul or anything like that.’”

NFL spokesman Michael Signora told The Associated Press that “officials make decisions based upon the play on the field, and no other factors.”

NOTES: Panthers DE Charles Johnson (hamstring) and RB Jonathan Stewart (leg) left the game in the second half with injuries and did not return. … Marcus Murphy returned a punt 74 yards for a touchdown after Carolina’s Teddy Williams was called for running out of bounds on the previous play, forcing another kick.