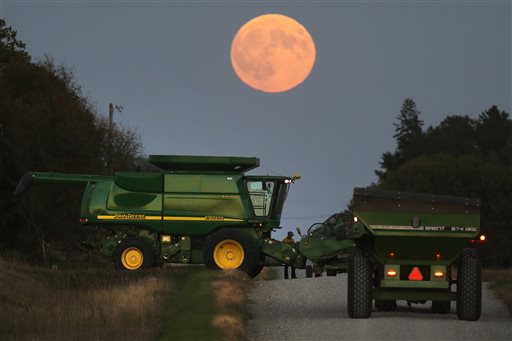 Clint Brown of Mason City, Iowa, mounts the head on his father's combine as the so-called supermoon rises on Sunday, Sept. 27, 2015. AP Photo

Too cloudy here for supermoon?

Stargazers are about to get a double celestial treat when a total lunar eclipse combines with a so-called supermoon.

Those in the United States, Europe, Africa and western Asia can view the rare coupling, weather permitting, Sunday night or early Monday.

It’s the first time the events have made a twin appearance since 1982, and they won’t again until 2033.

When a full moon makes its closest approach to Earth, it appears bigger and brighter than usual and is known as asupermoon.

That will coincide with a full lunar eclipse where the moon, Earth and sun will be lined up, with Earth’s shadow totally obscuring the moon.

In Europe, the action will unfold before dawn Monday.