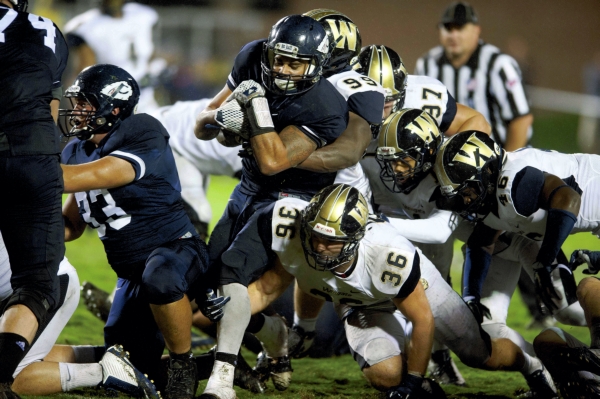 SALISBURY — Catawba football doesn’t fare well against Wingate, doesn’t fare well in the rain and doesn’t fare well the week after a victory against Carson-Newman.
There was a lot of history to overcome, and Catawba didn’t.
Catawba’s ugly 17-0 loss to Wingate at Shuford Stadium on Saturday evening was painful to watch for most of a rain-soaked crowd of 1,862. Well, except for the folks who love punts. They got to see 20 — 10 by each team.
“Every time we we sent our special teams out there, I held my breath,” Wingate coach Joe Reich said. “We were playing in conditions where it’s easy to make a special-teams mistake that costs you the game. We didn’t make any.”
Catawba lost to the Bulldogs (4-0, 2-0 SAC) for the fifth straight time and the Indians now are a dismal 2-9 all-time in games following those rare, exhilarating victories over Carson-Newman.
Workhorse Lawrence Pittman rushed for 193 yards and two scores on 31 carries for the Bulldogs.
Catawba managed a respectable 168 rushing yards but mustered a meager 98 passing yards on 38 attempts.
“We didn’t execute on offense and that made things tough for our defense,” Catawba coach Curtis Walker said. “Our defense had a great showing and we had enough stops to win most ballgames, but we’ve got to find solutions on offense. We’re sitting now at 2-2 and I didn’t think that’s where we’d be.”
It’s not like Catawba (1-1 SAC) failed to finish in the red zone against Wingate. The Indians never got there.
Catawba had 15 empty offensive possessions and never got close enough to the Wingate end zone to see it without binoculars. Catawba sent in Chad Hollandsworth for a 43-yard field-goal try in the second quarter, but the Indians didn’t execute the snap and hold part of the equation, and Hollandsworth’s foot stayed idle.
Catawba even tried a trick play — a pass off a reverse by receiver Keyon West, looking deep for Gary Williams. Wingate looked burned for a moment but recovered and made the play.
Catawba has been shut out only twice in the last 21 seasons, and both of those blankings and spankings came in dreary, dank, rain-splashed games. This was the second one. The first was a soggy 27-0 loss to Newberry in 2013, early in Walker’s coaching tenure.
“It was just a great job all day by our defensive players and staff,” Reich said. “Catawba has a team we respect and an offense we respect so much that we’ve actually stolen a few ideas from them. That’s a very complex offense they run, but we were able to contain them.”
Wingate hasn’t allowed a point in the first half in its four outings. This was the third shutout for the Bulldogs, although the Indians insisted it was what Catawba failed to do more than what Wingate did to them.
“We just played a bad, bad offensive game, and the weather was no excuse for that,” said Cary Littlejohn, who accounted for a high percentage of Catawba’s offense with 96 yards on 20 carries. “I still don’t believe Wingate is a better team, but they came out and played today, and for whatever reason, we didn’t. Our defense was great, but we were bad on offense. It’s as simple as that.”
Catawba’s defense was good enough that it was still 0-0 at halftime.
Outside linebacker Jamal Lackey finished with 11 tackles. Inside linebacker Michael Peppers had two sacks and forced a second-quarter fumble that was recovered by Kyle Kitchens.
“They were running a power play off motion and we had prepared for it,” Peppers said. “I got downhill and was able to punch the ball out of the runner’s arm. That fumble came right after we’d thrown an interception, and I thought it was a play that might get us going.”
It didn’t.
After 36-plus scoreless minutes, Wingate finally broke through with a 40-yard field goal with 8:13 left in the third quarter. Kicker Caleb Baird, holder Chandler Phllips and long snapper T.J. Bell, who played high school ball at Carson, executed in the foul weather.
“We knew Catawba was coming after that field goal, but we got the job done,” Bell said. “We felt good when we got points on the board because our defense has been playing like crazy.”
Mycah Gaylord broke a 12-yard run for Wingate on a third-and-6 from the Catawba 21, and the Bulldogs punched in their first TD five minutes after that breakthrough field goal.
“I thought we got a little impatient on offense in the second quarter and early in the third,” Reich said. “But then we just decided to pound away. Catawba’s defense played really hard today, but we were finally able to wear them down.”
The outcome wasn’t in doubt when Pittman broke a 55-yard run late in the game that led to Wingate’s final TD. That run changed the stat sheet some, but Catawba’s defense played lights-out for a long, long time.
“We fought long and we fought hard,” said Peppers, who pushed Wingate out of field-goal range with one timely sack. “We tried to put our offense in good position, but we needed to force more turnovers.”
Wingate had only one turnover. Catawba had two.
“We had so many missed opportunities in the passing game,” Walker said. “If we got the throw there, we didn’t catch it. Balls hit us in the face mask and balls went through our arms. We were just out of sync all day, and we’ve got a lot of work to do.”
Catawba is home against Newberry next Saturday afternoon.
“Newberry is just as good as Wingate, so we’ve got to get better,” Peppers said. “We can’t let one bad game break us.”

SALISBURY — All of a sudden Salisbury’s cards may be worth keeping. After four straight losses to 3A and 4A... read more