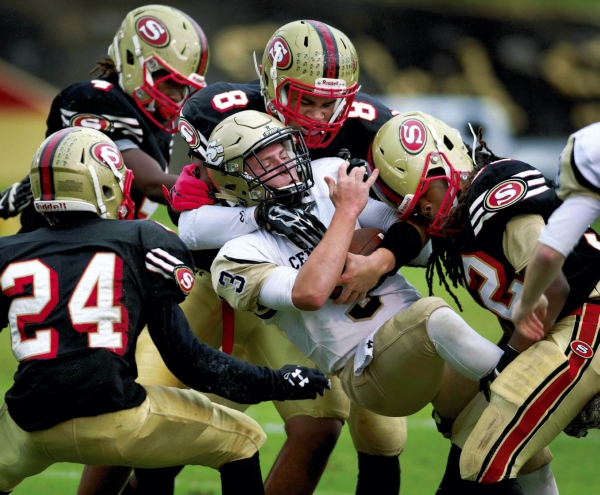 SALISBURY — All of a sudden Salisbury’s cards may be worth keeping.

After four straight losses to 3A and 4A schools, the Hornets picked on someone their own size Friday and collected a 31-6 win over Surry Central.

“We know what we’ve got,” winning coach Ryan Crowder said after Salisbury (2-4) closed the non-conference portion of its season at soggy Ludwig Stadium. “We can be successful like this. It’s not about the kids who graduated last year. It’s the kids who came back — and they just got back to doing what they do well.”

The SHS players on hand disposed of the 2A Golden Eagles (2-4) in imperial fashion. The Hornets still haven’t completed a touchdown pass this season, but their ground game produced a season-best 278 yards and three scores. Couple that with a defense that forced six turnovers and limited Surry Central to six first downs and you’ve got a triumphant, just-add-water recipe.

“Every team starts off with a few bumps and bruises,” senior linebacker D.J. Alexander said after confiscating two Surry fumbles. “We’ve had some hurdles and we’ll have a few more. There’s still a long way to go. But now we know we can shut teams down.”

They knew it by halftime. Surry’s five first-half possessions yielded two punts, two lost fumbles and a turnover on downs at the Salisbury 30-yard line.

“We went all in and played as a team,” said junior Tywun Rivens. “You read the guards, find the ball and attack. All teams have some talent, something they’re good at, and they had a good running back. But we believe hard work beats talent.”

On this night it did. Salisbury’s offense — quiet for much of the season — finally made some noise late in the second quarter. Following a fumble recovery by Alexander at the Surry 20, quarterback Harrison Smith got the Hornets on the board when he handed off to Juan Fair for 16 yards and to Antwond Glenn for a touchdown with 2:53 remaining in the half.

“We just had to keep pushing,” Glenn said after rushing for 155 yards and two TDs. “Keep blocking, keep moving the ball and running hard. These past few games we’ve been giving up. Not tonight.”

Salisbury nourished its lead to 14-0 early in the third period after defensive lineman Naquay Simpson pounced on a loose ball deep in Surry territory. Four snaps later Glenn burst into the end zone on a 6-yard run off left tackle. The visitors answered with an 89-yard scoring play when Martin Palacios turned a short sideline pass from quarterback Chandler Johnson into marathon sprint down the right sideline midway through the third quarter.

“That was completely my fault,” said Crowder, also Salisbury’s defensive coordinator. “I tried to run a coverage that we hadn’t run in a long time and it just blew up in our face.”

It hardly mattered after senior Willie Clark bulldozed up the middle for a Salisbury touchdown and the defense recorded a safety, making it a 23-6 ballgame with one quarter to play. In the fourth punt returner Shaquez Strickland returned a short kick 28 yards for his third touchdown of the year.

“Salisbury did a couple of things tonight that we hadn’t seen on tape,” Surry coach Monty Southern said. “We’d seen them a lot in the gun, but they got under tonight and just really powered past us. Their front line outweighed our defensive line and they wore us a little bit.”

It was an impressive Salisbury win, even if the opposition played a careless game. As for the naysayers who have written off the Hornets — who begin CCC play in two weeks — Alexander offered a spelling quiz: “R-e-l-a-x,” he said afterward. “We’re still here.”