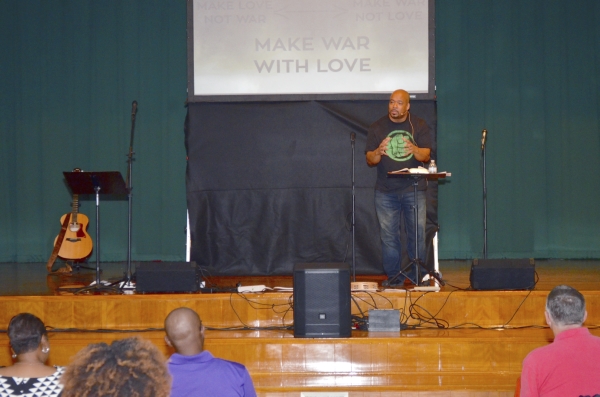 For Wilson, it was perhaps a natural outgrowth. Wilson said he grew up in the church and was called to be a minister. In 2007, he graduated from Southern Wesleyan University and became a pastor at a South Carolina church.

In his younger years, Smith likely wouldn’t have expected to be a church pastor. Smith said he was an atheist before becoming a christian. A Navy veteran, Smith recalls being 20 and questioning — Smith half jokingly called it terrorizing or undermining — a fellow seaman about his religious beliefs. Smith’s faith grew steadily. He recalled going to church on Jan. 2, 1994 and thinking “the Bible is alive and God speaks through it.”

Wilson and Smith’s lives intertwined in 2011.

The pair began chatting and found they “shared a similar heartbeat for ministry,” Wilson said.

At about the same time, Smith was an associate pastor at New Harvest Ministry. With the help of the church, Smith established Mission House and Wilson quickly became involved. It was, however, mostly an informal group.

Mission House met in Smith’s and Wilson’s house — a practice that continues today.

Both said they never intended to start a full-blown church. As participation grew, the informal meetings grew too large to have in a single house. Wilson and Smith were concerned they had grown into exactly what they didn’t want to become and they temporarily stopped.

Last year, however, they decided to do exactly what they had avoided — become a church.

The pair now says the method of assembly — a formal church service for example — isn’t as significant as the content of discussion.

Although it’s different than most churches, Smith said Mission House wouldn’t have been able to start formal services that were alien to Rowan County residents.

Mission House still has its informal meetings — the Bible Labs — during the week on Wednesdays.

Wilson’s formal title is executive pastor. His wife Hannah is the children’s pastor.

Dicy Mccullough Little did I know six years ago when I became pianist for Franklin Baptist Church what a warm... read more