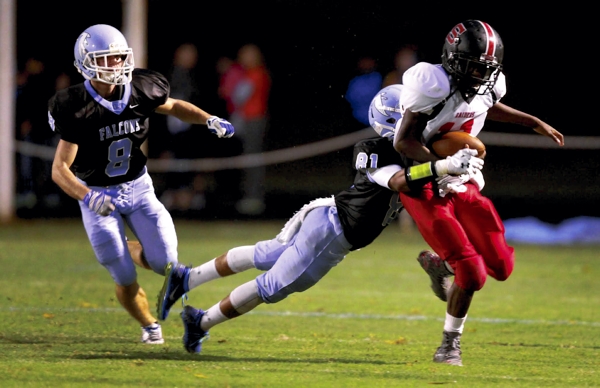 South Rowan’s Trey Littlejohn is caught from behind by West Rowan’s #81 Juwan Houston. Photo by James Sipes, for the Salisbury Post.

MT. ULLA — The South Rowan Raiders tried to shock the world at West Rowan Friday night but a three-touchdown flurry at the end of the first half gave the Falcons a happy homecoming game 28-6 victory instead.

The visiting Raiders (0-5, 0-2 South Piedmont conference) had two major scoring threats thwarted in the second quarter by the West defense and had to settle for field goals to lead 6-0. The Falcons (4-1, 3-0 SPC) seemingly flipped a switch at that point thanks to a pair of long kick returns to notch three touchdowns in the final four minutes of the first half to give them all the margin they would need for the win. Two of the scores actually came in the final minute of the half.

South Rowan coach Daniel Yow saw his young team take on the two top dogs in the South Piedmont conference in consecutive weeks and come up short despite playing fairly well. But the first-year Raider coach is not looking for moral victories.

“Right now, we are our own worst enemy,” Yow said. “We are the wall that is stopping us from winning ball games right now. Three times we were inside the five-yard line and could not punch it in. With a good team like West Rowan, you have got to make sure to capitalize on every possession.”

Playing on a soggy field and in a misting rain most the night, the two teams slugged it out to a scoreless tie in the first quarter dominated by the punting game, especially by South senior Marshall Long whose first three boots were 62, 63 and 75 yards respectively. As the second quarter opened, the Raiders used a big keeper run of 37 yards by quarterback Heath Barringer to reach the West 10. The Falcon defense threw up a wall behind Derrick Moreland and Dearius Phillips to halt the threat and force a 26-yard field goal by Brennan Lambert.

Two plays later after the kickoff, Austin Chrismon stripped the ball away from Jovon Quarles to give the Raiders the ball right back at the West 29. A Barringer pass to Tyler Rary gave them first and goal at the four. But the Falcon defense rose up again stopping Barringer on consecutive sacks by Moreland and Devin Turner to force South to settle for a 25-yard Lambert field goal and a 6-0 lead.

The game quickly and decisively turned the Falcon’s way on the ensuing kickoff when speedy J.T. Sanders gathered the kick at the three and broke free for 71 yards down to the Raider 26.

“When he kicked it, I dropped it and knew I had to make up for it,” Sanders said. “Then I saw the outside was open and got behind my blockers L.J. (Robinson) and Theo (Fisher) and off we went.”

Four plays later, West went to their workhorse Martavio Rankin for a one-yard touchdown dive. Austin Morrison’s extra point gave West its first lead, 7-6, with just over four minutes left in the first half. West forced a three and out and them caught a break when Long (7 punts for 50.7 average) shanked a 10-yard punt after a high snap to put the Falcons on the South 30.  Five plays later, Falcon quarterback Kacey Otto hit Kortez Weeks streaking across the middle of the end zone for a 15-yard scoring strike to make it 14-3 with just 50 seconds left in the half.

Instead of settling for the two-score lead, the West defense quickly forced a Raider punt. Kortez Weeks broke down the right side for a 42-yard return to the South 11 with just 7.2 seconds left in the half. Otto then lofted a perfect pass to the far corner of the end zone to Juwan Houston to expand the lead to 21-6 at the half. Otto completed just two passes in the game but both went for touchdowns in the decisive second period outburst.

“I was really pleased especially at the end of the first half when we stopped them on defense and got that quick score,” West coach Joe Nixon stated. “Our kids came out and executed very well tonight especially in not so great weather conditions.”

The second half was primarily a defensive struggle as South did reach the Falcon six once but missed on a field goal. The Raider defense did rise up and stop West on downs twice in the second  half, including once at the five. But that defensive stand led to disaster as the next play was a fumbled snap in the end zone by South recovered by the West junior linebacker Robinson for the coveted defensive touchdown.

The 28-6 final margin stood up the rest of the way as the sophomore runner Rankin pounded out the tough yards to gain a career high 105 yards on 21 carries plus his touchdown. “I like it that way,” Rankin stated, “the tougher the better, but I could not do it without my O-line.”

West tries to keep its perfect SPC mark next Friday at county rival Carson while South looks for its first win as they host Cox Mill.

HUNTERSVILLE — A.L. Brown won 42-20 at North Meck on Friday, a convincing road victory in their MECKA opener that... read more