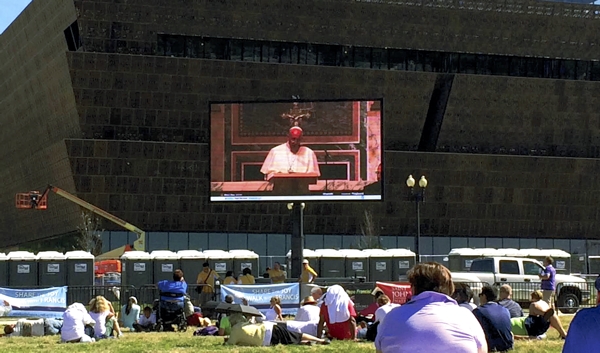 People sat on the lawn outside the Capitol to watch Pope Francis speak on a giant screen. Submitted photo

Calling Pope Francis’ visit to Washington, D.C., beautiful and inspiring, the Rev. John Eckert, pastor of Sacred Heart Catholic Church, is excited about the effect the head of the Roman Catholic Church could have on the United States.

“To see the Holy Father on the floor of Congress, hearing his talk, touching on so many important issues — I think that gives me hope, especially with all the bipartisanship, to have someone like him, one of the only world figures that can draw admiration and love of people from all generations, to hear him talk of hope and not falling into despair … to hear him talk about the dignity of all life,” about caring for all people, all stages of development, the poor, prisoners, the elderly is inspiring.

Eckert’s trip to Washington to see the pope came at the last minute, when Rep. Robert Pittenger’s office came up with seven tickets.

The Michael Zaldivar family from Sacred Heart went along. Also attending were Bishop Peter Jugis of the Diocese of Charlotte and Msgr. John Putnam, former pastor of Sacred Heart, along with other Catholic families from North Carolina.

Eckert met his brother, Mike, and their father, also named John, there. His father works for the Department of the Treasury in Washington and was told not to come to work that day.

Eckert, along with thousands of others, arrived at the Capitol at 5:45 a.m. to stand in line. Gates had opened at 5, and the pope arrived at about 9:30. Eckert and the crowd watched it on a Jumbotron near the west lawn. “It was awesome to watch that. It was described as an inauguration and state of the union combined.”

“It was a beautiful thing,” Eckert said. “An inspiring thing to see all the diverse crowds. Look at the floor of Congress, that’s pretty diverse. … It seemed like they got along yesterday.”

One woman told Eckert she’d never seen Washington this peaceful, “and that’s with tens of thousands more people there.”

Eckert said Pope Francis talked about all the important issues. “He talked about technology and the limit to technology. He brought up Lincoln and Martin Luther King Jr., Dorothy Day and Thomas Merton.” Day was a journalist and social activist. Merton was a prolific writer, both were converts to Catholocism.

He mentioned them as beautiful people who personified what makes America great and examples of faith being lived out,” Eckert said. “Day advocated the need for prayer and contemplation, as well as a dialogue, a culture of encounters.”

Eckert thought Pope Francis “personified that so well throughout his visit.”

When he finished his speech, the pope appeared on the balcony. “I’ve never been to St. Peter’s Square,” Eckert said. “This was an incredible historic event, to see him come out and wave and ask for prayers for himself, and speak of the children.” Eckert said he “really felt his presence.”

Seeing Pope Francis made Eckert feel very comfortable with the new pope. “When John Paul II passed away, and then we had Pope Benedict, he was familiar,” Eckert said, because much of what he read in seminary was written by the Rev. Joseph Ratzinger, who became Pope Benedict. Francis was someone he did not know much about.

“Seeing his approach, listening to what he had to say, strengthening the bishops in faith, which is what Peter was called to do” was inspiring.

“Seeing him on our soil was a shift for me.”

Pope Francis emphasized the dignity of all human beings. “He said don’t fall into despair. We have hope because of the hope in the love of God.

“I hope it has a good strong impact on our country, what he said and his example.”

And he hopes the visit has a good impact on how the pope sees the United States. “I hope he sees how alive the church is here. Like at Sacred Heart. At Easter we had 35 people come into the church. We have 216 students at the school and 260 in Faith Formation. We are growing and proclaiming the Gospel.

On Wednesday, Eckert and his mother, along with Putnam, went to the National Mall to see some of the parade. “I was about 20 yards away when he drove by. It was great to be that close to him.”

Zaldivar, his wife Hilda and their two children got tickets to sit on the Capitol lawn, he told McClatchy’s Washington bureau. Zaldivar is Filipino and told the McClatchy reporter he was moved by the pope’s words message about immigration, reminding Congress that most people “were once foreigners.” His children — 10-year-old daughter Kyna and 6-year-old son Mikko — were excited to see the “popemobile.”

“It was really cool. I wasn’t able to touch him, but he was just right in front of us,” Zaldivar told the McClatchy reporter.

Eckert said it made him proud to be an American, proud to be a Catholic priest and proud to have the Holy Father at the nation’s capital.

“To see him here in our home is an excellent gift, and I’m grateful to have been so close.”