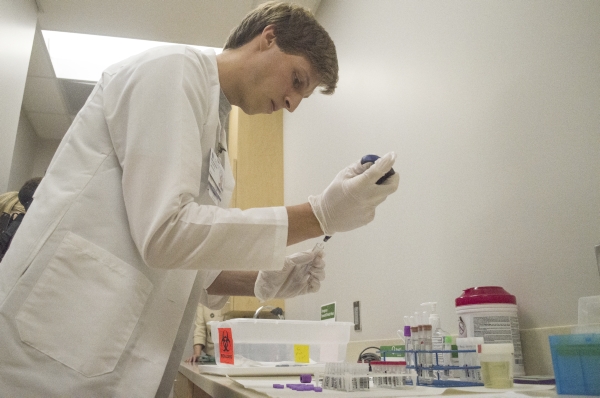 KANNAPOLIS — It’s always been a part of the North Carolina Research Campus, but Duke University’s MURDOCK Study sat entirely in a former clothing store until this summer.

In July, a portion of the MURDOCK Study moved into a 5,000-square-foot office space in the North Carolina Research Campus Medical Plaza. It houses about two-thirds of the MURDOCK Study’s staff, with the other third remaining at Duke’s previous facility in an old Dress Barn building in downtown Kannapolis.

“We’re also at a point with the study that we are beginning to expand and use the population that we’ve recruited,” Newby said. “That creates a number of opportunities to generate new studies for those individuals who have volunteers, and to do that we need space.”

The MURDOCK Study — Measurement to Understand the Reclassification of Disease of Cabarrus/Kannapolis — is a longitudinal study at the N.C. Research Campus aimed at reclassifying health and disease with advanced scientific technology, expert Duke researchers and a local network of partners. So far, the study has 11,845 participants. The study’s ultimate goal is to reach 50,000 participants.

Participant visits to the MURDOCK Study’s offices will likely be at the new office space, which was recently renovated as part of the relocation. Newby said the new office space — off of Wellness Way — will primarily be for clinical interactions with the study’s participants. Additional privacy is among the chief benefits, Newby said.

Previously, the MURDOCK Study reserved spaces at various sites for participant enrollment. Duke representatives say that will still happen, but at a smaller rate and only for convenience because of the new office space.

Even with fresh, new office space, the former Dress Barn building will still serve a purpose, Newby said. It will be a reception area for data management and non-clinical interaction with participants and volunteers.

The new building isn’t significantly closer to the main cluster of the North Carolina Research Campus. However, Victoria Christian, operation founder of the MURDOCK Study, said it provides a significant opportunity for new partnerships.

“The MURDOCK Study’s potential continues to evolve as its reach and scope exceed what we could have imagined when we first designed the study,” Christian said. “New partnerships with the (research campus) and our growing portfolio of projects with the (David H. Murdock Research Institute) are essential to our continued growth and realization of what is possible.”

With the new building, the MURDOCK Study will also be able to store and use larger, more permanent equipment without lugging it to various locations, Newby said.

Everyone at NCRC can now enroll in Duke’s MURDOCK…