County fair stays closed Friday due to weather; may open this afternoon 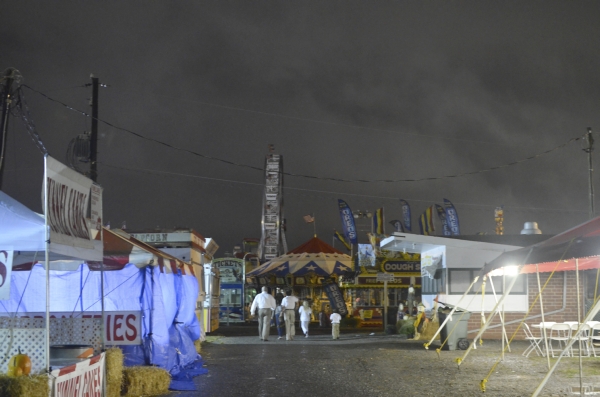 The Basinger family walks out through the deserted midway at the Rowan County Fairgrounds Friday night. The opening night of the fair was rained out for the first time in at least two decades. Hugh Fisher/For the Salisbury Post

SALISBURY — For the first time in at least 20 years, if not longer, the opening day of the Rowan County Fair was rained out.

Instead of bright lights and the sounds of crowds, Friday night saw a dark, muddy midway, tarp-covered concession stands and an almost empty parking lot.

But there’s a silver lining to every cloud – in this case, literally – and Fair Manager Johnny Love was quick to find it.

As staff gathered inside for a late supper around 8 p.m., Love said he couldn’t be too mad about the rain because of how the summer drought has hurt Rowan’s farmers.

“A lot of people had a real tight summer,” Love said. “With orchard grass over $8 a bale and straw over $5 a bale, maybe this rain will help some farmers get through the winter.”

Rowan County Fair staff said they could only recall a few times that rain had kept the gates shut during the last few decades.

The fairgrounds were scheduled to open at 4 p.m. Friday.

“At 4 o’clock, I got up with the people who run the rides, and we looked at the forecast,” Love said.

They waited until 6 p.m. to see if the rain might let up, “and then we decided that, for safety reasons, we would rather not open than see someone possibly get hurt,” Love said.

The fair is scheduled to open today at 1 p.m., but the weather may not cooperate.

Before press time, the National Weather Service was predicting cloudy skies and a 70 percent chance of rain, with a high in the upper 60s.

Love said organizers would keep an eye on weather reports and make their decision by the afternoon.

People who are planning to go to the fair should check the Rowan County Fair Facebook page or call the fairgrounds at 704-640-2326 to find out if and when the fair will open.

Even with the midway closed and the rides shut down, the fairgrounds weren’t completely deserted.

A sizable audience of friends and family members gathered to watch the youth goat showmanship competition take place inside the livestock arena.

John and Michelle Basinger were there with their children, J.D., Mia Claire and Cyrus Henry.

Mia and J.D. said they enjoyed the competition, and weren’t too disappointed by the fair being closed.

“I kind of liked it,” Michelle Basinger said. “We didn’t have to worry about the kids running off to ride the rides!”

Besides, they’ll be back today for the next phase of the competition.

There was light and life inside the barns as well. Some exhibitors were just arriving with their livestock, while others tended their flocks by night.

Casey Britt, of Mooresboro, and her parents brought goats back to the pens after the competition was over.

Britt, who took second place in the intermediate-level showmanship competition, said it wasn’t unusual to compete without a county fair crowd.

“We’re kind of used to showing with a fair or without one,” said Cindy Britt, Casey’s mother. The family shows goats at spring shows, outside of fair season.

Full information on the Rowan County Fair, including an events schedule, is online at www.rowancountyfair.net.