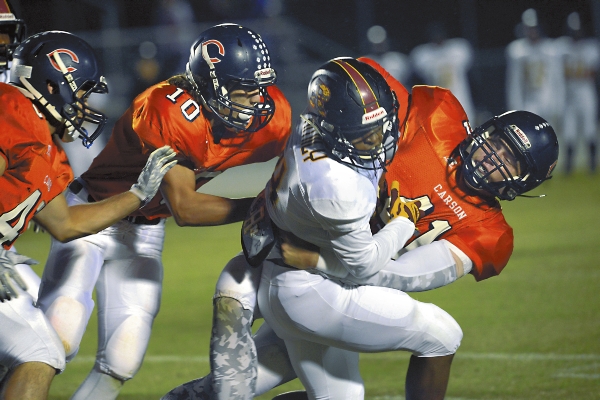 photo by Wayne Hinshaw/for the Salisbury Post ... Carson’s Ryan Bearden (41) gets help from teammates Andrew Jerman (10) and Jacob McCurry (40) to bring down Robinson running back Josh Rutherford. Rutherford scored three touchdowns for the Bulldogs in the 28-6 win.

CHINA GROVE — Carson coach Joe Pinyan shook his head and pointed at the parking lot.
“The story tonight is on that bus leaving here,” Pinyan said.
On that bus were Jay M. Robinson High Bulldogs, and their turnaround season continued with a dominating and soaking-wet, 28-6 win against the Cougars.
Robinson was 0-11 in coach Joe Glass’ first season in 2014, but a move down from 4A to 3A, new players, new staff members and new attitudes have worked wonders.
“I don’t think anyone worked harder in the offseason than we did to get better,” Glass said. “We’ve got 22 seniors and we’ve also added some wideouts we didn’t have last year. They’re forcing teams to play us a little different.”
Robinson is 4-2 overall and 3-2 in the SPC and firmly believes it should be 6-0 right now. Mistakes cost the Bulldogs tough struggles with Hickory Ridge and West Rowan, but they didn’t have any turnovers against Carson (3-2, 1-2 SPC) — a club that has feasted all season on turnovers.
“I can’t fault our effort any,” Pinyan said. “But Robinson was the better team tonight. They got after us pretty good. They ‘out-physicaled’ us, they outplayed us and they made a lot fewer mistakes than we did. We’ve got to eliminate the mistakes.”
Robinson nose guard Desmond “Bo” Mason is listed at 330 pounds — and played bigger. There was no way Carson could run the ball between the tackles.
“He’s big, and it’s not like he’s slow,” Glass said with a smile. “When Bo gets rolling, he’s hard to stop.”
Workhorse running back Josh Rutherford scored three touchdowns and allowed Robinson to control the ball for long stretches. QB Josh Dale’s stats were hurt by drops, but he fired a second-quarter TD to Daniel Spencer for a 14-0 second-quarter lead.
Most of Carson’s modest offensive production came on one play — a 76-yard sweep left by Austin Lear.
“All the blocks fell just right on that play,” said Lear, who got a good one from fullback Dylan Livengood and another from receiver Brandon Huneycutt and was suddenly tight-roping his way down the Carson sideline in the waning seconds of the third quarter.
Robinson DBs chased Lear for the final 50 yards, but he managed to elude them, bobbing and weaving 10 yards at a time to cut Carson’s deficit to 21-6.
“I’m not that fast,” Lear said with a smile. “I had to keep juking all the way to the end zone or they would’ve caught me.”
Robinson roared 55 yards to score right out of the gate and that set the tone. It was an uptempo, no-huddle drive, all on the ground, and featured Rutherford’s vision and tenacity.
“He’s one of those one-step backs who sees the hole and hits it quick,” Glass said.
Carson’s own initial drive had a lot to do with how the night unfolded. Carson ran four plays — Owen White passes to Huneycutt and Livengood and runs by White and Austin Lear — for four first downs and was suddenly on the Robinson 17.
“We were gonna score right back at them,” Pinyan said. “But then we had some missed assignments.”
On fourth down, Pinyan called on Cole Howard for a field goal, but his kick was wide left.
It all kind of tumbled downhill from there.
Carson got a stop, but muffed the punt.
Carson was in position for a drive-stopping sack, but committed a face mask penalty when Dale ducked under nose tackle Austin Russ.
Robinson put the ball on the ground four times, but Carson couldn’t recover any of them. One loose ball actually bounced directly to the back who’d just lost the handle. Que Reid gratefully picked it up without breaking stride and fought for positive yards.
Ryan Bearden blocked a punt, but the ball wobbled in the wrong direction for the Cougars.
Huneycutt was open deep for six on one snap, but White was running for his life, couldn’t see him and threw an interception.
And so it went.
Pinyan had hope when Carson’s defense got enough stops to get to halftime down only 14-0, and he had still had hope when Lear’s TD made it 21-6.
But it was pouring rain in the third quarter and early in the fourth, and Robinson’s defense finally finished off the Cougars with back-to-back sacks of White by Mark Perkins. Mason helped out on one of them.
“The weather didn’t help us any as far as coming back,” Huneycutt said. “But mostly it was Robinson. They were big and they were a good team. Definitely, they were the best we’ve played this season.”