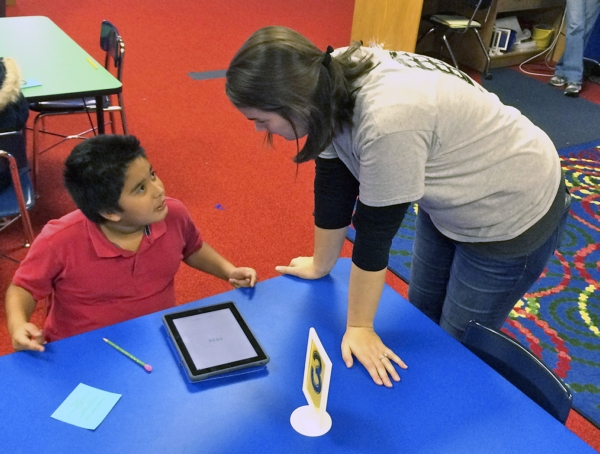 David Hernandez Mejia receives instruction from Ann Gregson about how to set up his iPad at Knollwood School. Post file photo

Thank you, Dean Hunter, for saying what so many think! Blaming kids, teachers, technology but taking no direct responsibility speaks volumes, in my opinion.

If the explanation is that some systems have seen great results — i.e., Mooresville — then wouldn’t it seem equally as important that RSS do the work Mooresville has done to get these results, not just try to claim the prize without the preparation? Teachers and students in RSS are victims of this process…. Not the cause of the failure.

I agree with Moody. Letter grades do not reflect what is really going on in the classrooms. They are an indication of the short sightedness of many state legislators who wish to find excuses to bleed funds from public education and use them for private schools in my humble opinion. It is possible to think that our state legislators want to destroy North Carolina public education and complete the re-segregation of our schools.

So the “injustice” is the public’s lack of understanding of what’s behind the mediocre C or D or F grades? Got it!

I’m sure when our intelligent, forward-thinking commissioners present prospective new businesses with the new logo and the new letterheads, the prospects will come running.

Rowan County’s website gets a million-plus pageviews a year, so I’d hope county elected officials would invest more into their own website.

Aristotle designed the last Convention and Visitors Bureau website and I think it is was around $60K. So now you’re paying around $90K for a redesign. I can see that; however, I would really like to see the current web site’s statistics (analytics).

Looks like to me that some are wanting racial problems so bad they can’t stand it. It’s all they talk about. I’m not seeing racial problems among the people who live in Rowan County and Salisbury. I’m not hearing about any black on white or white on black crimes. Gangs and drugs are the biggest problem we have in Rowan County and Salisbury and those crimes are being committed by both races. … We need problem solvers not problem creators!

Solutions? I can remember back in the late ‘90s, when Mr. Hardin offered up solutions to a growing street problem (gangs), only to fall on deaf ears. Salisbury is a small quaint town that is totally out of touch with its citizenry.

Salisbury’s taxes are ridiculous for the services rendered. Now the city is requesting the citizens do their own policing. What else will we be asked to do that our taxes should provide? We need a new city council.

Chris and those who are running for office and/or have a grudge against the city are already milking the situation for all its worth, politically. But the simple truth is that the first defense against criminal activity is people who keep their eyes open and have the courage to speak out and stand up against criminals. …

For now,I would simply like to see the law on the books enforced.

This article is filled with faulty logic and Dr. Fisher becomes disrespectful, if not downright bigoted, when she cynically states, “Religious groups, under the guise of compassion, too often boost their membership in giving sanctuary to those who share their faith…” I, for one, am tired of reading such judgmental statements and I am dismayed the Post considered this a serious article on immigration reform.

My well works fine and doesn’t cost me a huge bill every month. Perk of living in the county. No need to tax me for something free.

Rowan County is finally dragged kicking and screaming into the 20th century, only 15 years into the 21st.

Where is the money coming from to fund this? Is the county going to buy the land from Duke, rent the land …? Something does not add up, why is the county doing this now while Dukeville area is still waiting for NCDENR to release their report? Sounds like Duke still has a hand in this. Something is just not right. Is Duke Energy funding this project too?

Where is the funding coming from for this endeavor? We seem to have lots of projects on our plate.

Is this like the fox guarding the hen house: Pierce proposed the commissioners designate two people to comprise a water and sewer study task force. Edds asked Pierce if he would serve on the task force. Pierce accepted and Edds volunteered himself. Water and Sewer is a great Idea that is past due.

… Friends say goodbye to one of the Jones boys

Todd was just as he was described. He didn’t have much but he would make you smile and help you if he could. I’m glad I got to know him and Mike and their families. … May you ride in heaven, my friend

I met these brothers through my husband. Some may say they look like they could chew you up and spit you out, but honestly, they are some of the nicest, kindest people I have met.

Thank you for sharing Todd’s story. He was an amazing, talented, happy young man. He touched so many people with kindness and laughter. Todd is at peace, his memories treasured.

He’s protected my children and myself when my boyfriend was absent fishing. I’m thankful he is always at Tamarac and I knew where to find him. … I’ll never forget the boat rides, the laughter at the campground, and him always making sure my family was OK!

Another wonderful idea from this incredible woman. She really understands community.

Evelyn is creating a new unity in Salisbury- a place where all colors, all faiths, all economic situations feel welcome and respected.

I pray to God that these two agencies provide an impact in our city, but it starts at home. Parents need to be more aware of their children’s friends. We can’t wait on the police to take back our community, we need to do it ourselves. We need to pray more and be a role model in front of our children and other children.

I am a teacher in Rowan-Salisbury School System as well as a parent.

As a teacher, I take a lot of pride in my job and the students that I teach. It highly offends me when people judge our schools, teachers, and adminstration who work hard each and everyday for our students. I want to comment on a couple things that were addressed in the article.

1. Technology is only a tool. Students are still learning from a teacher just like they always have. Yes, we use programs where students learn from a computer, but that is only for a limited amount of time each day, when guess what, the teacher is teaching in small groups to give students more personalized and differentiated learning on their level!

2. Before you judge a school based on the score they received from the state, why don’t you visit said school. Teachers and students are working very hard each day to make sure students are prepared for benchmark and end of grade testing. No, the grades aren’t wonderful, but growth was met at most schools and that is something to celebrate!

3. People have no clue what these children that sit in our classrooms day in and day out go home to each and every day. I cannot fathom some living situations as an adult, let alone as a child.

4. If you want to help change something, get involved. Volunteer to read with students a couple days a week. Just volunteer! There is a teacher and child that could use a helping hand and positive influence.

5. If you haven’t ever met Dr. Moody, why don’t you try to meet her? She is a very nice person and a good leader for our school system. She takes pride in the school system and wants to make RSSS a better place to work and learn.

Stacy Suggs Frick, I couldn’t agree more. If you keep saying that schools don’t work, then people start to believe it.

No matter what anyone says, you and I, on the front line, know how to teach, and we just want to do our job. I’m sick of everyone complaining that we need change and then they cry foul when any change is implemented.

Thank you for what you do everyday. As a parent and fellow educator, I sincerely appreciate it. I also might add that I had three children who came through the public school system, two of them through RSS, and they are all three successful and bright.

Keep up the good work!

Public education is no longer about education, but simply to further the liberal agenda. We have been told that giving every student his or her own computer would help, but we instinctively knew that this was just another incredibly expensive gimmick. In a brand-new report, we have (once again) been vindicated. Quote: “Investing heavily in school computers and classroom technology does not improve pupils’ performance, says a global study from the OECD (Organisation for Economic Co-operation and Development).” Well, duh; but that was never the goal anyway.

Rowan County may never have a true countywide water and sewer system. Commissioners, however, are wisely working on a plan... read more