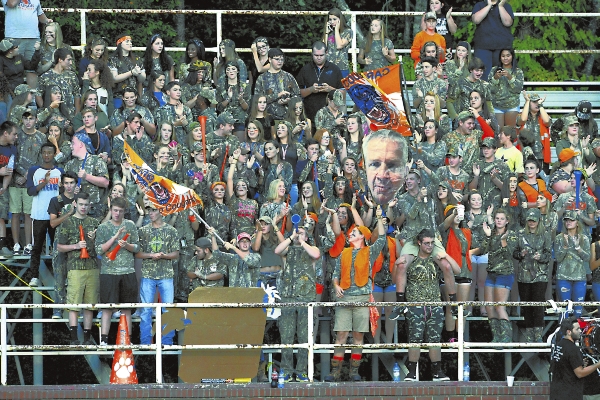 Prep football notebook …
While Salisbury has managed only one offensive touchdown the last four weeks, the Hornets’ defense has had some good moments.
Salisbury’s defense has allowed fewer rushing yards per game than any team in Rowan County and ranks second in pass defense to West Rowan.
Yet the Hornets (1-4) are allowing a hefty 33.5 points per game, an indication opponents are benefiting from turnovers and taking advantage of frequent short fields. There has also been kicking game issues.
Salisbury’s defense has produced 17 takeaways in five games — a strong rate — but the Hornets are still losing the turnover battle. They’ve coughed up 21 turnovers.
Salisbury had six more turnovers against Ledford in Friday’s 26-0 road loss.
Still, the Hornets held Ledford to one TD in the first half and to 182 yards of offense for the game. That’s the sort of defensive effort that’s usually good enough to win.
•••
Against Ledford (4-1), junior linebacker Tyquan Rivens shined again. He had nine tackles, including a sack.
Senior defensive end Naquay Simpson had two tackles for loss. Senior lineman Daniel Coats forced a fumble. Senior linebacker D.J. Alexander and junior defensive back Cordarius Montgomery made fumble recoveries. Crowder said senior safety Darius Jackson turned in a solid game.
•••
Salisbury had just 4 rushing yards against Lake Norman and basically averaged 1 yard per carry vs. Ledford, but sticking with the running game may be Salisbury’s best hope for generating offense.
Passing has been an adventure — a 25-percent completion rate, seven interceptions and no aerial TDs.
•••
Note the early start time for the Hornets’ home Friday against Surry Central — 6 p.m. Salisbury beat Surry Central in the first round of the 2A playoffs last season.

West Rowan
While most of the county has been sinking in quicksand offensively, West Rowan has stormed to No. 1 in the county in rushing offense, total offense (rushing plus passing) and scoring offense (30.8 ppg.).
The Falcons (3-1, 2-0 SPC) posted their best rushing numbers this season in Friday’s 34-6 win against Northwest Cabarrus. West cranked out 275 yards on the ground, an indication a veteran offensive line is starting to jell.
West also has been the county’s most efficient passing team, with Kacey Otto connecting on 64 percent of his attempts, and sophomore Bryant Young chipping in with a 7-for-12 effort.
“We’re getting better,” West Rowan coach Joe Nixon said. “We want to be balanced on offense and we want to be as multiple as possible. We’re getting there.”
Jovon Quarles turned in another 100-yard rushing game for the Falcons, while Otto (92) and sophomore Martavio Rankin (46) posted career bests in rushing yards.
•••
Defensively, West’s size completely overwhelmed Northwest Cabarrus. Nine NWC running plays were losses and four more were stopped for no gain.
•••
West is 74-13 in conference play since 2003.
•••
West is scheduled to host South Rowan on Friday. It’s homecoming in Mount Ulla. South hasn’t defeated the Falcons at any venue since 2000.

North Rowan
North Rowan’s game against West Stokes in King has been moved up to tonight at 7:30 p.m., due to a forecast for heavy rain this weekend.
It’s homecoming at West Stokes, a team the Cavaliers haven’t played since the schools were CCC rivals. They clashed annually from 2001-04.
West Stokes won 9-7 in a defensive struggle in 2004, but North won the other three meetings. Coach Roger Secreast was 1-0 against the Wildcats, while Avery Cutshaw was 2-1.
•••
North Rowan’s jayvee game against West Stokes will be played in Spencer on Monday.
•••
Senior receiver Trey Stoner is becoming a bigger factor for the Cavaliers every week. He had a career game with three receptions for 53 yards in Friday’s 40-14 loss to South Iredell.
Stoner has 10 catches this season.
•••
Junior Alonzo Sirleaf snagged his third TD catch against South Iredell and is up to 300 receiving yards for the season. He ranks third in the county in receiving yards.
•••
Sophomore back Xavier Haley posted his third 100-yard rushing game on Friday.
•••
Junior nose guard Stevie Thurston recovered a fumble against South Iredell.
Junior defensive end Zion DeBose had two tackles for loss against South Iredell, boosting his total for the season to 15.

Carson has also moved its games up to tonight, in order to beat the expected rainfall on Friday. Game time is 7:30.

Coach Joe Pinyan logged his 114th career head-coaching win when Carson beat East Rowan 14-6 on Friday.
Roger Secreast won 115 in Rowan County (108 at North Rowan, 7 at Salisbury) and currently ranks fifth on the county’s all-time list.
•••
Carson’s tall junior cornerback Brenden Westbrook was one of the reasons the Cougars were able to beat East Rowan.
“Brenden was matched up with the county’s leading receiver (Naquis Caldwell) and was able to shut him down for the most part,” Pinyan said. “He kept him out of the end zone.”
Westbrook also was in on 10 tackles.
•••
Carson’s defense continued its turnover onslaught with Ryan Bearden, Andrew Jerman and Garrett Pell picking off passes against East. That’s 22 in four games.
•••
Kicker Cole Howard and kick-coverage standout Chandler Herring were Carson’s best on special teams against East.
“Howard flipped the field for us every time he punter,” Pinyan said. “He kicked one right to (Max) Wall, but other than that he was able to make directional kicks where we wanted them.”
•••
Carson (3-1, 1-1 SPC) did not honor an offensive player of the week after struggling to move consistently against the Mustangs.
“We just didn’t block well,” Pinyan said. “We started out at a fast tempo and got 14 points pretty quick, but after we got up, we slowed things down and we lost our focus a little bit.”

East Rowan
East Rowan (1-4, 0-3 SPC) is on a slide and is digging a hole in the SPC despite having some of the county’s most explosive offensive players in Caldwell and backs Max Wall and Keith Tillman.
Those three have scored five TDs apiece.
The Mustangs did impress Pinyan.
“They’re very capable of winning games in this league and I think they can upset some of the better teams,” he said. “They’ve got exciting skill people, and their defense is tough and very well-coached.”
•••
Turnovers have doomed the Mustangs. They’re losing the turnover battle 22-11.
•••
East is 5-8 in county games the last three seasons. The Mustangs are off this week and get a chance to regroup. It’s not a bad week to be off. They may dodge some nasty weather.

South Rowan
South Rowan’s defense helped all its numbers in a 19-0 loss at Concord.
The Spiders, defending SPC champs, were limited to 160 rushing yards and 115 passing yards.
•••
South’s shutout loss against Concord was the fifth time the Raiders have been blanked in the last three seasons.
It doesn’t get any easier for the Raiders (0-4, 0-2 SPC) on Friday. They’re scheduled to be homecoming guests at West Rowan. South hasn’t won a game in Mount Ulla since a Rick Vanhoy-coached team rolled the Falcons 33-14 in 1995.

Davie
Davie’s 48-24 wipeout of Huntersville Hopewell on Friday surprised some, but not Davie coach Devore Holman.
“We played tough people early — Page, West Rowan, Dudley,” Holman said. “The idea was to get better before we hit conference play in the CPC.”
•••
Davie’s defense may have figured some things out. The War Eagles allowed 13 rushing yards to North Rowan and then 34 to Hopewell.
•••
Junior QB Chris Reynolds had a stellar game, throwing four TD passes.
“No one will ever outwork that kid,” Holman said. “He’s our field general, and he makes us tick. If we can protect him, we feel really good about what he can do with his arm and his legs.”
The most recent four-TD games by a Davie signal-caller were by Adam Smith against Reagan in 2011, Zach Illing against Page in 2008, and Garrett Benge in 2006 against North Forsyth, Mooresville and R.J. Reynolds.
Reynolds also rushed for a career-best 138 yards against Hopewell.
•••
Davie (2-3) has homecoming scheduled in Mocksville on Friday. It’s also the CPC opener against R.J. Reynolds.
“Reynolds has a new staff and they look like a rejuvenated team on film,” Holman said. “But we feel good about how where we are. Right now, it’s not who we play — it’s how we play.”

A.L. Brown
Still unranked, the Wonders (4-0) come off their bye week and open MECKA play with a big one at improved North Meck (4-1), a program the Wonders have handled the last two seasons.