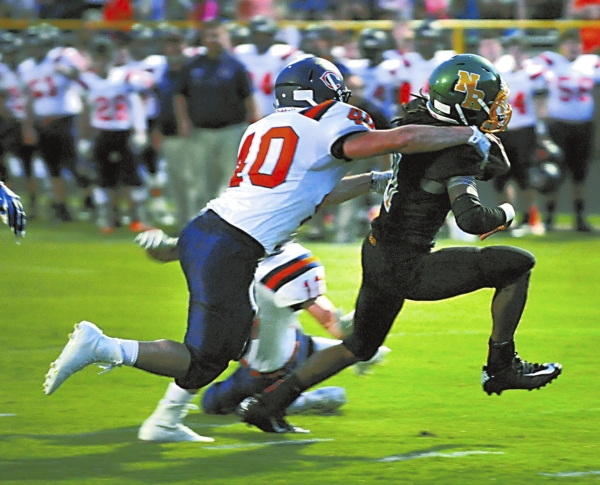 CHINA GROVE — Carson won mostly with defense again in Friday’s 14-6 victory at East Rowan, continuing a trend.
Officially, Jacob McCurry, the senior middle linebacker who’s the hub of Carson’s 3-5-3 defense, was credited by the coaching staff with a pass breakup on the final play, but McCurry is giving himself a drop.
“Everyone was celebrating and I was too, but I also was kind of mad at myself,” McCurry said. “I was dropping back, I knew I had a receiver right behind me, and then the ball hit me in the hands. That was a sure pick-six, nothing but open field in front of me, but I just didn’t catch it.”
Other than missing his chance for a defensive touchdown, McCurry had a terrific night with 13 tackles. He was constantly in the right place at the right time.
“Max Wall would’ve broken a touchdown run for East, except McCurry took a perfect angle,” Carson head coach Joe Pinyan said.
McCurry remembers that play.
“Wall made a cutback past his tackle, and I knew I had to get to the right spot or he might be gone,” McCurry said. “Fortunately, I took the right angle and made the tackle.”
McCurry had three tackles for loss and shared a sack with Logan Parker. He also had the quarterback “hurry” that created another interception for Ryan Bearden, a linebacker who already has two interceptions and four fumble recoveries.
“Ryan has been a magnet for the ball,” McCurry said with a laugh.
While Bearden (6-foot-3, 233 pounds) is the scariest Carson defender, McCurry (5-8, 189) matches him when it comes to feistiness.
“He’s an aggressive, downhill, in-your-face kid, and that’s what you want in a linebacker,” said Carson defensive coordinator David Johnson. “He’s got that same kind of tenacity his brother (Anthony) gave our defense last year. Jacob was an outside backer last year, but he really wanted to be that guy in the middle as a senior.”
Anthony McCurry, now a freshman at UNC Charlotte, wasn’t just all-county last season, he was the South Piedmont Conference Defensive Player of the Year. That’s a tough act for anyone to follow.
“I’ve always been in Anthony’s shadow some, but I’m trying to do a great job for the team,” Jacob said. “I try to be even better than Anthony was. One day my little brother (Josh McCurry is a Carson jayvee linebacker) will want to be better than me.”
McCurry has been a big part of a vastly improved Carson defense.
The numbers tell part of the story. In its first four games last season, Carson allowed 126 points. This year the Cougars have allowed 72.
In its first four games in 2014, Carson created eight turnovers. So far this season, the Cougars have come up with 15 takeaways, seven interceptions and eight fumbles.
“The biggest thing has been Coach Johnson being here from the start this year,” McCurry said. “He’s really good at showing us on film what to look for. We’ve been well-prepared.”
The win over East was large. It kept the Cougars (3-1, 1-1 SPC) in contention in a league that appears to have six or seven pretty good teams, but no super teams. It also moved the Cougars to 3-0 in county games for the first time since 2010.
“When we play East, both teams are up for it, and it’s a huge rivalry,” McCurry said. “Beating East is going to be one of the things I remember about my senior year.”
Carson lost to Central Cabarrus, 27-20, on a Friday after playing a postponed game on Monday of that same week. No one’s using that as an excuse, but it wasn’t a normal week as far as preparation time.
“The coaches told us we lost to Central mostly because we weren’t physical enough,” McCurry said. “That’s what we talked about over and over before we played East — just being physical.”
No one expected a 14-6 score, but the Cougars prevailed in the lowest-scoring game in series history. No one had ever won an East-Carson game with only two touchdowns.
“We made only five first downs and we got a field goal blocked,” Pinyan said. “That meant we had to play lights-out all night on defense, but that’s exactly what our kids did.”