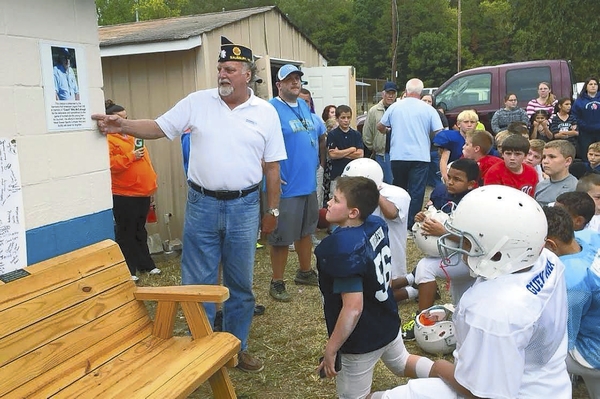 Bob Kennerly of American Legion Kennedy Hall Post 106 shows youth football players a plaque the Legion post purchased in memory of Coach Mike McCullough. The plaque was mounted this week at the West Rowan Sports Complex above a bench McCullough’s family donated there in his memory. Submitted photo

The memory of Youth Football League Coach Michael McCullough will continue to live on thanks to a new plaque from the American Legion.

The American Legion honored McCullough, who passed away last year, with a plaque on Tuesday at the West Rowan Sports Complex.

Football players, parents and community members gathered for the dedication.

The plaque sits above a wooden bench the McCullough family also dedicated to his memory and near a white poster board that states, “In loving memory of Coach McCullough Always in our Heart,” signed by the football players.

Aron Burleson, head coach of the fourth- and fifth-graders in the Youth Football Leagne and a league board member, led the dedication with a few words about McCullough.

Burleson said McCullough would make sure his kids were doing well not just on the football field, but at school and home, as well.

McCullough passed away in September of last year. He was a coach for the Rowan County Youth Football League for almost 40 years.

Allen Coren, head coach of the third- and fourth-graders, said McCullough knew football was a good way to keep kids out of trouble.

“He was more concerned about the youth and the neighborhood, to make sure that they had something to do … so that they wouldn’t be getting into something they shouldn’t be during the weekends and weekdays,” he said.

Coren, who coached with McCullough for almost 20 years, became emotional while talking about McCullough’s joy after the births of his grandchildren.

“He was looking forward to the day when he would coach, you know, he didn’t get to coach his grandsons,” he said.

Kristin Saine, McCullough’s daughter, said coming back to the place that meant so much to her father is hard, but having the plaque there was important.

“To have something in his honor at the place that was his second home, I mean that means a lot to our family,” Saine said.

Kelly Key, McCullough’s daughter, said although it was sad that the next generation will not be able to enjoy football with their grandfather, she appreciated the community support that the plaque represented.

“It’s also so sweet because it really shows how the community cares about you,” Key said.

Ashton Matthews, a seventh grader at West Rowan Middle School and former player for McCullough, said McCullough was not too strict on the players but still managed to be a good coach.

“He wasn’t one of those coaches that, if you say one word while you’re waiting in line, he doesn’t make you run three laps,” he said.

Dicy McCullough, McCullough’s wife, said McCullough was a caring person who put other’s needs in front of his own.

“Knowing how much he did give and knowing that others recognize that, too, means a lot to us,” Dicy said.