After 132 years, Stoudemire Furniture going out of business 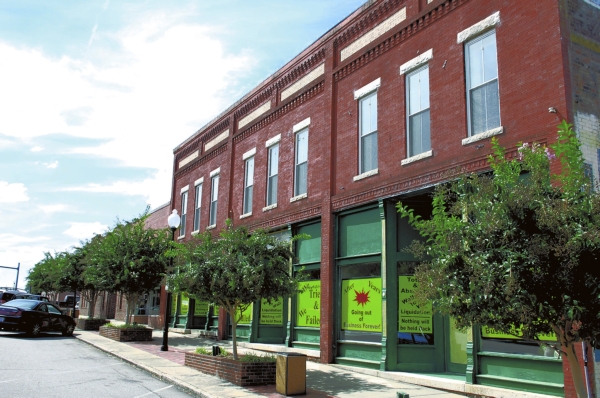 Three different storefronts make up the Julian Building, which houses Stoudemire Furniture in Spencer. The store, whose origins date back to 1883, is having a going-out-of-business sale starting today. Mark Wineka/Salisbury Post

This store on South Salisbury Avenue, across from Spencer Shops (now the N.C. Transportation Museum), once sold coffins, delivered by horse and wagon.

It was the place to go for furniture, of course, but it also sold major appliances, mattresses and even pianos. The Stoudemires — and those who married into the family — became fixtures. Longtime customers trusted them enough to call up on the telephone and ask that complete dining room or living room suites be delivered — whatever the Stoudemires thought the customers would like.

Peggy Gemayel, whose first husband was the late Jay Stoudemire, worked at the store for 75 years before finally retiring.

So it’s with some sadness that Gemayel and her onetime son-in-law, Nick Bishop, look on the going-out-of-business signs in the windows of the venerable store, whose origins actually reach back to a used furniture store in Salisbury in 1883.

Jeff Taylor, who bought the business in June, has decided to liquidate everything in the store and is starting a three-day sale today.

Bookkeeper Gary Bryant said employees were marking down every item over the past several days. The sale days will be from 10 a.m.-6 p.m. today and Friday and 10 a.m.-5 p.m. Saturday.

“He gave it a fair shot, and he tried,” Bryant said. “He just can’t seem to make it work.”

The sale inventory is worth more than $1.2 million. Taylor, who signed a year’s lease on the building when he bought the business this June, also operates Taylor’s Furniture Mart in Statesville, which will remain in business.

Gemayel was surprised Taylor would only give the Spencer store four months before giving up.

“He called me last week and said he was just not making it,” Gemayel said. “I don’t think he’s really given it a chance. … That’s not enough time to tell how a business is going to do.”

Gemayel added she was devastated for Taylor. “I feel so for him,” she said. “I’m so sorry it hasn’t worked out. He’s a very nice person.”

Advertisements for the liquidation sale said the owners “have made a heart-wrenching decision to liquidate all inventory and assets in an orderly manner as quickly as possible.”

Bishop said the building itself will be for sale.

The Stoudemire building includes three store spaces with two common walls. It’s known as the Julian Building and dates back to 1902. The post office used to give its address as 308-314 S. Salisbury Ave., but it later was changed to just 310 S. Salisbury Ave.

Early in its use, doctors and lawyers offices were located on the second floors.

The Julian Building was listed on the National Register of Historic Places in 1984. A fire in 2001 severely damaged the structure, forcing Bishop, Peggy Gemayel and her second husband, Tom (also deceased), to relocate temporarily to a storefront on Fifth Street, then to Betty Sedberry’s Art Station farther down South Salisbury Avenue.

The furniture store returned to the rebuilt Julian Building a year after the fire.

In 1883, Elizabeth Coffey “Betsy” Stoudemire started with a mostly used furniture store in Salisbury next to the Empire Hotel. Because women weren’t generally in business for themselves then, she used the name “E.E. Stoudemire.”

Betsy had another store on Fisher Street in Salisbury, It wasn’t until 1903 that the furniture store opened in Spencer. The Stoudemire family had an ownership interest in the store, but it first went by the name of other principals, Bell and Harris.

Betsy’s son and Jay Stoudemire’s father, Palmer Stoudemire, was associated with the Spencer store from its beginning. Within a few years of its opening, it became Harris and Stoudemire, then just Stoudemire Furniture Co.

The Stoudemire store in Salisbury closed between 1915 and 1920, Bishop said. Palmer Stoudemire died in 1928 just before the Depression settled on the country. Gemayel said Palmer Stoudemire was walking home to lunch when he died of a heart attack.

Jay Stoudemire, who had almost completed his pre-med education at Catawba College, “went in thinking he would take over the business for a year and sell out,” Peggy said.

“He learned to like it,” she added, and so did Peggy, who started in the store in 1940. Somehow the store made it through the Depression, and Peggy still says with pride how Jay never had to borrow a dollar.

Jay Stoudemire used to tell Peggy that his first sale at the furniture store was a piano, and he would drive her by the house where he had delivered it off the truck.

The store had a unique counter-balanced freight elevator in back that could not be replaced after the fire. Gemayel said the store lost something else after the fire — a ghost.

She and other employees heard the ghost often, usually as it walked upstairs from the front of the building back to the elevator.

“I had been there many times by myself and heard it,” Gemayel said. “It never frightened me.”

She never had any good theories on who the ghost could be.

“We have all laughed about it, but it was definitely there,” Gemayel said.

Stoudemire Furniture essentially had two floors and three buildings full of furniture and appliances in its heyday.

“We have served over seven generations, probably eight or ten by now,” Gemayel said.

Jay Stoudemire died in 1987, and Peggy married Tom Gemayel four years later, and they were together 20 years before Tom’s death.

The store holds many memories.

“I guess everything has an ending,” Gemayel said.