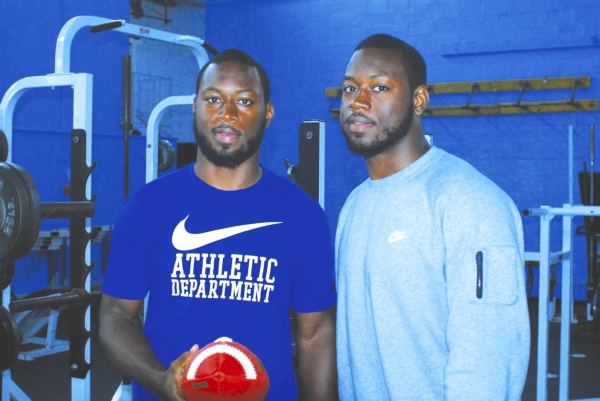 SALISBURY – Livingstone senior wide receiver Jalen Hendricks has contributed to the football program in many well-known ways. Hendricks has caught a lot of passes for a lot of yards during his career and in 2014, was the CIAA Offensive Player of the Year.

What most people don’t know is that Hendricks contributed in another way — he helped recruit two starters on this year’s squad.

Twins Jarius and Jarod Richardson played with Hendricks at Nash Central High School (Nashville, N.C.) and were juniors when the future Blue Bears’ receiver was a senior.

After graduating from Nash Central in 2013, the Richardsons enrolled at Paine College in Augusta, Ga., and were members of that school’s first year football program. They played that first year, which amounted to little more than a freshman schedule, and then in 2014, when four-year schools were added.

In fact, on Sept. 13, 2014, the Richardsons played and lost to Livingstone when the Blue Bears visited Augusta and came away with a 48-45 win. Jarius, a running back, rushed for 37 yards against his future team and scored on a 5-yard run.

At some point after last season, Paine decided to shut down its fledgling program, leaving its roster of players searching for new homes. This is where Hendricks comes in.

“Our association with Jalen was the reason that we checked into Livingstone,” said Jarod. “So that’s why we came here and things are going good and we’re happy to be here.”

The two transferred to Livingstone last spring and are starters already — Jarius in the backfield and Jarod at safety. In the first game at Benedict, Jarius rushed for 82 yards and two touchdowns. Jarod had two tackles and a pass breakup.

Jarius suffered a deep thigh bruise at Virginia-Lynchburg on Sept. 12 and sat out last Saturday’s 40-0 home win over Central International. He should be ready to go this Saturday in the CIAA opener at Bowie State.

“They are well-mannered young men and great football players … easy to coach,” said Williams. “Sometimes, you don’t even know they’re in the room, because they’re so soft spoken, but they are hard workers in the weight room and have done everything we’ve asked of them. They came in last spring and really bought into the program.

“It’s unfortunate that Paine’s program shut down, but they wanted to come here and we welcomed them with open arms,” continued Williams. “It benefited us with another running back and an older, experienced guy on defense.”

At 5-11, 196 pounds, Jarius is the biggest running back on Livingstone’s depth chart, part of the reason he’s won the starting job thus far.

“He’s the starter because he has nice size, does a lot of things well, including catching the ball out of the backfield and blocking really well when we need him to do so,” Williams said of Jarius. “We have a tough stretch coming up, starting Saturday through October, so we’ll need all of our running backs, but right now, he’s our feature back.”

Jarod is also 5-11, but weighs more at 213 pounds. “Jarod’s a little bit of a tweener, as we have him at outside linebacker some and safety,” explained Williams. “But he’s working hard and getting adjusted to the defense that we run.”

In high school, Jarod played linebacker but also saw a little action at fullback. Jarius was a running back and played some cornerback. “But I didn’t much like playing defense,” quipped Jarius.

The brothers, who actually lived in Bunn, outside of Nashville, are the sons of April Richardson and Antonio Richardson. They are fraternal twins, but seem identical at first glance. “Yes, mom even mixes us up sometimes,” chuckled Jarod.

The twins have been inseparable, so it’s no surprise that they’re both business administration majors.

“Everything we do, we’ve always done it together,” said Jarius. “There was never a thought of one going to Paine or coming here without the other one.”

By Mike London mike.london@salisburypost.com SALISBURY — Catawba nose guard Jonathan Jean, one of the heroes of Saturday’s 14-7 win at... read more